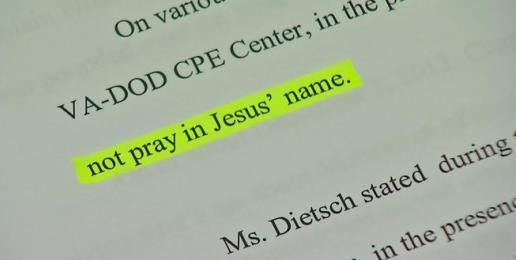 Two military chaplains have filed a lawsuit in federal court against the Department of Veterans Affairs (VA), alleging religious harassment during a VA chaplaincy training program.  Retired U.S. Army Major Steven Firtko and Navy Commander Dan Klender were participants in the Clinical Pastoral Education Program operated by the San Diego office of the Veterans Affairs Department.  The program trains and assigns chaplains to VA hospitals and medical centers in the San Diego area.

The lawsuit claims that Nancy Dietsch, the program’s supervisor, repeatedly mocked and ridiculed the two chaplains for their Christian convictions.

The suit alleges that Dietsch told students they were not to quote from the Bible during classroom discussions, and that she did not permit chaplains to pray “in the name of Jesus” at public ceremonies.

On one occasion, Firtko says he made reference to the Lord’s Prayer in class, and Dietsch pounded on the table angrily, shouting “Do not quote Scripture in this class.”

Dietsch also allegedly derided Biblical standards on salvation, saying that there were many ways to heaven, and that no one religion is right.  Firtko says Dietsch further stated that if he held to his beliefs about evolution and homosexuality, he did not  “belong in the program.”

The lawsuit claims that Dietsch threatened to remove Firtko from the program unless he chose to renounce his Biblical beliefs.  When he refused to do so, he was placed on probation.  Firtko was subsequently notified in a letter that he had been dismissed from the program.  Klander left the program voluntarily, saying he was no longer interested in being subject to Dietsch’s harassment.

The lawsuit has been filed by the Military-Veterans Advocacy group on behalf of the chaplains’ sponsoring organization, the Conservative Baptist Association of America.  John Wells, a former navy commander and attorney for the group, says no solider should be subjected to anti-religious bigotry.

“No American choosing to serve in the Armed Forces should be openly ridiculed for his Christian faith.  Not only was the treatment these men received inappropriate, it was also a violation of the Religious Freedom Protection Act and the religious freedom guarantees of the First Amendment.”

This is just the latest episode unearthed by Fox News reporter Todd Starnes detailing hostility to the Christian faith in military circles.  And it is not the first time such anti-Christian bigotry has been reported in the Department of Veterans Affairs.

The VA was the center of controversy two years ago when veterans groups were outraged over developments at the National Cemetery in Houston, Texas.

The orders came from cemetery director Arleen Occasio, who also ordered that the chapel’s bell chimes no longer be rung.  She then proceeded to remove the cross, the Bible, and the Star of David form the chapel, and convert the building to storage space.

During the Memorial Day ceremony that year, Occasio informed Pastor Scott Rainey that he would be removed from the program unless he promised to eliminate the name of Jesus from any of his prayers.

The U.S. Department of Veterans Affairs subsequently entered into a consent agreement in federal court preserving freedom of religious expression during burial services at veterans’ cemeteries.

The VA agreed not to “ban, regulate, or otherwise interfere with prayers, recitations, or words of religious expression…”  U.S. District Judge Lynn Hughes ordered Occasio not to dictate the content of prayers or speeches, “whether denominational prayers or otherwise.”