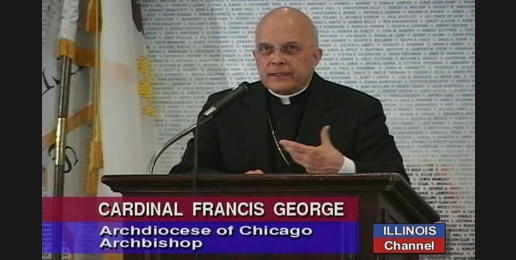 Cardinal Francis George has criticized Mayor Rahm Emanuel’s recent comments on Chick-fil-A, a restaurant chain whose president said recently that he believes marriage is the union of a man and a woman.

“Chick-fil-A’s values are not Chicago values,” Emanuel said in response. “They’re not respectful of our residents, our neighbors and our family members. And if you’re gonna be part of the Chicago community, you should reflect Chicago values.”

Recent comments by those who administer our city seem to assume that the city government can decide for everyone what are the “values” that must be held by citizens of Chicago. I was born and raised here, and my understanding of being a Chicagoan never included submitting my value system to the government for approval. Must those whose personal values do not conform to those of the government of the day move from the city? Is the City Council going to set up a “Council Committee on Un-Chicagoan Activities” and call those of us who are suspect to appear before it? I would have argued a few days ago that I believe such a move is, if I can borrow a phrase, “un-Chicagoan.”

“The value in question is espousal of ‘gender-free marriage,’” he continued. “Approval of state-sponsored homosexual unions has very quickly become a litmus test for bigotry; and espousing the understanding of marriage that has prevailed among all peoples throughout human history is now, supposedly, outside the American consensus.”

“Was Jesus a bigot?” Cardinal George added. “Could Jesus be accepted as a Chicagoan? Would Jesus be more ‘enlightened’ if he had the privilege of living in our society? One is welcome to believe that, of course; but it should not become the official state religion, at least not in a land that still fancies itself free. Surely there must be a way to properly respect people who are gay or lesbian without using civil law to undermine the nature of marriage.”