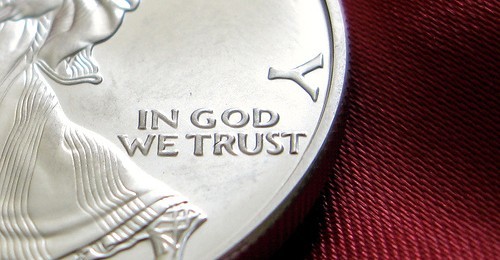 In a recent meeting of the Marion City Council, local resident Ken Kessler proposed erecting a display of the Ten Commandments that would stand in a public square. There have been two meetings so far where the issue has been discussed, but no decision has yet been made. According to Mayor Robert L. Butler, the Ten Commandments monument will again be on the agenda during the next meeting of the Marion City Council on Wednesday, August 25th, 2010.

It didn’t take long for self-avowed atheist Rob Sherman to rush downstate to Marion and threaten the city with a lawsuit if the monument of the Ten Commandments is approved.

Sherman, who lives in northern Illinois, considers himself an authority on constitutional law regarding the intent of the Founding Fathers when it comes to the expression of religious liberty in the public square. Sherman, who drives an over-sized RV which could pass as an eighteen wheeler, rolled into Marion and lectured the town fathers about the constitutionality of the proposed Ten Commandments monument.

It must be noted that Ken Kessler is not looking for government money to pay for the religious display which has the backing of a vast majority of Marion’s citizenry. But this fact doesn’t matter to Sherman whose RV has a depiction of a penny on its side featuring his image and the humanistic, if not blasphemous words “In Rob We Trust”.

Sherman has made a name for himself by perpetuating the misinterpretation of the Establishment Clause of the First Amendment of the U.S. Constitution. Unfortunately, he has often been successful in his attempts to scrub references to America’s Judeo-Christian heritage from any public venue.

And as you may remember, the Illinois General Assembly passed a bill which was signed into law that would provide a “moment of silence” that would be observed by public school students at the beginning of each school day. Sherman used his daughter — who was attending a public high school at the time — to challenge the “moment of silence” law which many people, including teachers, believed was a good idea.

The “moment of silence” had nothing to do with prayer — unless a student wanted to use that time to pray. Sherman claimed this moment would take away from his daughter’s access to the thirty seconds of education she would miss if students observed a moment of silent reflection. Sherman found a liberal activist judge who agreed with him and the issue ended up in the courts.

Sherman has also been actively pushing his atheistic morality in another southern Illinois town. The defender of state-sanctioned atheism found another target in his visit downstate. Sherman filed a federal lawsuit against a group named “Friends of the Cross” who erected an 11 story high cross on private property. Sherman alleges the group’s use of a $20,000 state grant to pay for the Christian symbol was unconstitutional and wants the group to reimburse the state. The cross is located on private land in the Shawnee National Forest, near Alto Pass and Carbondale, in southwestern Illinois.

Individuals like Sherman bully small towns with the threat of lawsuits many of these communities cannot afford to fight. They are assisted by liberal activist judges and have had considerable success as these jurists hand down legal rulings which are not consistent with the views of America’s constitutional framers.

From Sherman’s own website — and in his own words — he uses bullying tactics when he writes the Mayor of Marion can expect “… the prospect of a long, expensive and losing legal battle if he tries it.”

In 1958, a Supreme Court Justice demonstrated prophetic insight in giving his dissenting opinion concerning the case Baer v. Kolmorgen. He warned that the Court must be careful in its usage of the term “separation of church and state” because the public would believe those words appeared within the body of the Constitution. In the future, there might be some who would falsely attribute the phrase to the document itself. This judge truly had a vision of what was to come.

Today, far too many Americans believe that the phrase “separation of church and state” was indeed written somewhere in the U.S. Constitution. The truth is the phrase appears in no formal document penned by the Founding Fathers. But it has been used by liberal judicial activists and the judiciary to attack publicly funded monuments and other displays which represent America’s Judeo-Christian history.

Many of the absurd rulings handed down by American courts during the last 40 years have resulted from the misinterpretation of the Establishment Clause. Something called the “right to privacy” has trumped natural law and, subsequently, religious liberty in America. The Roe v. Wade decision which legalized abortion in 1973 was based on the specious argument of the “right to privacy”. Laws which a vast majority of Americans agree with have been struck down, due to the fact the private desires or wishes of one individual hold sway over the majority despite the fact the United States is a democratic republic. But many have used the courts to circumvent the rights of the people. The words “of the people, by the people and for the people” have fell victim to the corruption of the word “tolerance” in our society.

The Mayor and City Council of Marion have yet to decide whether the monument featuring the Ten Commandments will stand in Tower Square. Whether or not Sherman will be successful in his lawsuit against “Friends of the Cross” will be decided by the courts. However, we can all pray Americans and people of faith will find the wherewithal to fend off the continuing attacks regarding the expression of religious liberty in our society. It must be noted Marion’s Mayor and City Council say if someone of another faith desires to put up a display in Tower Square, they will be permitted to do so, if the proposed Ten Commandments monument is approved.