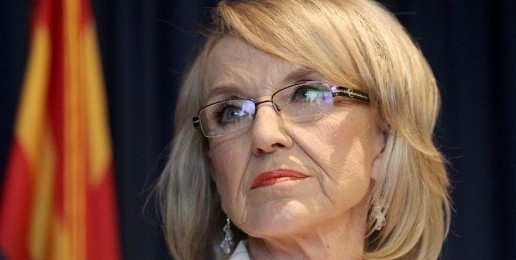 Arizona Governor Jan Brewer vetoed the law that would have protected the right of people of faith to refuse to be part of homosexual faux-weddings. In so doing, she helped chisel out another chink in the constitutional wall that protects the free exercise of religion. Apparently, she does not possess the spine to withstand pressure from corporations and feckless politicians like John McCain and Mitt Romney who urged her to veto the bill.

Pastor and theologian Doug Wilson has this  to say about the Arizona debacle:

When [the Holy Spirit] is manifest, when the wind stirs, the church has the mojo. When it is not, then the GOP, and Romney, and the NFL, all feel safe in saying that Arizona should much rather provoke the evangelicals than provoke the gayboys.

The Left persists in exploiting the stupid and dishonest comparison of homosexuality to race (or skin color) because it works. And it works in part because conservatives are too cowardly or lazy to challenge it every time a “progressive” trots it out, which is daily.

Skin color is 100% heritable, in all cases immutable, not constituted by subjective feelings, and carries no behavioral implications amenable to moral assessment.

Homosexuality, in contrast, is not 100 percent heritable, is in some cases mutable (or fluid as queer theorists describe it), and constituted centrally by subjective feelings and volitional sexual acts that are legitimate objects of moral assessment.

So, if the Left wants to construct a sound analogy, they need to find a suitable analogue like perhaps polyamory or consensual adult incest. Will the government at the behest of sexual transgressives one day require Christian bakers and florists to use their labors in the service of polyamorous or incestuous ceremonies, which are arguably less perverse than homosexual “weddings”?

Christians need to strengthen their rubbery spines and find their lost chests, which is difficult to do with the church’s anemic preaching. Doug Wilson paints a dark picture of what much of contemporary preaching portends:

When men preach boldly—as when they declare that sin is bad and Jesus is good—it is easy to represent them as having a go-to-hell dismissiveness about them. But it is actually the opposite. Those ministers who crawl on hands and knees in order to obtain the respect of the world—an odd way of proceeding, I should think—are those whose mealy-pulpitoons amount to a wish that the world would continue on its way to Hell, not warned, not rebuked, not hindered in any way. And those who try to stand across the way are accused of having engineered the way in the first place, and of harboring a not-so-secret wish that all non-Christians would tumble headlong into the Abyss.

If our preachers manage to hoist themselves off their hands and knees, here are some anchoring (and bracing) thoughts from Wilson to help them preach boldly:

As conservative Christians, we are accustomed to discuss homosexual issues in the light of Romans 1. There Paul tells us that our gay pride parades are the result of refusing to honor God as God, and refusing to give Him thanks. Nothing is plainer to exegetes—who are not selling out, or who don’t have a gun to their head—than the fact that an apostle of Jesus Christ taught us that for a man to burn with lust for another man was unnatural, and that for a woman to burn with lust for another woman was even more unnatural. But that is not the point I would like to make, although the point I need to make assumes this. We need to go on to see that this chapter teaches us something else quite important about our current controversies.

The wrath of God is described in this chapter, and it is described as God giving people over to their desires. The mercy of God is found in the restraints He places on us, and His wrath is revealed from heaven whenever He lets us run headlong, which is what is happening to us now. This wrath is described this same way again a couple verses later. God gave them up to dishonorable passions. It is repeated a third time just a moment later. God gave them up to a debased mind. When God lets go, that is His wrath. As Lewis says somewhere, Heaven is when we say to God “thy will be done.” Hell is when He says that to us.

So what consequences follow when He lets go? What does this wrath look like when it is visited on a culture?

The next point is often missed. This progression amounts to the wrath of God being revealed against us because we are being delivered up to the tender mercies of the wicked, which are cruel. Notice Paul’s description of what these people are like outside the bedroom. Right after his observations on men burning in lust for men, and women for women, he gives us an additional character description.

“And even as they did not like to retain God in their knowledge, God gave them over to a reprobate mind, to do those things which are not convenient; being filled with all unrighteousness, fornication, wickedness, covetousness, maliciousness; full of envy, murder, debate, deceit, malignity; whisperers, backbiters, haters of God, despiteful, proud, boasters, inventors of evil things, disobedient to parents, without understanding, covenantbreakers, without natural affection, implacable, unmerciful . . .” .

Now who do you want to put in charge of the new civility? Who do you want as an arbiter of true sensitivity in speech? Who should run the training seminars for all the big corporations on what “hate” is? Who should set the boundaries for acceptable public discourse? Who should be the appointed gatekeepers on what constitutes tolerant speech? For any Christian who has read Romans 1 rightly, not these people.

They don’t know what tolerance is. They don’t know how to spell it. They hate the very idea of it. They have taken the biblical doctrine of tolerance and have filed it into a shiv, so that they might smite us all under the fifth rib, as Joab did to people. This should not be surprising to us. Someone who finds the anus of another the object of his desire is not someone that I would trust to determine whether or not this sentence is a hate crime. They are liars and filled with all malice. They are backbiters, overflowing with malignity. They are implacable.

So if you want to form a brigade of tolerance cops, that is bad enough, but then, when you want to staff the whole brigade with these people, the entire spectacle turns into how the right panel of The Garden of Earthly Delights would look if Bosch had just taken three hits of acid just before painting it. The way of peace they have not known. There is no fear of God before their eyes. The only thing that their lawlessness can really do well is breed more lawlessness . So I know! Let’s put them in charge of civility in public discourse.