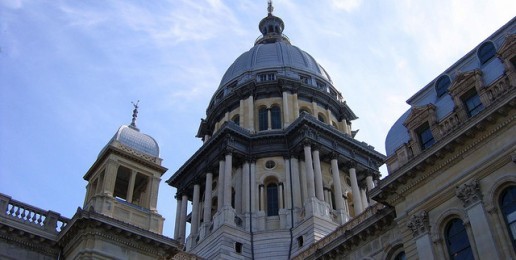 Civil unions aren’t just for same sex couples, a Decatur Herald-Review story fittingly points out on Valentine’s Day, there are a growing number of opposite sex Illinois couples opting for civil unions over marriage. And it’s not so much about love as it is dollars.

Civil unions between opposite sex couples allow two people to live together with all the beneftis of marriage, but without losing Social Security and pension checks from their deceased spouses’ estate they would lose if they legally were to marry again.

Seems deceptive and dishonest, doesn’t it? But it isn’t. At least it wasn’t when State Rep. Greg Harris (D-Chicago), who sponsored the 2010 civil union legislation, spoke openly about how senior citizens could do exactly what many are now doing – still tapping into sources of income they would lose if they remarried. And the AARP backed this whole scam by supporting civil unions in the Illinois Capitol. From a December 2010 IR story:

During the House floor debate on civil unions, Harris told his colleagues that Illinois senior citizens as a whole would possibly benefit more than same sex couples from legalizing civil unions because under civil unions they could have the best of both worlds — maintain their federal Social Security benefits and still gain the right to jointly occupy nursing homes as well as determine their partner’s medical care.

McLean County’s seeing opposite sex civil unions – and they, too are not for love, but for financial benefits, courthouse staffer Robin Wilt said:

“The straight couples, in my experience, are really doing it mostly for insurance purposes,” Wilt said. “One couple I talked to at length really did not like the institution of marriage that much, but what you end up finding out is they’re probably protecting something. It’s a loophole that at some point will probably be filled.”

The U.S. Census Bureau has reported that from 1990 to 1999, the percentage of unmarried senior couples 65 and older rose significantly. Forbes reports “In 2006, 1.8 million Americans aged 50 and above lived in heterosexual “unmarried-partner households,” a 50% increase from 2000.  Here are the financial reasons seniors cohabit or now go for Illinois civil union licenses:

Here’s five questions Illinois Review asked about civil unions in December 2010 which still remain unanswered – either in statute or in regulation – because we’re just learning how civil unions will affect state marriage laws.  Some of these, the courts will need to decide.  Or insurance companies and the  Social Security Administration:

1.  Will senior citizens joined in either same sex or opposite sex civil unions be allowed to  continue identifying themselves as “non-married” in order to receive maximum Social Security survivor benefits, as State Rep. Greg Harris suggested in his House floor debate introduction of the bill?

2.  Will those listed on Illinois state employee rolls as receiving health care and pension benefits due to being involved in a domestic partnership now be required to enter a civil union in order to continue coverage?

3.  How will those united in civil unions have their union designated from traditional marriage?  Will government forms need to be changed in order to offer civil union as an option — “single, divorced, married, in a civil union”?  Will employers be entitled to know the specifics of the relationship?

4.  How will those in civil unions be identified — Mr & Mr, Mr & Mrs. Mrs & Mrs, Ms & Ms, and how will it be determined whose names the union uses on their legal identifications?  Will those surnames be used on the children’s birth certificates?  And will children adopted or brought into a same sex civil union with the assistance of a surrogate or artificial insemination also be listed on the child’s birth certificate?

5.  Will those name changes be allowed because of the civil union license, or will a judge need to order the validity of the identification change because it is not the result of licensed traditional marriage?