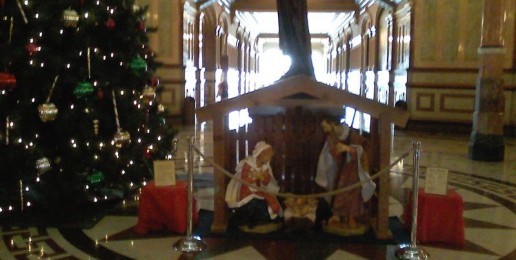 On Tuesday, November 29, 2011, the Springfield Nativity Scene Committee (SNSC) will again erect a natNativity Scene depicting the birth of Jesus Christ. For the third year in a row, the crèche will stand in the State Capitol Rotunda Building in Springfield, Illinois.

In 2008, the SNSC made history when the Secretary of State’s office granted a permit to the group, allowing the Nativity Scene to go on display. The crèche stood in the State Capitol Building, in accordance with the U.S. Constitution which provides for such religious expression in the public square as long as such displays are privately-funded.

The SNSC’s primary goal is to celebrate the birth of Jesus Christ. A secondary mission of the group is to inform the public regarding the constitutionality of such expressions of faith in the public square.

Most Rev. Thomas Paprocki, Bishop of Springfield’s Roman Catholic Diocese, will address those gathered in the Rotunda to celebrate and bear renewed witness to the birth of Our Lord and Savior Jesus Christ.

Tom Brejcha, Esq., president and chief counsel of the Chicago-based Thomas More Society, a member of the SNSC and its legal counsel, will briefly explain the constitutional rights of private citizens to erect Nativity Scene as a form of free speech and free exercise of religion in America’s “public square”. Other SNSC members scheduled to speak include Beth Rogers of Springfield, pro-family activist; Dave Smith, Executive Director of the Illinois Family Institute; and Arlene Sawicki, a pro-family activist from South Barrington.