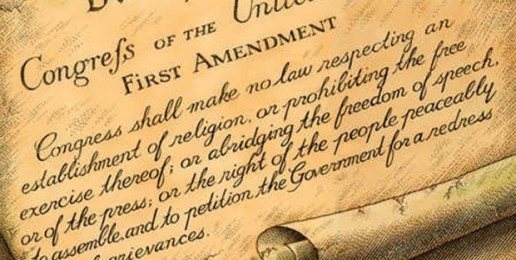 Properly understood, the Bill of Rights does not prevent government regulation of guns or of videogames that depict deadly gun violence
07.08.10
PRINT

From Morality In Media

NEW YORK (July 7, 2010) – On June 28, the Supreme Court held once again that the Second Amendment protects the people’s right to keep and bear arms. The Court also said, however, that this is not “a right to keep and carry any weapon whatsoever in any manner whatsoever and for whatever purpose.” In other words, some regulation of guns is permissible. Earlier this year, the Court also agreed to review a lower court decision that invalidated a law intended to restrict children’s access to certain violent video games, including some that depict deadly gun violence.

Robert Peters, President of Morality In Media, had the following comments:

I must say that I have mixed emotions about guns.

On the one hand, I grew up in a community where many citizens owned guns and where guns were frequently used to hunt wildlife but never to unlawfully shoot human beings. I therefore take issue with those who would blame the increase in gun violence on availability of guns. Guns don’t commit crimes; people do; and if we want to understand why, according Uniform Crime Reports statistics, the “Murder and non-negligent manslaughter rate” rose from 5.1 in 1960 (when I was in grade school) to 10.2 in 1980, we must look beyond mere availability of guns.

On the other hand, I have lived since 1971 in New York City, where hunting rabbits and squirrels is indeed rare, but where all too many residents, young and old, get shot each year without legal justification. In good conscience, therefore, I must support reasonable regulation of guns.

I support reasonable regulation even though I agree with two recent Supreme Court decisions holding that the Second Amendment protects the right of the American people to keep and bear arms, regardless of a connection to state militias.

In both decisions, the Court pointed out that the Second Amendment does not confer “a right to keep and carry any weapon whatsoever in any manner whatsoever and for whatever purpose.” Were it otherwise, citizens known to have terrorist sympathies could board planes with automatic weapons and violent criminals could have guns while serving time in prison for using guns to commit crimes.

Similarly, in a 1957 obscenity case, Justice Brennan opined: “it is apparent that the unconditional phrasing of the First Amendment was not intended to protect every utterance.” Were it otherwise, libel, perjury, contempt of court, military insubordination, treason, threats, extortion, harassment, fraud, false advertising, inciting a riot, obscenity and child pornography, among other things, would enjoy First Amendment protection.

The Court will soon decide whether a California law that would restrict a child’s access to certain violent video games is constitutional. If the Court strikes down the law, it could decide the case narrowly, leaving the door open for the state to revise the law so as to be constitutional. Or the Court could set the bar so high that no law would withstand the Court’s “strict scrutiny,” in effect holding that no matter what the nature of the non-sexual violence or how it is depicted, no regulation is permitted.

If the decision is of the latter nature, the Court will do the nation a great disservice and prove again that our cherished Constitution is what five or more Supreme Court Justices say it is and little more. While the latter notion appeals to “progressives,” it ought to deeply concern the rest of us.

I would add that the First Amendment was not intended to confer upon adults a right to peddle sexual or violent expression that is harmful to children, without any legal obligation to restrict children’s access to it. Nor does it require of legislative bodies “god-like” precision or knowledge.

I would also add that while reasonable persons could disagree about whether the 2nd Amendment was intended to confer a general right upon citizens to keep and bear arms, the Court’s decisions should not be based on Justices’ personal views about whether gun ownership is now a wise thing. If the American people think the 2nd Amendment is outdated or that the current level of mayhem requires curtailment, they can amend the Constitution. That right belongs to the people, not to the Supreme Court.