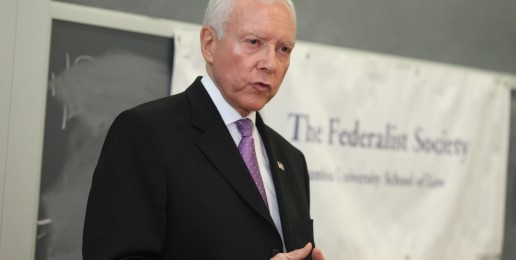 By Morality in Media, Inc.

Senator Orrin Hatch of Utah to be commended for asking U.S. Attorney General Eric Holder, ‘How is this administration enforcing federal law prohibiting…obscenity?’

NEW YORK (4/15/10) – During a hearing yesterday before the Senate Judiciary Committee, Senator Orrin Hatch of Utah asked Attorney General Eric Holder the following questions: “How is this administration enforcing federal law prohibiting…obscenity?…Will you allow the director of [the Obscenity Prosecution Task Force] to enforce federal obscenity laws without restricting him to the most extreme obscene material?” In response, the Attorney General answered that he will “certainly enforce the law.”

“Senator Orrin Hatch is to be commended for asking Attorney General Eric Holder about the new administration’s policies regarding enforcement of federal obscenity laws.

“Because of the doctrine of separation of powers and the doctrine of prosecutorial discretion, Congress cannot dictate what the Justice Department, FBI and U.S. Attorneys do.

“But that doesn’t mean Congress is helpless.

“In the first place, the Senate must confirm, among others, the Attorney General, FBI Director, and all 93 U.S. Attorneys. In the second place, Congress has oversight responsibility for the Justice Department, which includes the FBI and U.S. Attorneys. In the third place, Congress appropriates funds for the Department, and that gives Congress a say in what those agencies do or don’t do. Related to the latter power, Congress can specify what a particular appropriation is to be used for-for example, for the investigation and enforcement of federal obscenity laws.

“While the Justice Department, FBI and U.S. Attorney offices are to be commended for their efforts to curb sexual exploitation of children on the Internet, for the most part these agencies have turned a blind eye towards the explosion of hardcore adult pornography on the Internet and elsewhere. While the latter does not depict actual children, it does depict sex with persons who look like children, as well as sex with teens, family members, multiple partners, and prostitutes. It also depicts sex with animals, excretory activities, and sexual violence against women, including rape and torture.

“Part of the problem with the Justice Department and FBI’s see-little-evil in hardcore adult pornography policy is that the proliferation of this material contributes to sexual exploitation of children crimes. Children of all ages are also being exposed to this material which can interfere with their psychological and moral development and lead to sexual misconduct.

“While the Bush administration was in large measure a disappointment when it came to enforcement of federal obscenity laws, it did prove that these laws can be effectively enforced against large-scale commercial distributors of hardcore adult pornography when there is a will to do so.

“What the Obama administration should do now is build on its predecessor’s progress. The last thing our nation needs is a repeat of the ‘free ride” for commercial purveyors of obscene materials that former President Clinton and Attorney General Janet Reno provided during the 1990s.

“Senator Hatch is also to be commended for challenging the Justice Department (and FBI) policy to enforce federal obscenity laws only against the ‘most extreme obscene material.’ For one thing, all hardcore adult pornography is addictive, which leads to a variety of harms. For another, this material is readily available to children on the Internet, free of charge and without proof of age; and right now the only laws that can be enforced against hardcore adult pornography online are obscenity laws.”