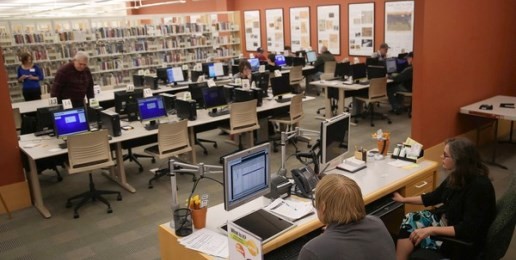 Many people think public libraries are obsolete in the age of the Internet, yet libraries remain a valuable asset to any neighborhood. But just imagine taking your kids to your local library on a beautiful, sunny day to find some good books and engage in the other activities offered. You’re hand in hand, discussing what kind of books to borrow when, to your horror, you see…

Someone on one of the library computers is looking at pornography!

This isn’t a scenario out of a parent’s worst nightmare; this is taking place in libraries around the country. A recent case involves a library in Orland Park, Illinois, where residents are now insisting that the library  install filters on public computers to block access to illegal pornography. However, opponents to filtering, which include the American Library Association (ALA), are concerned that such filters violate free speech rights and insert more government into the lives of Americans.

The ALA’s long-held position is that ALL information, regardless of content and age of user, should be available and that it’s a parent’s job, not the library’s, to protect children.

Judith Krug, ALA’s former Director of the Office for Intellectual Freedom said, “I have a real problem when people say, Well I walked by and you should have seen what was on the computer screen. Well, don’t look, sweetie. It’s none of your business. Avert your eyes.”

The ALA  states on their web site:

The primary responsibility for rearing children rests with parents. If parents want to keep certain ideas or forms of expression away from their children, they must assume the responsibility for shielding those children. Governmental institutions cannot be expected to usurp or interfere with parental obligations and responsibilities when it comes to deciding what a child may read or view.

The questions might sound ridiculous, but it’s the venue and location of any sexually explicit material that’s really in debate.

I’m thrilled to see parents insisting Internet filters be installed on the library’s computers located within sight and reach of young kids – the very computers they provide with their their hard-earned tax dollars. In a hyper-sexualized society where children are often caught in the crosshairs of marketers and advertisers, parents must be vigilant in protecting their kids. It appears the concerns of parents are at least causing the public library to reconsider its policy of no filters on the computers.

Ironically librarians lobbied for an exemption to this law and it was granted to them. Who could conceive that librarians would allow an innocent child to view all forms of deviant graphic sex online?

Is it any wonder we live in a society where sex among teens is not merely average and rising, but considered normal and celebrated? The worldwide sex-trafficking industry is growing and we are now realizing that even in America sex-trafficking is a major industry. Pedophilia is on the rise as online porn makers increasingly cater to the “barely legal” crowds. These outcomes are all reality because pornography has become so readily available online. One doesn’t have to go to the red light districts to find it. It’s available in the privacy of one’s home – or provided by your tax dollars in the library.

The Orland Park battle is heating up as the issue is one of contention with ardent supporters on both sides. And while I am a staunch defender of the First Amendment and heartily believe in the rights enumerated in the U.S. Constitution, at times we must exercise moral common sense.  Illegal pornography, or obscenity, is not protected under the First Amendment.  Nor should it be.  Those that say restricting access to illegal pornography in a public library would certainly not advocate for sex shows on public streets. The reason is that some things, though legally protected for adults, are not permissible in public.

Just as it is not permissible for a couple to engage in sex acts in public, neither should it be legal for a person to access images and videos of people engaging in sex acts on a public computer. There really is no difference.

Hopefully the Orland Park library will comply with the law and see the need and wisdom in installing filters to protect children from being exposed to illegal pornography and keep the library from being a hostile environment. The logical conclusion is to install filters that keep such content from being accidentally or intentionally accessed.

Read more about this situation here and here.

Nathan Cherry
Nathan Cherry is the chief editor and blogger for the Engage Family Minute blog, the official blog of the Family Policy Council of West Virginia. He serves also as the...
Full bio and more from Nathan Cherry