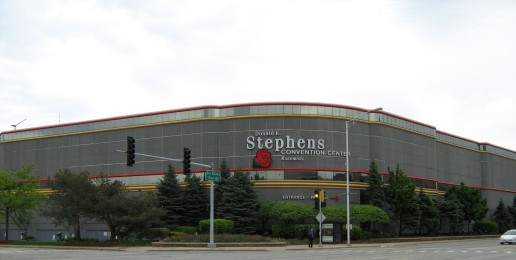 “Expositions are put on by diverse groups and associations of people and may be faith-based, politically affiliated, trade oriented or sports and entertainment associated,” Stephens said in an emailed statement. “The shows at the convention center do not reflect the position or affiliation of the village of Rosemont.”

…Stephens said decisions about which conventions are allowed are based on many factors including, fiscal impact, consumer demand,tastefulness and conduct. (emphasis added)

It’s not the first time Rosemont has hosted a sex industry convention. Last year’s Exxxtacy 2010, put on by New York-based Taboo Entertainment, brought to town more than 100 sex-themed vendors and dozens of adult film stars — including the mistresses of high-profile celebrities.

It’s interesting to note that New York is home to Morality in Media. Back in 1999 Morality in Media President Bob Peters ran an advertising campaign that generated tremendous opposition from the New York citizens against the “Erotica USA” 1999 trade show. While Mr. Peters won’t take the credit, the fact remains they never held their lewd conventions in New York City again. Apparently even New York-based Taboo Entertainment has enough sense to peddle their smut elsewhere. They know where they’re not welcome. So, who welcomed this New York-based company? You guessed it. Last year, family-friendly Rosemont threw out the welcome mat for pornographers.

If you’re not convinced and you still think that pornography is harmless entertainment, please check out www.pornharms.com. The research shows otherwise.

Obscenity, which is commonly referred to as hard-core or XXX-Rated, is not protected ‘speech’ under the First Amendment. The problem is that the laws are rarely enforced. Someone once said you have about as good of a chance of being struck by lightning as being prosecuted for obscenity.

(1) Sells, delivers or provides, or offers or agrees to sell, deliver or provide any obscene writing, picture, record or other representation or embodiment of the obscene; or
(2) Presents or directs an obscene play, dance or other performance or participates directly in that portion thereof which makes it obscene; or
(3) Publishes, exhibits or otherwise makes available anything obscene; or
(4) Performs an obscene act or otherwise presents an obscene exhibition of his body for gain; or
(5) Creates, buys, procures or possesses obscene matter or material with intent to disseminate it in violation of this Section, or of the penal laws or regulations of any other jurisdiction; or
(6) Advertises or otherwise promotes the sale of material represented or held out by him to be obscene, whether or not it is obscene.

The Miller Test for Obscenity

Kathy Valente
Kathy joined the IFI team as our Director of Operations in 2008. Previously, Kathy was the state director for Concerned Women for America for 4 years. But even before that,...
Full bio and more from Kathy Valente