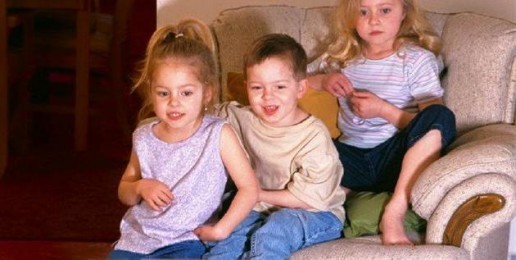 Early onset of sexual activity among teens may relate to the amount of adult content children were exposed to during their childhood, according to a new study released by Children’s Hospital Boston. Based on a longitudinal study tracking children from age six to eighteen, researchers found that the younger children are exposed to content intended for adults in television and movies, the earlier they become sexually active during adolescence. The findings are being presented at the Pediatric Academic Societies meetings on Monday, May 4 in Baltimore.

“Television and movies are among the leading sources of information about sex and relationships for adolescents,” says Hernan Delgado, MD, fellow in the Division of Adolescent/Young Adult Medicine at Children’s Hospital Boston and lead author of the study. “Our research shows that their sexual attitudes and expectations are influenced much earlier in life.”

The study consisted of 754 participants, 365 males and 389 females, who were tracked during two stages in life: first during childhood, and again five years later when their ages ranged from 12 to 18-years-old. At each stage, the television programs and movies viewed, and the amount of time spent watching them over a sample weekday and weekend day were logged. The program titles were used to determine what content was intended for adults. The participants’ onset of sexual activity was then tracked during the second stage.

According to the findings, when the youngest children in the sample–ages 6 to 8-years-old–were exposed to adult-targeted television and movies, they were more likely to have sex earlier when compared those who watched less adult-targeted content. The study found that for every hour the youngest group of children watched adult-targeted content over the two sample days, their chances of having sex during early adolescence increased by 33 percent. Meanwhile, the reverse was not found to be true-that is, becoming sexually active in adolescence did not subsequently increase youth’s viewing of adult-targeted television and movies.

“Adult entertainment often deals with issues and challenges that adults face, including the complexities of sexual relationships. Children have neither the life experience nor the brain development to fully differentiate between a reality they are moving toward and a fiction meant solely to entertain,” addsDavid Bickham, PhD, staff scientist in the Center on Media and Child Health and co-author of the study. “Children learn from media, and when they watch media with sexual references and innuendos, our research suggests they are more likely to engage in sexual activity earlier in life.”

The researchers encourage parents to follow current American Academy of Pediatrics viewing guidelines such as no television in the bedroom, no more than 1 to 2 hours of screen time a day, and to co-view television programs and have an open dialogue about its content with your children. They also suggest that–while the results demonstrate a longitudinal relationship–more research needs be done to understand how media influences children’s growing awareness of human relationships and sexual behavior.

“Adolescent sexual behaviors may be influenced at a younger age, but this is just one area we studied,” adds Dr. Delgado. “We showed how adult media impacts children into adolescence, yet there are a number of other themes in adult television shows and movies, like violence and language, whose influence also needs to be tracked from childhood to adolescence.”

Children’s Hospital Boston is home to the world’s largest research enterprise based at a pediatric medical center, where its discoveries have benefited both children and adults since 1869. More than 500 scientists, including eight members of the National Academy of Sciences, 11 members of the Institute of Medicine and 13 members of the Howard Hughes Medical Institute comprise Children’s research community. Founded as a 20-bed hospital for children, Children’s Hospital Boston today is a 397-bed comprehensive center for pediatric and adolescent health care grounded in the values of excellence in patient care and sensitivity to the complex needs and diversity of children and families. Children’s also is the primary pediatric teaching affiliate of Harvard Medical School. For more information about the hospital and its research visit: www.childrenshospital.org/newsroom.