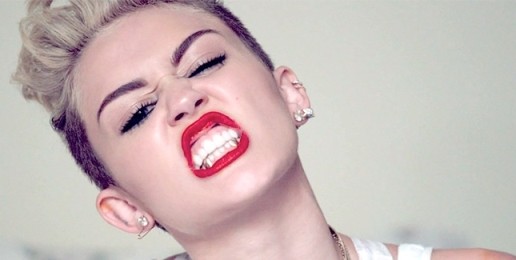 Another Reflection of our National Illness
Written By Micah Clark   |   08.29.13
PRINT

While we could decry the antics of the former child star Hanna Montana on the stage of the Video Music Awards, we really have no one to blame but ourselves.  America is awash in pornography. It is an industry with a larger annual income than the entire NFL Superbowl.  We lift up women as sex objects, teach children that they descended from animals, and enforce that by teaching them to use condoms because we expect them to behave like dogs when hormones kicks in. We even tell them silly stories about “gay penguins” to justify any abnormal sexual impulse they might have otherwise questioned.

Miley Cyrus is the epitome of what we routinely teach young people to be and do for fame and fortune in Hollywood and the music industry, both areas that we constantly worship and look to as a culture.

Why are we shocked when she provides a disgusting display on a TV show before a cheering audience?  Anyone who dares to suggest we return to the moral standards that Americans widely embraced for our first 150 years is pummeled by the patron saints of tolerance.

We applaud pushing the boundaries, then we act surprised when young girls exceed the antics of “stars” like Madonna, Beyonce, and Lady Gaga forgetting that we reap what we sow. We decry sex crimes and child abductions, never making the connection as to how we grow and feed offenders in our culture.

If you would like to read a good analysis of this phenomenon and its impact, particularly on young girls, John Whitehead has a good editorial about this HERE.