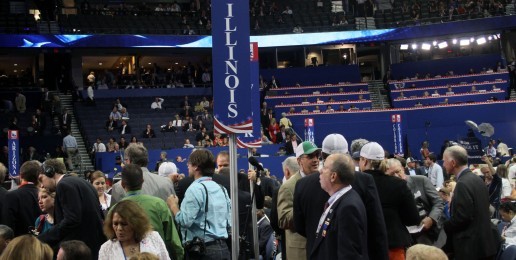 The Republican Illinois delegation has returned from the Republican National Convention.  The Prairie State sent 69 delegates (including ten alternates) to Tampa.

On Thursday, August 30, the delegation heard Massachusetts Gov. Mitt Romney not only formally accept the nomination as the GOP’s presidential nominee, but they also heard him reintroduce his initial plans if elected into office.

“I will begin my presidency with a jobs tour.  President Obama began his presidency with an apology tour.  America, he said, had dictated to other nations.  No, Mr. President, America has freed other nations from dictators,” he said.  As Romney talked about making Obama a one-term president, he concluded:  “When somebody does not do the job, we gotta let ‘em go.”

First time delegate Janice Peterson of Gibson City, Illinois is excited about the next few months leading to the general election.

“I am backing Mitt Romney and Paul Ryan one hundred percent,” said Peterson. “ I think we are going to win by a landslide this November.”

Peterson’s prediction could come true. While a recent poll conducted by Illinois-based pollster and political strategist Michael McKeon found Obama leading Republican Mitt Romney by 49 percent to 37 percent in Cook County, the home of Chicago, Romney has a sizable lead throughout the rest of the state.

Peterson, who said she is a person of Christian faith, acknowledged her involvement with the Tea Party and vowed to unseat President Obama when lawmakers passed the Affordable Care Act.

“The best thing we can do for the nation is left it up by praying to God,” said Peterson. “ I pray 2 Chronicles 7:14 every day. When we return to God this nation will turn around for good.”

Sterling, Illinois resident Kay Ferris also represented the state as a first time delegate. She returned from Tampa full of optimism and great hope for the future.

“We have good leadership in the Party,” said Ferris. “I am especially encouraged to hear our leaders talk about their faith and desire to see religious freedom.”

Like Peterson, Ferris also believes Obama can be defeated on his own turf.

“I was there before he was,” Ferris said enthusiastically. “We have a good grassroots effort going in our state. Many people who voted for him the first time realize they made a mistake. I think it will be harder for him this time.”

Dan Rutherford, former legislator and current Illinois State Treasurer who is also Mitt Romney’s Illinois campaign chair, led the delegation. Rutherford was questioned by some for accepting the sponsorship of a cocktail party paid for by Equality Illinois (EQ), a gay activist group in the state.

Rutherford said he wasn’t certain if the sponsorship would offend conservatives in the delegation. He told the Chicago-Sun Times, “They can go someplace else and drink.”