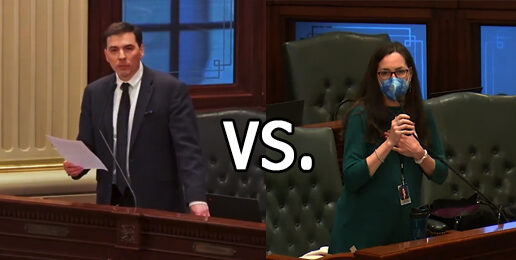 If you ever doubted that we wrestle against spiritual forces of evil who call good evil and evil good, then please watch these two videos of brief statements made on the floor of the Illinois House on Wednesday.

First, watch this video of one of Illinois’ finest lawmakers, the always gracious Tom Morrison (R-Palatine), who civilly expressed his views on the injustice of eradicating public recognition of sex differences, including in women’s private spaces and sports.

Then watch this video of Illinois’ worst lawmaker, the sanctimonious, arrogant, and venomous lesbian Kelly Cassidy (D-Chicago), who, in response to Morrison, hurled indefensible lies at him, refusing even to use his name.

I urge you to watch these videos because how each Illinois House member spoke is almost as important as what they said. But for your convenience, the transcripts of both statements are set forth below, beginning with Morrison’s. Please read it carefully, so you are able to discern whether Cassidy’s response was justifiable:

For these past several weeks, we’ve been hearing facts about women’s history month, and I’m sure that we’ll hear more facts today and this week. When we hear those words, we think about our own mothers, wives, daughters, other notable women throughout history. We objectively know what a woman is, but it’s become increasingly common now to pretend that we don’t know. This is becoming George Orwell’s 1984. It’s Newspeak. It’s gaslighting. It’s activists pounding the table to declare that two plus two equals five. And that does not make it so. Demands that society accept lies as facts in the name of tolerance, inclusion, and justice is anything but. It’s not right, compassionate, or just.

This past weekend, the NCAA allowed a man to become a national champion in women’s swimming. This action was months and years in the making, and it denied that rightful place of honor to actual female athletes, several of whom were denied being named All Americans because their place was taken by University of Pennsylvania swimmer Lia Thomas. Anyone who thinks that fairness in sports competition is the only issue here is missing the point.

Months ago, teammates of Lia Thomas complained to school officials that Thomas had exposed male nudity repeatedly in their locker room. This should have been a clearcut case of indecency and harassment, but university officials ignored the women’s concerns and discomfort. “Listen to women.” In this case, hardly.

Parents in Los Alamitos, California last month sent their fifth-grade girls on a three-day overnight school science field trip. After the weekend concluded, the girls told their parents that three male counselors who identify as non-binary shared those cabin quarters with the girls for each of the nights. Schools in Illinois already have similar policies. And most parents don’t even know, nor will they be told by school officials, less they be accused of discrimination.

In several states, including California, Washington State, and even here in Illinois, hundreds of male inmates, many of whom are serving time for sexual crimes or other crimes of violence are self-declaring as female or non-binary. And they’re getting a transfer to a women’s-only facility. There’s no requirement for surgery, no requirement for hormone therapy. Even if that did make the policy less bad, any sane person realizes how outrageous this is, but the practice continues and is expanding as more individuals realize what they can get away with.

According to a press report, President Joe Biden is now reportedly planning or considering I should say an executive order modeled after the California law, which would allow federal inmates to self-identify their gender and choose between a male or female prison.

Ideas have consequences. It is a minority of vocal activists who continue to push this ideology on all levels of society, including to young school children. It’s an ideology that is at war with reality, and we must stop blindly going along.

We can and should be kind to individuals who suffer from gender dysphoria, but we can do so without completely and irrationally upending society, which is already happening at lightning speed. If we really believe in the protection of women and women’s rights, we must acknowledge the harms being done and bring a stop to this, including the silence and passive acceptance about what’s really going on.

I imagine that here in this body, and perhaps beyond this chamber, there will be some who will try to condemn me and my words, but I’d like to close with these words by columnist Selwyn Duke: “The further a society drifts from the truth, the more it will hate those that speak it.”

Last week, my constituent Elise Malary was pulled out of Lake Michigan. Elise was a shining example of what we want people to do and be in our community. She was part of our community on the North Side. She was dedicated to uplifting the people that she lived and worked with every day. She is one of too many black trans women whose lives mean nothing to the man on the other side of this room. She is one of many transgendered youth who are at increased risk of suicide because of the actions of people like the man that just spoke.

We are watching around the country as right-wing politicians take aim at trans youth and their families picking on the least of these. I’ve watched for years as my colleague has tormented trans youth in his community. And the brave young woman who stood up to that behavior is now my constituent as well. And to every trans youth out there listening,  to every parent who loves and affirms their children as God gave them to them, that’s not happening here in Illinois.

We will not follow in the footsteps of states that are tormenting these families and driving them away. We will embrace our youth. We will protect our youth and we will work together to solve the epidemic of murders and suicides among trans women in our community because we actually love and care for people as God made them. I don’t want to hear any more hate speech on this floor, not from anyone. And if we can only do one thing to honor Elise Malary’s memory, it’s to do that. Hate speech does not belong on this floor, not now, not ever.

For those who don’t know, “Elise” Malary, was a 31-year-old man who identified as a woman. He was not—as Cassidy implied—a “youth.” His age doesn’t make his death less tragic. Rather, his age reveals how misleading and manipulative Cassidy is.

So too do feminists from the other side of the political aisle, including the Women’s Liberation Front, Naomi Wolf, Kara Dansky, the Women’s Declaration International, and J.K. Rowling. In Cassidy’s view, are all these left-leaning feminists—including many lesbians—guilty of hate speech for expressing their belief that sex-based rights exist and that denial of them is unjust? Does defending the sex-based rights of girls and women constitute the tormenting of gender-dysphoric boys in Cassidy’s distorted view?

I have seen and heard a lot of repugnant things spewed by the unscrupulous demagogue Cassidy, but nothing as repugnant as her exploitation of a tragic death to smear of one of Illinois’ finest public servants. In her vitriolic diatribe, she trembled with unrighteous rage as she falsely accuses Morrison of not caring about the death of a “black trans youth.” What is her evidence for this allegation?

What is Cassidy’s evidence that Morrison hates and “torments” trans people? What is her evidence that Morrison (or the millions of men and women who share his beliefs on gender dysphoria) hates those who identify as “trans”? Does Cassidy hate everyone who believes differently than she does on gender, sex, and “sexual orientation”? If so, then she must hate a huge swath of people, including many Catholics, Protestants, Eastern Orthodox, Orthodox Jews, and Muslims.

Is Cassidy aware that many in the medical and mental health communities believe that gender dysphoria and “trans”-identification may be symptoms—like depression and anxiety—of underlying causes, including autism, trauma, abuse, and psychosocial experiences?

Is she aware that hospitals in Sweden and the UK have stopped providing hormonal “treatment” to minors? Are they hateful? Should they be prohibited from speaking? While children and teens with gender dysphoria need compassion and treatment, the disputed question is what kind of treatment is best. Disagreeing with Cassidy on the best path forward does not constitute hatred of gender-dysphoric youth.

Word to Cassidy, Christians think her assumptions about gender, sex, and “sexual orientation” are false and destructive. Many Christians feel uncomfortable and even marginalized by what they view as her hate speech and her attempts to silence dissent. They find her words as intolerant and bigoted as she finds the words of Rep. Morrison.

Republicans who said nothing following Cassidy’s calumny should be ashamed.