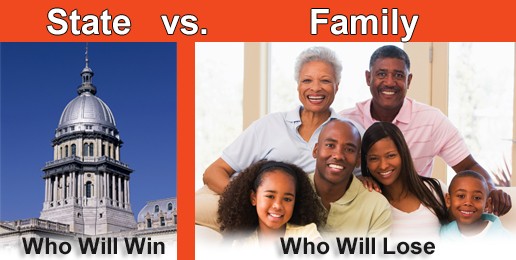 Thirty-four state senators in the Illinois Senate cave in to pressure from the homosexual lobby.

Despite an outpouring of calls, emails and faxes against redefining marriage and family, lawmakers in the Illinois Senate passed SB 10 on Thursday afternoon by a vote of 34 to 21 with 2 voting present.

Five pro-family lawmakers, Senators Tim Bivins (R-Dixon), Dan Duffy (R-Barrington), William Haine (D-Alton), Dale Righter (R-Mattoon), and Kyle McCarter (R-Vandalia), had the courage to challenge this anti-family legislation on the Senate floor during debate while seven Democratic lawmakers  made emotional manipulative appeals for the bill’s passage.  Surprisingly, Senator Jason Barickman (R-Bloomington) was the only Republican to speak in favor of this anti-family legislation.  He then was the only Republican in the Illinois Senate to vote in favor of Gay Marriage.

This bill now moves over to the Illinois House where it is short the votes necessary to pass.

This is why our Defend Marriage Lobby Day on February 20th is so important!  If we hope to defeat this bill in the Illinois House and maintain a sufficient level of opposition to this proposal, we must have a strong showing next week.  Read more about this lobby day HERE.  We need you to show up and send a clear message to state lawmakers in the Illinois House that Illinoisans will NOT allow marriage to be destroyed!  We can stop this!

To see how your state senator voted, click HERE.

Take ACTION:  If you haven’t yet sent an email or a fax to your state lawmakers — it is time to speak up now!  Click HERE to let them know what you think.

Clowns to the Left of Dale Righter in Springfield