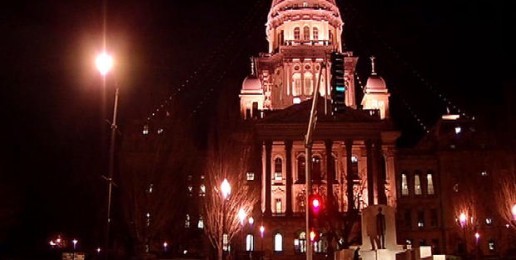 The Illinois House Executive Committee approved a bill to redefine marriage late last night by okaying SB 10. The bill passed out of committee by a 6-5 vote.  It now goes to the full House of Representatives for consideration.

All four Republican lawmakers voted against the bill and were joined by Democrat State Representative Eddie Lee Jackson of East St. Louis.  It is important to note that Democrat State Representative Luis Arroyo (D-Chicago) made a point to qualify his yes vote, saying that he would vote to get the bill out of committee but would not guarantee his support on the House floor, citing his religious faith and the churches in his district as his reasons for not supporting it.  No, this anti-family legislation is not as popular as some would have us believe.  They do not have the votes necessary to pass this bill, and we must continue and even intensify our opposition to this bill.

Those who testified against SB 10 included Dr. Jennifer Roback-Morse, President of the Ruth Institute (a project of the National Organization for Marriage); Kellie M. Fiedorek, Litigation Counsel for Alliance Defending Freedom; Linda Jernigan who lived as a lesbian for nearly twenty years but through the power of Jesus Christ now walks free from the homosexual lifestyle; and Pastor Danny Holliday, from Alton, Illinois.

To watch a video of the entire hearing, please click HERE.

Dr. Roback-Morse began her testimony by asking and answering the questions, “What is marriage,” and “What is owed the child”:

I urge you to reject the bill before you, SB 10. I urge you to reject any other legislation that would redefine the most basic structural feature of marriage, by removing the dual gender requirement for marriage. Redefining marriage redefines parenthood. “Marriage equality” cannot be achieved. Making same sex couples the legal equivalent of opposite sex couples will introduce new and deeper inequalities into society.

Most importantly, redefining marriage creates structural injustices against children. To see this, we must ask ourselves: what is the essential public purpose of marriage, and what is owed to the child?

The essential public purpose of marriage is to attach mothers and fathers to their children and to one another. And the child is entitled to a relationship with and care from both of the people who brought him into being. Therefore, the child has a legitimate interest in the stability of his parents’ union. But no child can defend these entitlements himself. Nor is it adequate to make restitution after these rights have been violated. The child’s rights must be supported pro-actively, before harm is done.

Marriage is adult society’s institutional structure for protecting these legitimate interests of children. Without this public purpose, we would not need marriage at all as a distinct social institution.

Same sex couples and opposite sex couples are obviously different with respect to this essential public purpose of marriage. And treating different things differently is not discrimination. That is why, in the few cases where courts have found opposite sex marriage to be unlawful discrimination, they have had to come up with purposes for marriage that have nothing to do with procreation or attaching children to parents.

Thus, my first and most basic point is this: It is a structural injustice to a child, to deprive him or her of a relationship with both parents, without some compelling or unavoidable reason.

It may sound odd but, even though this passed out of committee, I am encouraged by the progress we are making in Springfield .  At the same time, we cannot let down our guard for a moment.  This is still an “all hands on deck” situation, and only with your help will we be able to stop this bill from being passed!

Take ACTION:  If you haven’t yet sent an email or a fax to your state representative — it is time to speak up now!  Click HERE to contact your Illinois Representative and tell him/her to oppose the effort to redefine marriage!.  You can also call him/her through the Capitol switchboard at (217) 782-2000.

Better still, schedule a meeting with your representative, bring as many constituents as you can, and ask him or her the questions available HERE.

You can also help us continue the fight for natural marriage by donating $10, $25, $50 or $100 or more today. With your support we can continue our vital work!  Click HERE to support the work and ministry of Illinois Family Institute.