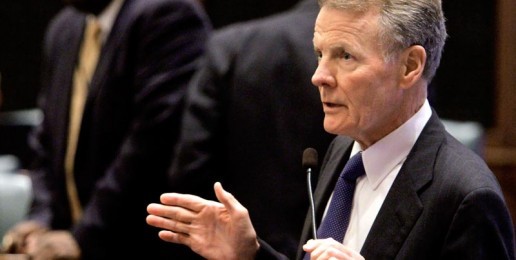 Voters in 30 states have been able to cast ballots to pass state constitutional amendments to protect marriage as between a man and a woman. The results have been overwhelming in defense of natural marriage, despite the fact that pro-family voters were vastly outspent by pro-homosexual activists. Clearly, Americans from Florida to Idaho, Arizona to Virginia want to take steps to permanently prevent marriage from being redefined.

Unfortunately, Illinois voters have not been given this opportunity because of one man. For the past three General Assembly sessions (6 years), a constitutional amendment to define marriage as one man and one woman has been introduced. And each year, Speaker Michael Madigan (D-Chicago) has refused to move it to a committee to be debated and voted on. If this amendment were to come before the entire General Assembly, we are confident that it would receive the two-thirds vote needed to pass. And once passed by the General Assembly, it would be placed on a ballot referendum in the next state wide election for Illinois voters to decide.

Take ACTION: In response to Madigan’s inaction, IFI and other pro-marriage advocates are planning to protest in front of his district office on the south side of Chicago. Please join us in sending a strong message to Speaker Madigan — and please, bring your own respectful home-made signs.

If you are not able to join us for this protest, please click HERE to send an email or fax message to Speaker Madigan asking him to “let the people vote” on the issue of marriage.

The attempts to erode our freedoms, our families and our faith continue relentlessly, aided and abetted by out-of-control government, activists courts, and the dominant liberal media. Gay activists in Illinois are pushing hard for same-sex “marriage” under the name “civil unions.” The attack on traditional Judeo-Christian values continues to grow more strident and more radical every year.

We cannot cower in fear of tyrants who threaten to destroy this great country! Instead, as William F. Buckley said, “the best defense against usurpatory government is an assertive citizenry.”

Please join us in asserting our God-given rights as American citizens to take back the government from the few who would wrest it away from us, or impose their ideology unfairly.

Thoughts on the Minnesota Marriage Amendment
b
a
x
r