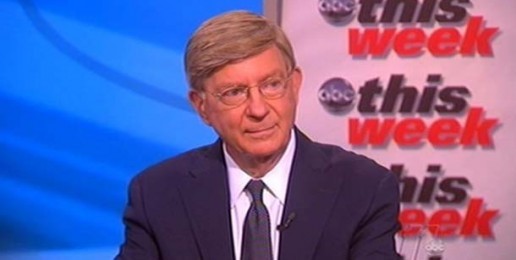 What Journalists Should Ask Liberals and “Enlightened” Conservatives About Marriage
Written By Laurie Higgins   |   12.10.12
PRINT

Sunday was a depressing news day. Here’s what purported “conservatives” George Will, Mary Matalin, and Matthew Dowd had to say about same-sex marriage:

George Will: “This decision by the Supreme Court came 31 days after an Election Day in which three states for the first time endorsed same-sex marriage at the ballot box — never happened before — Maine, Maryland, and the state of Washington….they could say it’s now safe to look at this because there is something like an emerging consensus. Quite literally, the opposition to gay marriage is dying. It’s old people….marriage law is traditionally the prerogative of the states, but let’s put a human face on this. One of the two cases concerns a New York woman who married in Canada her female partner. They lived together 44 years. The partner dies. As because the partner wasn’t a man, the woman is hit with a $363,000 tax bill from the federal government. There are a thousand or more federal laws or programs that are at stake here. And the more the welfare state envelops us in regulations and benefits, the more the equal protection argument weighs in, and maybe decisively.”

Matalin: “[The fact that increasing numbers of Americans are supporting same-sex marriage demonstrates that] Americans have common sense. There are important constitutional, biological, theological, ontological questions relative to homosexual marriage, but people who live in the real world say the greatest threat to civil order is heterosexuals who don’t get married and are making babies. That’s an epidemic in crisis proportions. That is irrefutably more problematic for our culture than homosexuals getting married. So I find this an important dancing on the head of a pin argument.”

Dowd: “To me, this — the consensus has already emerged on this issue. It’s just a question of who’s going to — is the Supreme Court going to catch up and follow that wind of the pack…or get ahead of it or put a block in the path of it. I mean, if you take a look at this, there is still a division in this country over this issue, but there is no division in this country among people under 35 or 30 years old on this issue. There is no division. Now, I have a perfect example. My son went in the Army…..10 years before, they’d ask everybody to raise that hands, 300 guys raise their hand, who’s for gay — who’s for gays in the military? Eighty percent of the troops said we’re opposed to gays in the military. When he got in, five or six years later, 80 percent said they were for gays in the military. It had changed that much and that quick. To me, we still — you still have to know there’s a huge group of folks in this country that believe this issue is not ready to be settled nationally, and they’re over 35, they go to church regularly, they still view marriage as traditional and all that, but in the end, this issue, five years from now is even going to be more settled, 10 years from now is going to be more settled.

To George Will: Why would our youth oppose the legalization of “same-sex marriage” when they’ve never been exposed to the substantive reasons to do so?

To Mary Matalin: She has implicitly posited a false dichotomy between opposing out of wedlock births and opposing “same-sex marriage.” One can and should do both. Matalin reveals her own ignorance if she really believes discussions of the legalization of “same-sex marriage” constitute airy debates on inconsequential philosophical minutia.

To Matthew Dowd: The fact that ten years ago 240 out of 3oo young soldiers opposed homosexuals serving in the military, while now only 60 out of 300 oppose homosexuals serving in the military may have something to do with the demagogic propaganda about homosexuality to which they’ve been exposed in their schools and entertainment industry virtually from birth. Dowd is right: the culture will devolve further into moral and intellectual ignorance if academia continues to expose students only to the work of Leftists; if churches refuse to find ways to help Christians recognize the fallacious arguments used to normalize homosexuality; and if Hollywood continues to manipulate the emotions of Americans, particularly our vulnerable youth.

In case no one has noticed, journalists never ask Democrats the hard questions regarding homosexuality—and I mean never.  Perhaps our news show hosts should ask their guests and panelists these questions:

If any journalists have the integrity to ask these hard questions, they shouldn’t let our mollycoddled liberals off the hook when they respond with ignorant, evasive non-answers.

It would also be refreshing if our talk shows would invite Princeton University Law Professor Robert George to discuss the issue of marriage with “conservatives” like George Will, Mary Matalin, and Matthew Dowd—or would that be considered “bullying”?