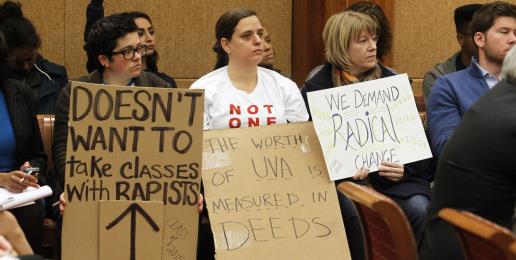 Rolling Stone has apologized for Erdely’s failure to adequately fact-check a University of Virginia co-ed’s allegations of a brutal gang-rape that she claimed took place at a fraternity. Erdely’s article titled “A Rape on Campus” led to an investigation, campus protests, suspension of all fraternities, and public vilification and vandalism of the fraternity where the alleged crimes took place. The entire mess resulted from Erdely’s failure to interview any of the alleged perpetrators before publishing her essay–an essay that comports so perfectly with “progressive” notions about oppressive white men and privilege.

It appears that almost every detail in the accuser’s story is false, and now even the accuser’s friends, who according to the Washington Post are “sexual assault awareness advocates,” doubt her story.

“I reached out to [the accused] in multiple ways,” Erdely said [in a Slate Magazine interview], “They were kind of hard to get in touch with because [the fraternity’s] contact page was pretty outdated. But I wound up speaking…I wound up getting in touch with their local president, who sent me an e-mail, and then I talked with their sort of, their national guy, who’s kind of their national crisis manager. They were both helpful in their own way, I guess.”

However, he said, “we verified their existence,” in part by talking to [the accuser’s] friends. “I’m satisfied that these guys exist and are real. We knew who they were.”

Once again, liberals, always eager to rush to judgment on events related to their favorite ideological causes, have harmed real people.

When asked hard questions by the Washington Post about her investigation, Erdely whined that “’I could address many of [the questions] individually . . . but by dwelling on this, you’re getting sidetracked.’” Yes, let’s not get sidetracked by facts or evidence. They tend to get in the way of ideology.

In 2012, I wrote a two-part criticism (here and here) of another troubling Rolling Stone article written by Erdely titled “One Town’s War on Gay Teens”  in which she accuses “evangelicals” of being the cause of the bullying and suicide of nine teens (presumably the “gay teens” referenced in the title) in the Anoka-Hennepin school district in Minnesota. She took particular aim at a conservative parent group that was fighting to establish a curricula-neutrality policy that would prevent teachers from using their classrooms to promote Leftist assumptions about homosexuality. But just like Erdely’s most recent journalistic debacle, her claims in the 2012 article suffer from a remarkable lack of evidence and misrepresentation of facts.

Here are just a few of the problems with her flawed and destructive 2012 story:

2.) Though Erdely suggested that “Christian activists” were responsible for the suicides, she didn’t produce one piece of evidence that the school bullies were Evangelicals or motivated by Evangelical beliefs about homosexuality.

3.) Not once did Erdely provide evidence that the curricula-neutrality policy caused the bullying of the one homosexual student or the three who were called anti-“gay” epithets.

4.) Erdely did not tell her readers that one of the students she included in the nine, TJ Hayes, was enrolled in a “progressive” charter school that was not covered by any of the school policies on which Erdely blames the suicides.

5.) Erdely did not mention that another of the students she included in the nine, Kevin Buchman, was not enrolled in any Anoka-Hennepin high school. He was, in fact, a student at the University of Minnesota. Kevin, a bright, good-looking, popular athlete, had graduated from an Anoka-Hennepin high school 8 1/2 months before his suicide. He committed suicide during the second semester of his freshman year at the University of Minnesota. His family wrote this about Kevin’s suicide.

A situation happened his first year of college, that caused Kevin to question his character. He began a spiral downward into the dark cave of suicidal depression. He treated with a doctor [sic], was on medication, and seemed to be doing better. He kept his despair hidden and ended his life.

6.) Erdely wrote that the mother of one of the students who committed suicide “acknowledges that her daughter….likely had many issues that combined to push her over the edge, but feels strongly that bullying was one of those factors.”  This mother’s “feeling” that bullying was one of multiple contributing factors to her daughter’s suicide led Erdely to conclude with utter certitude that the school’s curricula- neutrality policy and Evangelicals were the ultimate cause. Erdely never explained precisely how the neutrality policy or Evangelicals were the ultimate cause.

7.) Erdely cited 10th-grader Sam Pinilla who said he was pushed to the ground and called “faggot” while a teacher stood nearby and did nothing. Erdely also described a 10th-grade girl who said she was called a “‘lesbo’” and “‘sinner” within “earshot of teachers” and that when she reported the incident to an associate principal, he told her to “lay low.” Did Erdely verify those incidents? Did she track down the teacher or teachers who supposedly heard and did nothing? And again how did Erdely connect curricula-neutrality policy to the teachers’ purported failure to properly enforce existing anti-bullying policy?

8.) Did Erdely talk to the bullies? Did Erdely look into the beliefs and backgrounds of any of the purported bullies? Did she ask if they were Evangelicals? Did she inquire into the motives for their bullying? Had the bullies come from dysfunctional families or single parent homes? Had they experienced violence in their homes? Did they have academic problems or psychological disorders? Had they watched a lot of violent television or played violent video games?

9.) Did she talk to any teens who had deeply held Evangelical beliefs to find out what their thoughts were about homosexuality and bullying?

10.) If Erdely were really concerned about preventing suicides, why did she spend virtually no time exploring all the factors that experts identify as contributing to suicidal ideation, like mental illness, family dysfunction and divorce, family financial problems, and substance abuse?

11.)  Did Erdely talk to any conservative teachers to ask if they thought that either the neutrality policy or Evangelicalism caused bullying? If so, how? If not, what do they think causes bullying? Did she ask them if they have ignored bullying?

Erdely has a nasty professional habit of promoting ugly accusations without interviewing those accused and of making claims for which she fails to provide evidence. She evidently has no regard for the damage that follows in her reckless rhetorical wake. Erdely’s newest piece of shoddy journalism will make it even more difficult for victims of campus sexual assaults to be believed.