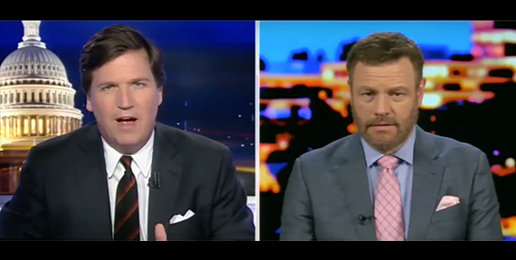 Several days ago, I took Tucker Carlson—a self-identifying Christian—to my teeny tiny virtual woodshed for congratulating homosexual Democratic strategist Richard Goodstein on his God-mocking, soul-destroying pseudo-marriage. Well, now I’m offering Carlson a hearty virtual pat on the back for Thursday night’s segment with Mark Steyn to whom I offer a bone-rattling pat on the back. Here’s an excerpt from their discussion of the loathsome Leftist tactic to oppress dissenters through control of language:

Steyn: “We have this immense cleansing of language. And [Leftists] are playing for big game here. I noticed about a decade ago, the government of Spain removed the words “mother” and “father” from its birth certificates and replaced them with “progenitor A” and “progenitor B”…. The fact is the abolition of “mother” and “father” is actually quite a big thing. And the Left is clever about this. They play for big prizes. One of the reasons I despair about the political Right is because we get all ‘Oohhh yeah, we’re trying to get a cut in capital gains tax through Congress!’ Meanwhile [Leftists] are abolishing the sexes. They’re ABOLISHING THE SEXES! That’s incredible!”

Carlson: “They’re re-ordering the natural order…. And the rest of us are either still playing these dumb low-stakes grievance politics… or arguing… the capital gains rate as if that really matters, because it doesn’t. Meanwhile no one’s getting married. The kids are all born out of wedlock. And  society collapses.”

Steyn: “One of the problems is… the Right gets head-faked into playing on the Left’s terms, in part because the Left changes the meaning of all the words, so you end up saying the same nonsense as the Left. People now can have their careers ruined because they ‘misgender’ someone on Twitter. We shouldn’t concede these things lightly…. This is actually industrial scale Orwellianism where you’re precisely inverting the meaning of language… so that people can’t even discuss certain topics anymore.”

Carlson: “When we give up these battles over words, we give up autonomy.”

I have long argued that there is no greater threat to our First Amendment protections than that posed by “LGBTQQAP” fascists. I have specifically said—and taken flak from RINOs for doing so—that the reductively called social issues are far more important than tax rates. And I have said countless times that under no circumstances should conservatives capitulate to language diktats. Do not ever mis-sex cross-sex masqueraders. Do not ever use pronouns that don’t match biological sex.

I would quibble with Steyn on one word. He said, “we shouldn’t concede these things lightly.” I would argue that we shouldn’t concede these things—period. It is neither loving nor “woke” to concede to the language edicts of the science-denying “trans” cult. (Pssst, come closer—you may also say “tr*nny,” just not on Facebook or the FB Overlords will come in the dark of night and throw you in the slammer.)