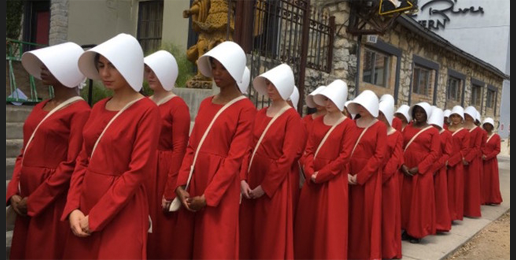 The series The Handmaid’s Tale based on the novel of the same title by Margaret Atwood just premiered on Hulu and is generating a flurry of excitement from ever-excitable “progressives.” It depicts a dystopian world in which Christians have established a totalitarian theocracy where fertile women are conscripted into producing children for infertile members of society’s elites. Paranoid “progressives” are calling this series “timely.”

Yes, today, as Christians face greater oppression than they have ever faced in the history of this country, “progressives” believe the country is a risk of becoming a conservative Christian theocracy.  Well, here’s a tale to tell your children.

The True Handmaid’s Tale: The Story of Ba’albeck

A dystopian world, the seeds of which were sown in the 20th Century, reached its apex–or perhaps nadir–in the mid-21st Century when an oppressive and intrinsically sterile ruling class recruited impoverished women to become their breeders. At great risk, these disadvantaged women bore children for elite, sterile homosexual couples.

Procreation had been long been severed from intimate, committed, lifelong comprehensive unions, so the final step of severing it from sex was easy.

In this dark period of history, procreation resulted from impersonal, sexless technologically induced fertilization aided by poorly compensated human incubators. Children became commodities who never knew their mothers. Laws were passed prohibiting citizens from even talking about the right of children to know and be raised by their mother and father.

The country had transmogrified from a constitutional republic to a totalitarian state that was shaped by an ancient gnostic and pagan sexual ideology. That which gives order and meaning to sexuality, which is to say religion, had been banned outside of “homes, hearts, and pews.” America had become the cultic ideocracy known as Ba’albeck.

To perpetuate this cultic ideocracy, the freedom of Christians had to be curtailed. They lost their businesses. They were prohibited from teaching in public schools or producing art. Their private schools and colleges were shut down. And then they lost their right to speak freely.

Ba’albeckians–long enthralled by 20th Century dystopian literature–imposed Newspeak on citizens in order to control not merely language but thought itself. The words “mother” and “father” were replaced with Parent “A” and Parent “B.” If “mother” and “father” were used, they were severed from any reference to biological femaleness or maleness. So, the sycophantic press wrote stories about men who were mothers.

All other references to biological sex were eradicated by year 2050. Within one generation, “he,” “she,” “him,” and “her” were relics of an obsolete gendered past, replaced by the gender-free “ze,” “zim,” and “zir.”

Though attacks on gendered language began with the “trans”-gressive movement, homoppressors soon saw the utility of eradicating public recognition of sex differences, and so laws were passed banning the use of all gendered language. Initially, violators were fined. When such penalties proved ineffective, violators were jailed and then disappeared.

As homoppressors and their “trans”-allies began their assault on sexual boundaries by capturing virtually every major cultural institution–including the arts, media, government, education, and health–a resistance emerged but with insufficient numbers to withstand the power and reach of the sexual revolutionaries. For a time, many thought the true remnant was crushed…