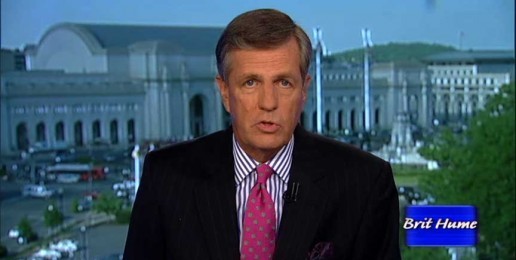 During the Roman Empires secularist era those who acknowledged the deity of Christ were frequently fed to the lions to entertain for lack of a better word the progressive elites of the day. Theres little doubt that if many of todays secular-progressives (more accurately: moonbat liberals) had their way, Caesar Obama would call out the lions once again.

Nothing makes the left lose its collective noodle like an open proclamation of Christian faith. You don’t see it when Muslims proselytize in government schools; the ACLU doesn’t sue when Wiccans share their witchy ways; militant gay activists don’t picket Buddhist temples with bullhorns while inhabitants grasp at Zen. No, theres something about Christianity that just drives em nuts. Always has. Always will.

Case in point: Recently, on two separate occasions, Fox News veteran Brit Hume both publicly pronounced his own faith in Jesus Christ and boldly suggested that Tiger Woods might find forgiveness and redemption for his serial philandering should he turn to the Christian faith.

Hume first offered Tiger the advice on Fox News Sunday and then reiterated his sage, though decidedly non-PC council on The OReilly Factor the following night. When asked by host Bill O’Reilly what kind of response he’d received for his comments, Hume replied, in part: Its always been a puzzling thing to me. The Bible even speaks of it. You speak the name Jesus Christ and all hell breaks loose.

After Hume made his comments, and as if on cue (Lord forgive them for not knowing what they do or why they do it) liberals went apoplectic. Heres a small sampling:

As reported by CNSNews.com: Tom Shales, media critic for the Washington Post, in a Tuesday column, demanded that Hume apologize and called his Christian remarks even only a few days into January, as one of the most ridiculous of the year.

MSNBCs reliably raspy Keith Olbermann accused Hume of attempting to threaten Tiger Woods into converting to Christianity and demanded that his Fox News ratings superior keep religious advocacy out of public life (back in the closet, Brit old boy).

Olblubberman then compared Hume to a terrorist, suggesting that the worst example of this kind of proselytizing are jihadists. Finally, he betrayed the lefts typical anti-Christian bigotry, suggesting that Jesus may have been a homosexual and wondering aloud: WWJDIHS: What would Jesus do if hes straight?

While the mainstream media’s rage was clumsily managed (or masked), unbridled hate boiled over in the left-wing blogosphere.

On the sexual anarchist site, JoeMyGod, poster QScribe suggested that Brit Humes deceased son had been gay and viciously accused Hume of being responsible for the young mans suicide: Brit Hume still hasn’t repented for trashing his gay son and driving him to suicide. When I want moral guidance from a pig like that, I’ll be sure to ask. Until then, he really ought to STFU. (Hume has publicly shared that his sons heartbreaking suicide played a large role in his acceptance of Christ.)

The next commenter went so far as to cruelly imply that Hume had sexually molested his own child and further mocked the tragic suicide, writing: Dead victims don’t tell on their molesters.

Commenting on the Huffington Post, Kandaher bypassed Hume altogether and aimed his vitriol directly at his Creator: anyone (sic) watched The passion of Christ? I thoruhgly (sic) enjoyed it. Nothing like watching this bloke getting beaten up! He deserved what he got and more!

You get the idea.

Now, in the interest of full disclosure, I must confess that I very much enjoy watching liberals go goofy when the light of truth pierces that shadowy void called moral relativism. When the lefts religion of choice secular-humanism is challenged through exposure to the gospel message, they almost universally and instinctively react with such visceral, knee-jerk spasms. You can set your clock to it.

But believe it or not, there’s actually something rather delightful about such hateful lashing about. These poor souls to be pitied and prayed for fail to realize that, manifest within their own unwittingly bizarre behavior, is certain affirmation of the very words of Christ on the subject.

Jesus addressed this peculiar and deeply spiritual phenomenon on more than one occasion over two thousand years ago. In John 15:18-20 (NIV), for instance, He reminds His followers: If the world hates you, keep in mind that it hated me first. If you belonged to the world, it would love you as its own. As it is, you do not belong to the world, but I have chosen you out of the world. That is why the world hates you.

Now, I’m real sorry that most progressives and other non-believers feel that Christianity is deficiently tolerant or inclusive of various man-made religions and lifestyle choices. But it’s just not our call. Christ Himself reveals over and again that the pathway to heaven is a very narrow one, requiring membership in a rather exclusive club– a club wherein belief in Him and repentance from sin are the only membership requirements.

But lest you have any doubt, consider John 3:36, which warns every man, woman and child on earth past, present and future: “Whoever believes in the Son [Jesus] has eternal life, but whoever rejects the Son will not see life, for Gods wrath remains on him.”

So, Brit Hume had it right, didn’t he? I mean, it is kind of an all or nothing proposition, isn’t it?

As my favorite author and Christian apologist C.S. Lewis famously pointed out in his blockbuster book Mere Christianity, Christ could only have been one of three things: A lunatic, a liar, or, as Jesus oft claimed and as billions have believed, the sovereign Lord and Creator of the universe.

A man who was merely a man and said the sort of things Jesus said would not be a great moral teacher. He would either be a lunatic on a level with the man who says he is a poached egg or else he would be the Devil of Hell. You must make your choice. Either this man was, and is, the Son of God; or else a madman or something worse. You can shut Him up for a fool, you can spit at Him and kill him as a demon; or you can fall at His feet and call Him Lord and God. But let us not come with any patronizing nonsense about His being a great human teacher. He has not left that open to us. He did not intend to. –C.S. Lewis

So, what does this all mean? Well, and please take this in the spirit (little ‘s’ intended): Brit Hume’s woolly, wily, wandering critics really ought to just un-knot their knickers; mudra, mantra or something; and seriously reflect upon the man’s words and heart.

Perhaps they should (being all tolerant, diverse and whatnot) consider, if only for a moment, the very Spirit (big ‘S’) from which came those words and were formed that heart.

In the meantime, to Mr. Hume: Well done, good and faithful servant.