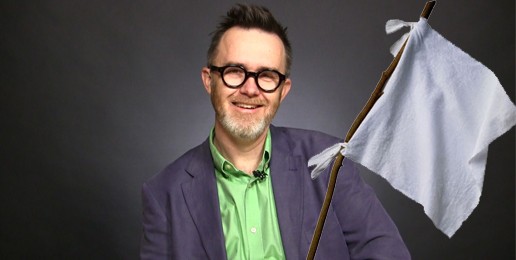 Senior editor of The American Conservative, Rod Dreher, opposes Kentucky County Clerk Kim Davis’ act of civil disobedience. As most adults know—with the possible exception of those interviewed on Watters’ World—Kim Davis is refusing to issue marriage licenses with her signature to couples whose unions are inherently non-marital. After being denied even the teeny tiniest religious accommodation, Davis was thrown in the brig, which is a penalty that liberal government officials who have engaged in far more egregious acts of civil disobedience have not suffered.

In his post, Dreher predicts this parade of hypothetical horribles will result from Kim Davis’ action:

1.) Gay marriage will still be the law of the land.

2.) A huge number of secular and/or liberal people in this country will be far less disposed to listen to anybody talk about religious liberty, and will be more willing to regard all religious liberty claims as Kim Davis-like special pleading.

3.) A non-trivial number of conservatives will lose patience with and sympathy for religious conservatives, because whatever they think about same-sex marriage, they will see this as fundamentally a law-and-order issue.

4.)A huge number of conservative Christians will become ever more alienated from America and angry at the government. This will hasten their exodus from the public square, and the fraying of the social fabric.

Well, Dreher is not arguing that horrible #1 will be a result of her action. Rather, he’s suggesting that since “gay marriage” will still be the law of the land, Davis’ act of civil disobedience is an exercise in futility.

Ending “gay marriage,” however, is not her goal. Clearly she, like many Americans, desires that “gay marriage” not be legal, but that isn’t her goal. Her goal in refusing to issue marriage licenses to those in non-marital unions is simply to have her name removed so that there is not even an appearance of complicity in the absurd and offensive act of recognizing same-sex unions as marriages. It remains to be seen whether she will succeed in achieving that goal.

But with regard to Dreher’s somewhat irrelevant point on the inefficacy of one act of civil disobedience: Did anyone think that Rosa Parks’ refusal to move to the back of the bus would in one fell swoop change Jim Crow laws (and no, I’m not equating the injustice Kim Davis faces with the injustice Rosa Parks faced)? Does the failure of one act of civil disobedience to change laws undermine its value?

With regard to horrible #4: Perhaps a huge number of conservative Christians will become ever more alienated from America and angry at the government, but blaming that on Kim Davis is a bit like heaping blame on the proverbial canary in the coal mine. Kim Davis’ civil disobedience has alerted conservative Christians to the reality that the cultural air we breathe is noxious. Her action has exposed the alienating actions and hostility of those in and out of government who are hell-bent on subordinating First Amendment protections to the pagan sexual revolution that, like the “corpse flower,” is coming into full fetid bloom.

While we’re speculating about the effects of Kim Davis’ civil disobedience, I would like to posit my parade of hypothetical lovelies—or would it be terrifics?

Anyway, here they are:

1.) Her action may spur conservatives of all stripes to read and think more deeply about the separation of church and state, a concept that secularists and/or liberals have successfully perverted almost beyond recognition, persuading people of faith that it is constitutionally impermissible for religious belief to inform political decisions.

2.) Her action may increase the number of people concerned about the usurpation of the rights of citizens to govern themselves.

3.) Her action may motivate citizens to think about the principles that justify civil disobedience.

4.) Her action may lead Christians to think more deeply about what should be rendered unto Caesar and what price they’re willing to pay for holding fast to truth.

5.) Her action may help illuminate the erosion of First Amendment rights that jackbooted “LGBTQQIAP” activists are seeking in their quest to limit the exercise of religion to hearts, homes, and pews

Such a parade of terrifics would be a lovely antidote to both pessimistic parades of horribles and rainbow shame parades.

Things are, indeed, shaky for religious liberty–for orthodox Christians–in America, but not because of Kim Davis. Things are shaky because of “LGBTQQIAP” activists, their ideological allies, and the complacency and cowardice of the church.