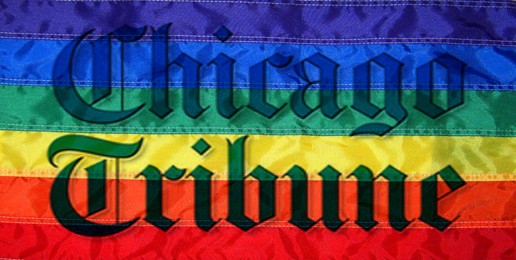 Truthiness:
the quality of preferring concepts or facts one wishes to be true, rather than concepts or facts known to be true;
a quality characterizing a ‘truth’ that a person making an argument or assertion claims to know intuitively ‘from the gut’
or because it ‘feels right’ without regard to evidence, logic, intellectual examination, or facts.

A disgraceful column in the Chicago Tribune by the often disingenuous Eric Zorn serves as a reminder of how essential dishonesty is in the ultimately tragic effort to normalize homosexuality.

Zorn censoriously castigates Christians who seek to honor God in all that they do, including their work, describing them as “censorious photographers….sour and judgmental looking with revulsion” at homosexual “wedding” partners, and “saying bitterly to the guests ‘Smile, somehow.’” He further censoriously imagines a “reproachful caterer, slamming dishes down to express her contempt” and “an opprobrious deejay or sanctimonious florist grumbling darkly throughout the festivities.”

While glibly imagining these ugly and implausible scenarios, Zorn admits to a complete inability to “imagine that the fuss about gay weddings and their potential to impinge on religious freedom of service providers is a real-life problem.”

While providing not a single case in which a sour and judgmental Christian photographer looked with revulsion at homosexual “wedding” partners, or a reproachful caterer contemptuously slammed dishes, or a deejay or florist grumbled darkly during a reception, he did provide a case in which an actual Christian photographer was sued and fined for her demurral from photographing a lesbian commitment ceremony. And then there are the bakers and florist who are being sued. Oh, and let’s not forget about the fertility specialists who were sued for refusing to inseminate a lesbian, and the bed and breakfast owners who have been sued for not renting their facilities to homosexual couples.

Zorn’s solution to the problem of the loss of religious liberty is to endorse yet another of obscene sex columnist Dan Savage’s harebrained schemes. Savage, the homosexual activist who describes orthodox Christians as “bat sh**, a**h***le, do***ebags,” has proposed establishing a database of “gay-hostile wedding service providers” whom Zorn describes as embodying a “we don’t serve your kind here” sentiment.

By now the lies of Zorn should be obvious: First, he posits hypothetical scenarios involving imaginary Christians for which he apparently has no evidence. Then he implies that actual Christians refuse to serve homosexuals when he likely knows—or should know—that the photographers, bakers, florists, and fertility specialists do provide their products and services to homosexuals, unless the particular service being requested violates their religious beliefs. In other words, Zorn lies when he suggests that Christians “don’t serve” homosexuals.

Contrast Zorn’s and other “progressives’” lies and ugly ad hominem attacks with Baronelle Stutzman’s response to this debate. She is the Washington florist who declined to provide floral arrangements for the same-sex “wedding” of a homosexual client whom she had served for nine years knowing full well that he was homosexual.

Please watch this moving video and send it to friends (click here).

Zorn rightly presumes that Christians who believe that both the Old and New Testaments condemn homosexual acts (while imploring all sinners to repent and “put on the new self, created after the likeness of God in true righteousness and holiness”) will not sign on to such a dubious database. There are countless numbers of Christians who trust the scores of theologians trained in exegesis, including contemporary theologians, who teach that Scripture does indeed condemn homosexual acts. These Christians also believe that Scripture offers those who experience same-sex attraction the same freedom from bondage to sin (which is different from absence of sinful desires) that is offered to sinners who experience other sin predispositions. These Christians would not sign on to such a database.

And why not? (I’ll answer this question as if Savage and Zorn were serious and not merely snotty in their proposal.)

First, orthodox Christians wouldn’t sign on to such a database, because they’re not “gay-hostile.” They don’t hate those who experience homoerotic attraction and affirm a homosexual identity.

Second, they wouldn’t sign on, because those on the Left whose mission is to eradicate conservative moral beliefs will stoop to lies and slander to achieve their pernicious goal.

Without a shred of evidence, “progressives” continually assert the following non-facty, truthies:

Americans’ acceptance of President Obama’s lies reveals how dangerously comfortable we have become with dishonesty. It will take a profound renovation of our culture to restore truthfulness to its proper place and establish political freedom on a more secure foundation. How did American culture grow so dangerously accustomed to falsehood?

In order to know whether an idea embodies love, one must first know if it’s true. The idea that volitional homosexual acts are morally neutral or morally good is not true and, therefore, promoting it is not loving. Promoting such an idea to young children—as is happening in our publicly subsidized schools—is downright evil.