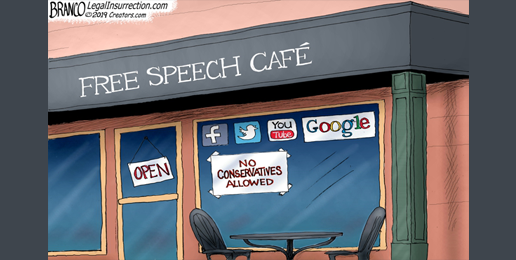 Censorship today looks like my three-day stint in the Facebook pokey over Thanksgiving weekend during which my mad keyboarding fingers were (almost) crushed in tiny Facebook thumbscrews engraved with a photo of Lord Zuckerberg. The reason for my imprisonment by Facebook Overlords in one of their many Cells of Iniquity beggars belief.

It all started when I posted about the image Facebook created to advertise their new avatars. As you can see, this image doesn’t include any white male avatars.

I totally get why there are no white, male avatars here. White males are so creepy. In all my old family photos, I’m colorizing my grandpas, dad, husband, brother, uncle, cousins, son, sons-in-law, grandsons, and nephews.

No, that’s not what sent the Overlords to their fainting couches.

In response to the Animal Farm allusion, I replied sarcastically, “That reminds me, white males are pigs too.”

That was what got me thrown in the clink.

Ironically, by using irony to criticize Facebook’s exclusionary avatar image and the hatred of white males by “progressives,” I was punished for allegedly violating Facebook’s Ministry of Truth standards on hate speech. The Overlords definitely don’t get sarcasm.

I hope everyone sees the danger illustrated in this one Facebook jail sentence—the danger in the brave new world that Big Brother Biden, zillionaire Zuckerberg, and the “progressive” plutocrats who control America hope to create. In that new world, nameless, faceless algorithms that are unable to recognize sarcasm or satire will censor books and cancel articles, posts, and speakers that deviate from the leftist beliefs of their creators.

To make such imprisonments—which are very bad PR for tyrants—less necessary, leftists have taken a few pages from Red China and added “struggle sessions” to their indoctrinating toolbox in which, for example, non-racist whites are humiliated into confessing they’re racists.

Those intransigent few who refuse to capitulate to leftist dogma and diktats will be publicly named and shamed for their allegedly dangerous, unwoke ideas. Currently, those ideas pertain to race and sexuality, but there is no reason to expect the boundaries of banned ideas won’t expand.

First a little necessary history before the surprising news.

“Struggle sessions” were a tactical tool the Chinese Communist Party used during the Communist Revolution to secure compliance from those deemed opponents of Chairman Mao. An article in the Atlantic describes these precursors to today’s ubiquitous naming and shaming sessions:

In such sessions, everyone from politicians to teachers would be dragged before a large audience and forced to humiliate themselves with withering self-criticism, denunciations of their friends and allies, and pleas for forgiveness.

Sounds remarkably like what Critical Race Theorists, diversity trainers, and BLM activists are doing all over the country in schools, corporations, and our increasingly lawless streets.

To relate abstract ideologies to the lived experiences of ordinary people is the great task of all revolutionaries. How do we then explain the Chinese Communist Party’s (CCP) remarkable success in mobilising workers and peasants, many of whom had little interest in Marxism-Leninism, to join its fervent, violent cause? One of the key foundations of the CCP’s successful mobilisation was its ability to tap into human emotions, which it did most notably and effectively through a practice known as ‘speaking bitterness’ (suku)—the public expression of an individual’s woes with the intent to cultivate sympathy toward the speaker and outrage against those who caused his or her suffering. As one of the foremost strategies the CCP used … its principal purpose was to leverage morality and emotion to inculcate in the populace new mass identities that accorded with the Party-state’s ideology of class struggle. Operating through outrage and sympathy, it sought to build hostility towards an outgroup of class enemies and solidarity among an ingroup of ordinary villagers.

Now here’s where things get really interesting. Jeffrey Javed—someone few Americans have heard of—has a fascinating new job that he describes on his website (emphasis added):

Hello! I am a mixed methods researcher on the Ads Delivery team at Facebook. My research uses survey, interview, and experimental approaches to understand social perceptions of AI and machine learning, particularly in the context of fairness and responsibility. …

My research on social media built on my research on violent mobilization in Maoist China to understand how false news content harms and divides communities in the US. Combining survey experimental and machine learning approaches, we found that sensational content, rich in moral-emotional language, provokes outrage and fear and amplifies support for violence and aggressive online behavior.

Javed was hired by Facebook in Election year 2020—the year Facebook and other social media platforms with whom Facebook colludes communicates began “fact-checking” for allegedly false news and defending their warnings and punishments by claiming commitments to fairness and social responsibility.

Does Javed oppose the use of public expressions of an individual’s woes with the intent of cultivating sympathy toward the speaker and outrage against those who purportedly caused the speaker’s purported suffering? Does he oppose leveraging morality and emotion to inculcate in the populace new mass identities that accord with “progressive” ideologies? Does he oppose public humiliation or other forms of social oppression to coerce capitulation?

The Electoral College was meant to stop men like Trump from taking office.

The Electoral College is important to leftists–until it’s not.

I wonder if Javed is friends with Yoel Roth, head of “Site Integrity” for Twitter, who multiple times tweeted that President Trump and members of his administration—including Kellyanne Conway—were “actual Nazis.”

Leftists have no need to worry about any feeble resistance that may be bubbling up beneath the surface. No need to fret that wrongthink may spread. No sleepless nights fearing that leaders will emerge to oppose the oppressors who control corporate America, the castrated press, and the ideological lemmings in academia and Hollywood who produce soma for the masses.

No need for worry because Mark Zuckerberg, Jack Dorsey, Sundar Pichai, the New York Times, and Jeff Bezos’ Washington Post will step into the breach to hide stories and ideas that may interfere with their quest for global domination fairness and responsibility. Power and money, money and power.

Liberty, freedom, tolerance, inclusivity, and justice for those who think just like them.

Submission for the rest of us.