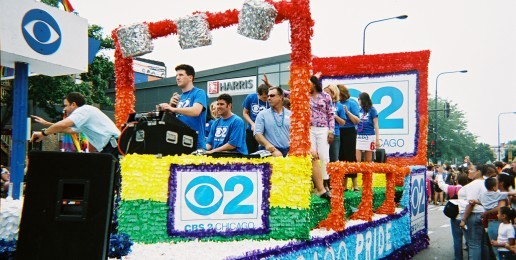 On Sunday, June 27th, one of the largest “Gay” Pride Parades in the country took place in the city of Chicago. According to the Chicago Sun-Times, supposedly 450,000 people lined the streets in the city’s Lakeview neighborhood for the 41st annual parade. The Chicago Tribune in its hard news section wrote, “While maintaining its reputation as a lively, often flashy event, the parade has also come to reflect broader acceptance of gays and lesbians. Marching politicians were followed by dancers from gay nightclubs and floats filled with employees of major corporations.” See complete article HERE.

The Tribune comments were more appropriate as commentary because the failing newspaper suggests the homosexual lifestyle is receiving “broader acceptance” from the general public. In reality, homosexuality and the alternative lifestyle represented by those who participated in and supported the parade is not a demonstration of wider support by the American people.

The truth of the matter is, if the establishment media, including the Chicago Tribune, related all the facts concerning homosexuality’s impact on our culture, the public would look at this behavior from a perspective other than something seen through rose-colored glasses.

For example, one of the major issues facing Illinois in 2010 concerns the $13 billion budget shortfall. Homosexuality is a very unhealthy lifestyle which costs taxpayers literally hundreds of millions of dollars in added health care costs. Yet you would be hard-pressed to find a story in the mainstream media in any major metropolitan area and especially Chicago which provides information on how homosexuality is taxing our economic system in a time of deep recession.

Would such a story be appropriate in a discussion of the unhealthy alternative lifestyles represented in the “Gay” Pride Parades held across the nation? In contrast, the establishment press goes out of its way to give the impression those who practice homosexuality live a carefree life, filled with boundless joy and “gaiety”.

To illustrate my point, the homosexual characters in nearly every television series are portrayed as happy, well-adjusted individuals who have a true grasp of the meaning of life. In reality, the homosexual lifestyle is very painful for those who are caught up in it. Studies conducted by the Center for Disease Control say male same-sex partners often die early. Rampant infidelity among those who practice this type of decadence leads to a hollow existence, compounded by the moral judgments this group applies to themselves.

Both the Chicago Tribune and Chicago Sun-Times say the police estimate 450,000 people lined the parade route in support of gays, lesbians, bisexuals and transsexuals. However, many of those who looked upon the parade were there for prurient interest. Often the event features what a majority of Illinois residents would refer to as obscene behavior which is in clear violation of the city of Chicago’s obscenity and decency laws. The Chicago Police look the other way while parade participants and on-lookers perform simulated and actual sex acts in public and flaunt their nudity, all in the attempt to either titillate those along the parade route or draw the ire of innocent members of the public who are subjected to an x-rated display of the most vile and perverse behavior. And it is behavior. If every human being on the planet Earth suddenly became a homosexual, the human race would die out within a generation. In addition, there is evidence, as with any addictive behavior, individuals can and do overcome the curse of homosexuality, contrary to claims by gays, lesbians, bisexuals and transsexuals who assert they are “born that way”.

Holy Scripture tells us we are to love the sinner, but hate the sin and we are all sinners in God’s eyes. But if not for the precious gift of Christ’s salvation because of the blood He shed on the cross for the remission of sins, all of us, homosexual or not, would be without hope.

Many homosexuals claim their existence and purpose for living is more than simply a choice concerning how they have sex. Yet the image presented to the public by the establishment media and those who supported and participated in “Gay” Pride Parades–not only in Chicago, but across the country–sent a very different message. So, if it is not about the sex, what was the purpose for the parades? The clear message is that homosexuality is all about the sex. And it has to be. After all, it’s the “Gay” Pride Parade.

A blogger, called Red Blooded American, put it most succinctly when replying to a Chicago Sun-Times article by writing:

They certainly hurt themselves every time they dress up in @$$less chaps and a Speedo and scream to the top of their lungs “I’m no different from you”. If you want your lifestyle to be accepted as normal, then act normal. Until then, you will struggle with acceptance.

An excellent column was written by David Smith, Executive Director, Illinois Family Institute, prior to the parade. For complete article, click HERE.

Smith lists which politicians, corporations and media organizations supported the “Gay” Pride Parade by either marching or having a float in the parade or simply financially supporting the day’s activities. Those who support the pro-family agenda should take special note of this list. Are these politicians and groups representing all of us? Or do they have a politically correct agenda which is in stark contrast to the Judeo-Christian ethic which a vast majority of Americans still embrace?

The media is supposed to be a neutral observer, reporting on the facts. However, in recent decades, commentary has blended its way into the hard news sections of news entities which cross the lines of journalistic integrity. The media’s coverage of Chicago’s “Gay” Pride Parade, by some members of the press, was a perfect illustration of tainted journalism. Sadly, when this occurs, we are all losers.

It’s Looting, Not Reparations
b
a
x
r