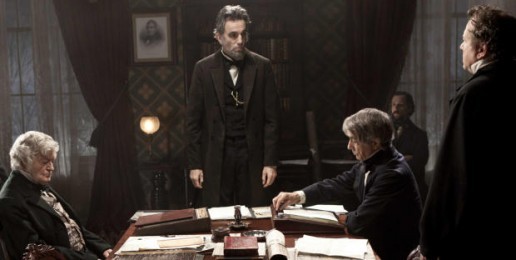 Last Thursday I had the opportunity to see the new Abraham Lincoln movie from Steven Spielberg.  It was a technical and visual masterpiece in terms of costume, cast, scenery, computer graphics, etc. Sally Field was remarkable as Mary Lincoln.   However, I agree with several historians who criticized the movie’s script, which included nearly 40 uses of profanity. They contend that certain vulgar words were not used in the 1860’s and certainly not by “honest Abe.”

Most all of the movie centers around passage of the 13th Amendment.  It shows Lincoln trying to hold all his Republicans together and gather a few lame duck Democrats for passage of the amendment prohibiting slavery in order to overcome fierce opposition from House Democrats.

Evident, but not specifically mentioned in the movie, was the fact that the Republicans were still a new party. They had only recently been formed in 1856 by social conservatives (if we can use that modern term).   The party had tension between “radical abolitionists” and more moderate slavery opponents.  The new party, according to its platform, had been founded upon ending the “twin relics of barbarism, polygamy and slavery” in America. This occurred after the Whig Party shot itself in the foot when it decided to call a truce on the divisive issue of slavery with a “36/30 degree line” proposal making some states free and some slave holding.  Even now, 156 years later, those battles over the equal value of all life, the protection of marriage as between only one man and one woman, and those who want to avoid such issues, still remain in the GOP.

A few days after seeing the movie I happened to be in an antique store where a century old book caught my eye and then my wallet. The book is called Lincoln and Prohibition.  It contains a lot of original first hand sources and Lincoln documentation including a long speech Abraham Lincoln gave to the Washingtonian Temperance Society on Feb. 22, 1842 about the effort to eliminate alcohol consumption. (He was also involved as legal counsel for an 1855 Illinois statewide temperance referendum.)  Here is how Lincoln compared that movement to our nation’s founding struggles:

“Turn now to the temperance revolution.  In it we shall find a stronger bondage broken, a viler slavery manumitted, a greater tyrant deposed — in it, more of want supplied, more disease healed, more sorrow assuaged.  By it no orphans starved, no widows weeping.

And when the victory shall be complete – when there shall be neither a slave nor a drunkard on the earth – how proud the title of that Land which may truly claim the birthplace and the cradle of both those revolutions that shall have ended in that victory. How nobly distinguished that people, who shall have panted, and nurtured to maturity, both political and moral freedom of their species.”

Twenty years later, then President Lincoln recalled his speeches in a meeting with the Sons of Temperance on September 29, 1863:

“When I was a young man, I in a humble way, made temperance speeches, and I think I may say that to this day I have never, by example, belied what I said.  I think that the reasonable men of the world would have long since agreed that intemperance [drunkenness] is one of the greatest, if not the very greatest, of all evils among mankind.”

It seems to me that Lincoln may have been much more of a Nineteenth Century social conservative than we remember him to have been.  Consider this point.  A few historians have questioned the profanity use in the Lincoln movie, including a couple by the President.  It seems highly unlikely that he spoke this way.

I spoke with historian David Barton about this, and he pointed out that early in the Civil War as Lincoln visited troops, he was distressed to hear profanity, so an order was issued against it, declaring:

“Any non-commissioned officer or soldier who shall use any profane oath or execration shall incur the penalties expressed in the foregoing article.”

Concerning those penalties, it stated that . . .

“Commissioned officers be brought before a general court-martial, there to be publicly and severely reprimanded by the President; if non-commissioned officers or soldiers, every person so offending shall for his first offence forfeit one-sixth of a dollar, to be deducted out of his next pay; for the second offence, he shall not only forfeit a like sum but be confined twenty-four hours.”

Lincoln was so serious that these rules against profanity take hold among the troops that this order was to “be read every Sunday morning to each company and detachment serving in this Army.”    He even personally confronted one of his own generals when he learned of his profanity and then urged the general to use his authority to combat that vice.

Much of history as shown by Hollywood should be viewed with a discerning eye and ear and, if possible, compared with evidence of that era.  Still, it is worth remembering that much of what we do know through original documents will never be seen or heard by those who rely upon the entertainment medium to shape their opinions and views.