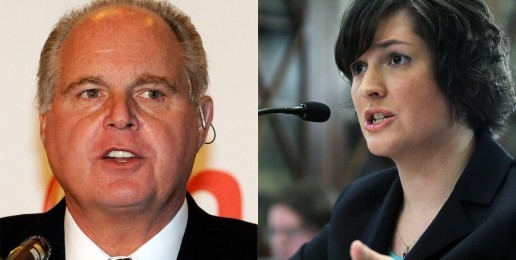 Saul Alinsky is alive and well in the political maneuverings of the secular left. The problem is; we all have the play book now.

As most know, Rush Limbaugh has been under fire of late for comments he made about 30 year-old “reproductive justice” radical Sandra Fluke. Ms. Fluke recently gained national attention while testifying before Congress. There, she demanded that Georgetown Law, a Jesuit University, underwrite her stated fornication practices by paying for her and other students’ birth control and, ostensibly, abortions. Fornication and abortion, of course, are considered “mortal sins” in Christianity. Catholic doctrine further bars the church from providing contraception.

Rush said of Fluke: “[T]hey’re talking about, like this left-wing sl-t, what’s her name? Sandra Fluke?”

Not really. Actually that bile came from the revolving pie-hole of MSNBC’s Ed Schultz in reference to conservative talk radio host Laura Ingraham. Ms. Fluke recently went on Schultz’s program to criticize Limbaugh for indirectly suggesting that, in light of her admitted sexually immoral lifestyle, she was a “sl-t” (an offensive and inappropriate slang for which he has apologized).

During the interview Ms. Fluke somehow failed to mention Schultz’s identical insult of Ingraham. (An inadvertent oversight, I’m sure.)

And speaking of double standards: the media has made much fanfare about a staged phone call from President Obama to Ms. Fluke to “ask how she was holding up.” (No call yet to the similarly aggrieved Laura Ingraham.)

Additionally, Obama has refused to return – or even answer questions about – a one million-dollar donation from serial misogynist Bill Maher who, among other things, has called Sarah Palin far worse.

Mainstream media-types have no interest in this double standard because they share it. They’re duty-bound to ignore the palpable hypocrisy. To do otherwise would undermine the absurd “GOP-has-declared-war-on-women” narrative. (By ‘women,’ of course, they mean liberal women – outnumbered by Rush-supporting conservative gals two-to-one).

Indeed, Limbaugh has become the left’s flashpoint in this twofold election year ploy to both sour women against the GOP and distract from Obama’s impending debt bomb, skyrocketing gasoline prices and the threat of a nuclear Iran.

David Burge of the Iowa Hawk blog summed it up nicely in a tweet: “How can you monsters talk about a $15 trillion debt at a time like this, when a brave coed has hurt lady-feelings?”

Yes, how can we focus on trillions in Obama debt, $6.00 gasoline and Islamo-fascists with nukes while a Georgetown “coed” is being denied free medication from Christians for her “Saturday night fever”?

Well, I have it on good authority that today Rush is chewing a big fat Padron Toro and laughing himself silly. Every time McCarthyite liberals take a swing at El Rushbo, they get their hemp-clad heinies handed to them. It’s like watching Andre the Giant toss midgets.

On Wednesday, Rush announced on his show that the “progressive” machine’s latest effort to bring him down via a sponsorship boycott was failing fantastically. Following the DNC-manufactured Fluke dust-up, Rush revealed that he has suffered zero revenue loss (even making gains); that he has a wait list of new advertisers lining up, and that some of his former sponsors – who hastily bowed to leftist pressure and dropped him – are now “practically begging to come back.”

This comes as little surprise. One such sponsor, Carbonite, saw its stock plummet by twelve percent overnight after announcing it was pulling its spots. This is what happens when a company puts partisan politics over profit.

Limbaugh – rated number one in talk radio – has tens-of-millions of loyal, activist listeners who love to spend tons of cash on the products Rush plugs. (Wonder how long before Carbonite CEO and MoveOn.org supporter David Friend “steps down” to “spend more time with his family”?)

Still, liberal attempts to sidetrack aside, the cultural issues embedded within this Fluke flap are worthy of discussion. Only a dying culture lionizes a woman who publicly impugns – with pride – her own honor and virtue. Yet, to the left, she’s a hero.

It’s genuinely sad that, as a society, we are no longer appalled that a young, single woman – though very nice, I’m sure – would go on national television nonetheless, to proudly and publicly boast that, to her, while sex is cheap and casual, dealing with the potential consequences is so expensive that those of us who disagree must subsidize her bad behavior.

Can someone please explain to me how and why a woman’s “right” to be promiscuous is my financial responsibility? If you refuse to buy your own “preventative medicine,” why not hit up the fellas? Last I heard it takes two to do the fornication Fandango.

This is by design. Secular-“progressives” have been working to deconstruct traditional sexual morality for generations. The goal is to impose – under penalty of law – their own moral relativist, sexual anarchist worldview. (Hence, the unconstitutional ObamaCare mandate requiring that Christian groups cast aside millennia-old church doctrine, and get with the postmodern program.)

But, beyond this assault on religious freedom and the moral implications surrounding the debate, Ms. Fluke has additionally set the true women’s movement back decades. Her public groveling for free contraception and abortifacients reinforces the sexist stereotype that single women can’t survive without welfare. Women’s empowerment? More like patriarchal government dependency.

Still, like so much in its propagandist bag of tricks, the left’s entire “denied access to contraception” premise is built upon a lie. Liberals would have you believe that, for decades, women seeking birth control – already cheap and often free – have been systemically tackled in front of Walgreens by a bevy of white, Republican Catholic Priests.

Name one woman who has been “denied access” to birth control – ever. Show me one Republican politico who wants to “ban contraception.”

Birth control at Walgreens? A few dollars. Taking personal responsibility for your own lifestyle choices and consequences? Priceless.

That’s all Rush was saying.