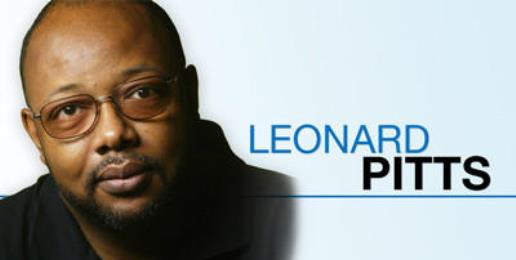 Someone needs to thump some sense into syndicated columnist Leonard Pitts for his claim that the now-vetoed Arizona religious freedom bill would have allowed “businesses to refuse service to gay people on religious grounds.” Not so, but more on that in a minute.

Nine times in Pitts’ short column he repeats the mantra “Boycott Arizona,” perhaps hoping to hypnotize an intellectually and morally slothful public. One wonders how far Pitts and his ideological ilk will take their march against diversity and tolerance. Can Arizona citizens express their conservative views on issues related to homosexuality and gender confusion in letters to the editor without Pitts ordering a boycott? Can public libraries order books from conservative scholars without Pitts caterwauling “Boycott Arizona”? How do citizens employ their speech rights—which were intended to protect even unpopular speech—if promoters of tolerance like Pitts try to make it impossible to earn a living if they do so?

What makes his command to boycott Arizona even more troubling is he doesn’t seem to  understand what the law actually entails. Eleven law professors of diverse political persuasions and perspectives on same-sex “marriage” sent a letter to Arizona Governor Jan Brewer to correct the media’s misrepresentation of the law, which they describe as “egregiously misrepresented”:

SB1062 does not say that businesses can discriminate for religious reasons. It says that business people can assert a claim or defense under [Religious Freedom Protection Act], in any kind of case (discrimination cases are not even mentioned, although they would be included), that they have the burden of proving a substantial burden on a sincere religious practice, that the government or the person suing them has the burden of proof on compelling government interest, and that the state courts in Arizona make the final decision.

This bill would have merely clarified an Arizona law that has been on the books for fifteen years. National Review editor, Rich Lowry, explains that “A religious freedom statute doesn’t give anyone carte blanche to do whatever he wants in the name of religion. It simply allows him to make his case in court that a law or a lawsuit substantially burdens his religion and that there is no compelling governmental interest to justify the burden” (emphasis added).

In his fervor to command Americans not to vacation in or do business with Arizona, Pitts forgot to mention the federal equivalent of Arizona’s proposed law, which was introduced in the U.S. House of Representatives by then U.S. Representative Chuck Shumer (D-New York) and signed into law by President Bill Clinton twenty years ago. Pitts is going to be hard-pressed to find somewhere to vacation now that the entire country is off-limits.

Pitts accuses opponents of same-sex “marriage” of going “bughouse” over comparisons to the Civil Rights Movement, but he spends no time explaining why such a comparison bothers opponents—including African American opponents of same-sex “marriage.” And he glaringly fails to provide any evidence for his implicit claim that homosexuality per se is equivalent to race or skin color, which is necessary to justify his comparison of the push to normalize homosexuality to the Civil Rights movement.

Pitts does, however, provide evidence of his theological ignorance:

Don’t be fooled by pious babblespeak that claims these laws only protect the rights of religious people who object to homosexuality. No one seeks to compel any preacher to perform a same-sex marriage if doing so violates his conscience. But if that pastor works for a bakery during the week, it is none of his business whether the wedding cake he bakes is for John and Jan or John and Joe.

Pitts’ theological ignorance is evident when he says that the content of one’s labors is religiously irrelevant to people of faith. For true followers of Christ, there should be no area of life untouched by their faith.

Pitts may not be familiar with these verses:

It is at minimum oxymoronic to argue that in the service of bringing glory to God, a Christian can take part in and profit from a ceremony that God detests.

Further, Pitts’ assertion that the sex of the partners seeking to marry is none of the baker’s business is just silly. It becomes the baker’s business when the “grooms” tell him that he will be baking a cake—in other words, using his labors and profiting from—their unbiblical pseudo-wedding.

What Pitts is really saying is that the baker shouldn’t care about whether the cake is for a same-sex pseudo-wedding or a true wedding, but what the baker cares about is not Pitts’ business.

Pitts did offer this conciliatory message: “it’s time those of us who value comity, concord and tolerance make our voices heard.”

Yes, nothing says comity, concord, and tolerance quite like these preceding words from Pitts:

[T]hese laws amount to little more than temper tantrums by last-ditch bigots who don’t realize history has passed them by as a Ferrari does a traffic cone. But perhaps there is something to be said for inflicting economic pain as a way of saying, “Cut it out.” Perhaps the right wing’s proud embrace of ignorance and intolerance has grown so toxic they demand to be confronted.

Pitts closes with a quote from Martin Luther King Jr., so I will too: “How does one determine whether a law is just or unjust? A just law is a man-made code that squares with the moral law or the law of God.”

To which I say, Amen.

Wrecking the Suburbs on Purpose

It’s the Morality, Stupid
b
a
x
r