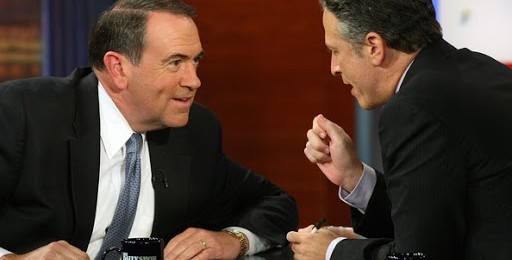 On a recent episode of the Daily Show, Jon Stewart debated Mike Huckabee on the issue of legalized homosexual marriage-an oxymoron if ever there was one. (Click HERE to watch video.)

What is truly astonishing is that Jon Stewart’s debate performance has been widely lauded by homosexuals and their supporters as “brilliant” and “erudite”-a virtual intellectual sucker-punch to the ignorant masses whose views Huckabee represented.

I guess if one measures brilliance and erudition by an applause meter or by the number of words Stewart spoke as contrasted with the number Huckabee spoke, Stewart was brilliant and erudite. Let’s remember, though, that his audience is primarily NY liberals-hence the perfervid applause-and that talk show hosts always monopolize the conversation.

On the other hand, if one measures erudition by evidence of scholarship, it’s difficult from this brief debate to determine whether Stewart has studied any serious historians, political scientists, law professors, or theologians on this issue.

And if one measures brilliance by the quality of evidence provided for an argument, or its originality, or its soundness, it’s difficult to see why Stewart’s arguments were deemed “brilliant.”

Here are a few of the arguments whose brilliance evidently blinded Stewart’s viewers to their unsoundness:

Premise 2. Homosexuality is by nature the same as race.

Homosexuality is the same as race: Homosexuality is ontologically different from race. Race is biologically determined and entails no behavioral implications whatsoever, and therefore is not amenable to moral assessment. There is no research proving that homosexual impulses are biologically determined, and no matter what causes homosexual impulses, attractions, or thoughts, homosexual conduct is volitional and therefore amenable to moral judgment. Many behaviors that may be shaped to some degree by biological factors are immoral. It is both erroneous and dangerous to suggest that the presence of biological influences renders behaviors automatically moral.

Premise 1. Access to civil marriage is an unconditional civil right.

Premise 2. All adults are entitled to all civil rights.

Conclusion 4. Therefore homosexuals are being unjustly denied their civil rights.

Access to civil marriage is unconditional: Access to marriage is conditional upon meeting a number of criteria including being the opposite sex of one’s partner.

Homosexuals are prohibited from accessing civil marriage: All adults may get marry as long as they fulfill the criteria that society has deemed essential to marriage, which pertain to number of partners, minimum age, consanguinity (i.e., blood kinship), and sexual complementarity.

Premise 1. Concepts or views of marriage are always changing. (Implied)

Conclusion: Therefore, changing the legal definition of marriage to include homosexuals is good.

Concepts or views of marriage are always changing: There is remarkable stability throughout recorded history on the complementary nature of marriage even in societies that allowed polygamy.

Premise 1. The government’s sole or central interest in and involvement with marriage is to support romantic love between people.

Conclusion: Therefore, the government should permit homosexual couples to marry.