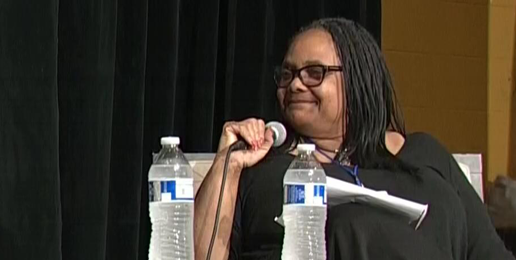 Dahleen Glanton, columnist for the Chicago Tribune, recently penned a column about homosexuality that began with this ironic statement: “It is painful to acknowledge one’s own intolerance.” Glanton doesn’t say who’s experiencing this pain, but one thing’s for sure: It’s not her. Her entire column is an exercise in religious intolerance.

Glanton-the-Tolerant writes that theologically orthodox Christians who accept as true the clear teaching of Scripture on homosexuality and marriage “don’t even recognize their own bigotry,” suggesting they contribute to a “climate of hatred” and “are wallowing in self-righteous oblivion.”

Glanton then makes this comical claim:

It is easy to read between the lines of the Bible that God doesn’t favor homosexuals. At least that’s what many churchgoing folks choose to believe.

Yes, she actually said “between the lines.”

While pontificating on what the Bible says about homosexuality, she reveals the embarrassing extent of her biblical ignorance. Maybe her ignorance and intolerance are connected.

So, let’s look at those lines between which Glanton claims some churchgoing folks choose to read God’s disfavor:

Since the focus of Glanton’s column is same-sex faux-marriage, here’s another relevant passage from Scripture. This is Jesus speaking:

But from the beginning of creation, ‘God made them male and female.’ ‘Therefore a man shall leave his father and mother and hold fast to his wife, and the two shall become one flesh.’ So they are no longer two but one flesh. What therefore God has joined together, let not man separate. (Mark 10:6-9)

I’m choosing to read in these lines and the spaces between that Jesus says marriage is the union of one man and one woman.

What set off Glanton’s intolerance radar was the disapproval of homosexuality on the parts of parents and school administrators. Parents in Elgin, Illinois objected to music teacher Nathan Etter sharing with first-grade students that he was “married” to a man. Parents in Arlington, Texas objected to art teacher Stacy Bailey showing fourth-graders photos of the woman she was going to “marry.” And the administration of a Miami, Florida Catholic school fired first-grade teacher Jocelyn Morffi after she “married” a woman—in defiance of Catholic doctrine.

Stacy Bailey is suing her district, “seeking… reinstatement at the school and possible damages.” Her lawsuit claims she was “born that way.” It will be interesting to see what hard evidence her attorney provides to prove that claim.

Moreover, equality demands that we treat like things alike, and the two types of unions are not merely unlike. They’re antithetical.

Someone should ask Glanton how she thinks homosexual teachers should demonstrate tolerance for parents who view homosexual acts and relationships as profoundly immoral and don’t want their little ones exposed to any ideas about homosexuality when they’re too young to understand critical ideas about morality, theology, epistemology (how we know what we know), ontology (the nature of things that exist), and teleology (the study of design and purpose of things that exist). These are the bases on which a moral assessment of homosexuality depend.

And how does Glanton think homosexuals—including  homosexual teachers—should  demonstrate tolerance for the Catholic Church, which teaches that homosexual attraction is disordered and homosexual acts sinful?

Glanton writes glowingly about the cultural shift in attitudes toward the legal recognition of intrinsically non-marital same-sex unions as marriages. She waxes jubilant that the number of people who “believe marriage should occur only between a man and a woman” is decreasing, including among people who identify as Christians. She cites a survey conducted by the Public Religion Research Institute that shows increasing support for same-sex pseudo-marriage among diverse demographic groups. Apparently, what the Bible clearly says carries less weight for Glanton than does the number of people who abandon the Bible’s clear teaching.

The survey identifies particularly strong support among 18-29-year-0lds. Their support should surprise no one since this is the generation that has been exposed to the most pro-homosexuality propaganda and the most pervasive censorship of dissenting ideas. Coincidentally, this is the generation least likely to have been raised by theologically orthodox and committed Christians.

They [i.e., “self-righteous” Christian bigots] are hoping that one day the law [i.e., laws permitting same-sex faux-marriage] will be reversed and the issue will go away for good. But that’s not going to happen, and it’s time those holdouts accepted it.

Not being a prophet myself, I can’t vouch for the accuracy of this prophesy, but it may well be borne out. Scripture teaches that “For the time is coming when people will not endure sound teaching, but having itching ears they will accumulate for themselves teachers to suit their own passions.”

But as for true Christ-followers accepting the absurd notion that two people of the same-sex can be in reality married? Never.

Glanton proclaims that “people don’t even recognize their own bigotry…. They just don’t think that people who happen to be gay deserve the right others have to choose with whom to make a lifetime commitment.”

Glanton is wrong. While people may just “happen” to experience same-sex attraction, they don’t just “happen ” to affirm it as a positive part of their identity. That is a choice they make.

Glanton is wrong again. Christians don’t say anything about the “right” of homosexuals to make a lifetime commitment to persons of the same sex. Rather, Christians say marriage is something. It has a nature central to which is sexual differentiation and without which a union is not marital. Christians and other conservatives say that homosexuals have no more “right” to unilaterally jettison the criterion of sexual differentiation from the definition of marriage than polyamorists have a right to jettison the criterion related to number of partners or sibling-lovers have a “right” to jettison the criterion of consanguinity (i.e., blood kinship).

Without engaging the ideas of a single theologically orthodox biblical scholar, the biblically ignorant and sanctimonious Glanton refers to biblical orthodoxy as “baggage” from “religious teachings” and as “outdated beliefs… based on pure ignorance.”

While Glanton considers biblical prescriptions for marriage and proscriptions of homosexual acts “outdated,” here are the words of Jesus:

Do not think that I have come to abolish the Law or the Prophets; I have not come to abolish them but to fulfill them. For truly, I say to you, until heaven and earth pass away, not an iota, not a dot, will pass from the Law until all is accomplished.

Glanton said one thing with which I heartily agree:

It takes a conscious effort to acknowledge one’s own intolerance. But it takes an even greater effort to go through the process of learning and understanding what is necessary to reverse it.