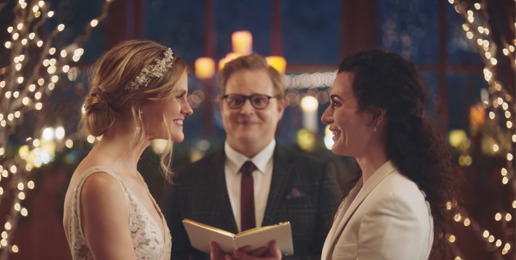 Hallmark Reveals a Big Yellow Stripe Running Down Its Spineless Back
Written By Laurie Higgins   |   12.19.19
PRINT

As most breathing people now know, the Hallmark Channel, known for airing movies that families with intact moral compasses can watch with their children, upset its apple cart last week by secretly tossing in a poisoned apple for the kiddies to feast on. The apple came in the form of a commercial for the wedding planning website Zola that depicted a couple standing together at a glittering, Hallmark-worthy wedding altar at which they say their I do’s and then kiss. The poison was the smoochers were two women.

To be clear, I am not arguing that homosexual persons per se are poisonous. I am arguing that a glossy, prettified image of a deeply sinful type of union is poisonous to the minds and hearts of children who are especially vulnerable to propaganda.

Not surprisingly, parents and grandparents with intact moral compasses were shocked and angry. They felt blindsided and betrayed by a channel they had, heretofore, been able to trust. They expressed their anger and disappointment to Hallmark, many via a petition started by One Million Moms, a division of the American Family Association, which asked that Hallmark “reconsider airing commercials with same-sex relationships” and to refrain from adding “LGBTQ movies to the Hallmark Channel.” Hallmark removed the ad, and then the “LGBT” lobby took aim. Somehow, in just two days, those oppressed, silenced, marginalized, persecuted, powerless homosexuals we hear so much about were able to persuade Hallmark that it owes more to them than it does to conservatives.

We are truly sorry for the hurt and disappointment this has caused. … We have LGBTQ greeting cards and feature LGBTQ couples in commercials. We have been recognized as one of the Human Rights Campaigns Best Places to Work. … Hallmark will be working with [the Gay and Lesbian Alliance Against Defamation] to better represent the LGBTQ community across our portfolio of brands.

Note, there was no apology to theologically orthodox Christians whose identity is found in Christ and who are striving mightily to protect their children from ideas and images that violate what Scripture teaches.

This is what happens when people without an intact moral compass lead. They are buffeted about by the cultural winds and their own love of money.

The holidays are a time of family, generosity and decency. @hallmarkchannel should reconsider their misguided decision to ban an ad featuring a same-sex couple. Representation is important in all forms of media—even advertising.

Lots of nonsense to unpack.

Second, commitments to generosity do not require humans to affirm everything that other humans feel, desire, think, and do. In the spirit of generosity, would Lightfoot affirm the feelings and beliefs of theologically orthodox Christians on matters related to sexuality? In the spirit of generosity, would she agree to allowing even one streaming service to decline to show ads or programming that depict images of homoerotic relationships?

Movies and commercials are family-friendly when they include all sorts of families and when they acknowledge that love isn’t reserved for straight people.

Does Stevens think that in order for movies and commercials to be family-friendly, they should include polyamorous and polygamous families? What about families where the parents are two brothers who experience Genetic Sexual Attraction?

In every society, some group will be oppressed. Some beliefs will be deemed anathema. Some actions will be viewed as immoral and stigmatized. There will never be a time or place when “judgmentalism”—that is, making distinctions about the rightness or wrongness of ideas and acts—will cease. Now, as faith in the one true God wanes in America, increasing numbers of people walk in the counsel of the wicked, stand in the way of sinners, and sit in the seat of scoffers.

Let’s see how Hallmark fares in the next year or so with only the “LGBT” crowd and its allies to support it. Oh wait, Hallmark is going to start offering family-friendly homosexual fare (now there’s an oxymoron if ever I heard one). With assistance from the “LGBT” division of Hallmark Cards, the Hallmark Channel shouldn’t find such brown-nosing too difficult.