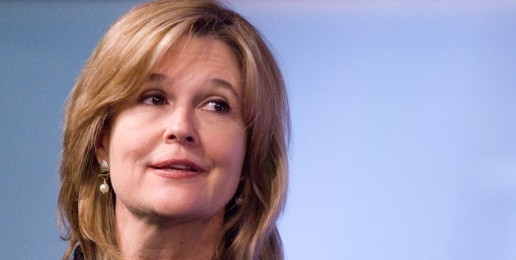 Kathleen Parker is the “conservative” columnist liberals can count on to bash conservative personalities and causes. This is why her column is syndicated by the Washington Post and why she is featured on the Chris Matthews show.

Now, Parker has done her best imitation of lesbian MSNBC-TV commentator Rachel Maddow by writing a column bashing Uganda’s Christian majority for considering passage of a bill to toughen laws against homosexuality. This has been a Maddow cause for months, and Parker is now on the bandwagon.

When the MSNBC-TV host isn’t attacking Christians here and abroad for opposing homosexuality, she is promoting homosexuality in the U.S. military, as Post media critic Howard Kurtz was recently forced to acknowledge in a story about her preoccupation with this matter. But it’s really not surprising. Maddow’s show is an extension of her lesbian lifestyle. She is gay and proud and given free rein at MSNBC because of her role as the first “out” lesbian to host a show on a national cable news network.

It’s another “first” for the homosexual lobby and the media, which seem to go together.

Parker’s interest in the issue is not as clear but it may stem from her eagerness to please those who syndicate her column and quote her approvingly in the liberal press. This is how “conservatives” become mainstream media stars. However, her column is even worse in its accusations and charges than what we can find in the hysterical gay press. Parker finds those Christians opposed to homosexuality in Uganda and who base their opposition on the Bible to be in favor of “genocide.”

Losing complete control of her senses, Parker states that a proposed law against homosexuality constitutes “state genocide of a minority [that] is proposed in the name of Christianity…”

Once again, as we have documented on so many occasions, the death penalty in the bill is only one provision and is for “aggravated homosexuality” or serious crimes mostly involving homosexual behavior targeting children and spreading disease and death.

The potential genocide in Uganda is the AIDS epidemic that the government and Christian leaders are successfully combating. They understand, although Parker apparently does not, that homosexual behavior promotes the spread of AIDS.

There is a myth that AIDS in Africa has been spread exclusively through heterosexual conduct. But the internationally acclaimed medical journal The Lancet last August published the first scientific study showing that male homosexuals are more often than not infected with HIV than the general adult population in sub-Saharan Africa. The study is titled, “Men who have sex with men and HIV/AIDS in sub-Saharan Africa.”

Here, all of this is out in the open and well-known. Indeed, the Cato Institute held an event on Wednesday in which HIV-positive writer Andrew Sullivan strode to the podium during a conference on “gay conservatives” with ashes on his forehead from having attended a Catholic Church Ash Wednesday service. Sullivan was caught soliciting a partner for dangerous “bare-backing” sexual practices and has since “married” another man. This is “conservative?”

Like Kathleen Parker, he is still considered a “conservative” by some and was introduced by Cato executive David Boaz, a member of the Independent Gay Forum and pro-marijuana activist. Like Sullivan, Cato is also misleadingly described in the media as “conservative” too many times to mention.

Today, as the Conservative Political Action Conference (CPAC) gets underway in Washington, D.C., participants will find a literature table established under official CPAC auspices from a homosexual Republican group calling itself GOProud. CPAC organizer David Keene, whose lobbying activities have been an embarrassment to the conservative movement, approved letting the gay rights organization officially attend the conference, despite complaints from traditional conservative groups such as Catholic Families for America.

Talk of tolerance and diversity aside, male homosexuals constitute most of the HIV-AIDS cases and they are still prohibited from donating blood because of their propensity to come down with various life-threatening diseases. Facts are facts. But don’t expect to see this information analyzed and reviewed by the mainstream media when considering such issues as allowing active and open homosexuals into the Armed Forces and into close quarters with normal heterosexuals.

Gay activists complain that thousands have been forced out of the military because of their homosexuality. The evidence, in the form of opinion polls and letters from former military officers, suggests that many thousands more will leave if the military brass force acceptance of homosexuality-and the diversity training that will inevitably go along with it-on the military rank and file.

The purpose of the Ugandan bill, quite clearly, is to keep homosexuality in the closet, where it used to be in this country. The country’s literal survival may depend on passage of this legislation, after it undergoes hearings and some revisions.

The bill will likely have more of a deterrent effect than anything else. Some of the controversial passages, such as restrictions on “touching,” are included for the purpose of defining homosexual behavior. It may sound strange to Americans who are accustomed to in-your-face homosexuality on national television and almost everywhere else in society, but Uganda is serious about avoiding a return to the time when a notorious homosexual king was ruling the country and tortured and killed young Christian men who resisted his homosexual advances.

Ironically, Parker makes reference to this terrible period, but only to contrast it with a frightening future in which she speculates that gays will be offered up by authorities in Uganda as martyrs for the gay rights cause. To drive the point home, a gay rights group recently held a news conference in Washington, D.C. featuring an alleged gay rights activist from Uganda wearing a paper sack over his head. It was a good publicity stunt, designed to generate sympathy and attention for people who only want the “right” to celebrate a behavior that is a documented public health hazard.

Hedge fund manager George Soros, who is behind the campaign to homosexualize Uganda, doesn’t wear a bag over his face and doesn’t need to. He operates mostly out in the open, in the name of promoting his version of an “open society” here and abroad. The problem is that most of the liberal media agree with his policies and proposals and therefore don’t shed light on what he is doing in terms of interfering in the affairs of not only the U.S. but other nations of the world.

In fact, the Ugandan legislation seems designed to send a message to Soros and his minions in the foreign homosexual lobby to keep their hands off Uganda’s families and kids. Soros funds efforts to legalize homosexual behavior and prostitution in Uganda and other African nations. It’s too bad Parker didn’t notice and condemn that. But such a reference might provoke criticism from the left, and she wants to avoid that so she can keep going on the Matthews show.

The eminent historian Paul Johnson, who was recently on C-SPAN taking questions from viewers, has something to say about this. His book The Quest for God  laments that Western society made a huge mistake by decriminalizing homosexuality and thinking that acceptance of the lifestyle on a basic level would satisfy its practitioners. Instead, he wrote, “Decriminalization made it possible for homosexuals to organize openly into a powerful lobby, and it thus became a mere platform from which further demands were launched.” It became, he says, a “monster in our midst, powerful and clamoring, flexing its muscles, threatening, vengeful and vindictive towards anyone who challenges its outrageous claims, and bent on making fundamental-and to most of us horrifying-changes to civilized patterns of sexual behavior.”

Today, this monster makes even more demands and inroads, especially into our government, as President Obama appoints subversives such as homosexual activist Kevin Jennings to the Education Department, and some poor mixed-up “transgendered” person to a post at Commerce. Plus, adding to our health care problems, he has lifted the ban on AIDS-infected foreigners from traveling to and living in the U.S.

His gays-in-the-military proposal would not only make the Armed Forces a laughingstock but would end its value as a fighting force capable of defending us against foreign threats. Indeed, a homosexualized military could itself become a threat, just like it was in the Nazi period.

Instead of finding a “monster” in a gay rights movement that wants to impose itself on all of us, including our children in the schools, Kathleen Parker finds the monster to be the Christians in Uganda who want to spare their children from a lifestyle that too frequently ends in premature death. She accuses them of “genocide” for being patriots and good parents. Shame on her.

Parker’s “conservatism” is a farce and a fraud. But it seems to be in fashion at CPAC this year.