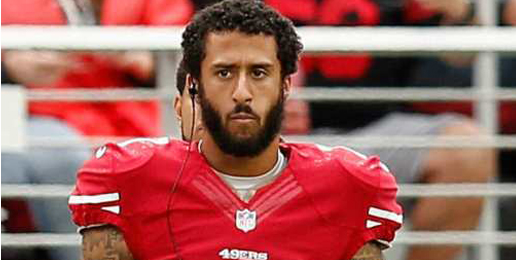 Colin Kaepernick, NFL quarterback for the San Francisco 49ers, has generated a dust-up over his refusal to stand during the “Star Spangled Banner.” Kaepernick said “I am not going to stand up to show pride in a flag for a country that oppresses black people and people of color.”

For those who don’t know, Colin Kaepernick was adopted by a white family after his destitute, 19-year-old, white birth mother gave him up. His black biological father abandoned him and his mother before his birth. Kaepernick excelled at basketball, baseball, and football in high school and in addition to a football scholarship, he was offered multiple scholarships to play collegiate baseball. He has made millions playing for the NFL since 2011.

So, some questions for Kaepernick:

Does your assessment of the unworthiness of America include the sacrifices of soldiers who have given their lives to defend and protect people all around the world? Does it include men like my father who served and suffered during WWII? Does it include missionaries and medical personnel like Jim Elliot and Natalie Bullock who sacrificed the comforts you enjoy and sometimes their lives because they love people of color?

Could it be that the “country” that oppresses people of color is primarily constituted by Democrats?

One of the many problems with public schools today is the imbalanced and dishonest way they address the entwined issues of race and American history. Leftist “agents of change” (also known comically as teachers) present a lopsided view of American history, emphasizing the injustices that mar America’s history while de-emphasizing America’s social and political progress and acts of justice and compassion that ignite the imaginations of oppressed peoples around the world. America undeniably has a troubling history with regard to race, but that’s not the whole story.

America also has a remarkable history of racial and ethnic integration and an admirable history of self-correction. Is there a country on the planet that has as successfully integrated as many diverse racial, ethnic, and religious groups as America? Is it possible to walk through a mall or a public school in America without seeing interracial couples or interracial, inter-ethnic groups of teenagers chatting and laughing together? Can you enter a church without seeing families that are multiracial by choice through adoption?

This is a country whose founding principles and documents have made possible the kind of social progress that enabled a biracial baby to be adopted by a white family and go on to earn millions. This  is the country Kaepernick sees as “oppressive” and others see as a social and political marvel.

The American flag represents the greatest nation in history. It’s a country that countless people have died to defend or died in the attempt to arrive at its shores. While Kaepernick continues to publicly demonstrate his disappointment with our imperfect union, perhaps he could tell us which country’s flag he finds worthy of respect.