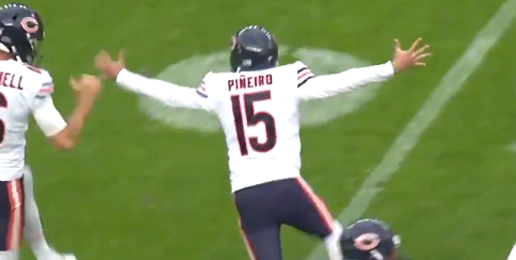 Last Sunday in an on-air, post-game interview and subsequent tweet, Chicago Bears kicker Eddy Piñeiro Jr. said, “If you don’t believe in God you better start believing he’s REAL.” Anyone watching the moment with eyes unclouded by hatred of and rebellion against God, could see the joy of a man who wants to share his joy with others. But what Chicago Tribune opinion columnist Eric Zorn saw was this:

Piñeiro’s post-game remarks—including a follow-up tweet—were a taunt, not an expression of humility. They implicitly derided nonbelievers and deployed his success as evidence of the superiority of his theological outlook.

Zorn mistook a wish for a taunt, joy for arrogance.

Zorn then meanspiritedly mocks and mistranslates (or transmogrifies) Piñeiro’s statements, twisting them beyond recognition:

I made a field goal, therefore Jesus is real and atheists and agnostics should get on board!

Serious, theologically orthodox Christians don’t believe Jesus is real because of the successes they experience or gifts they are given. In fact, the Bible teaches that Christ-followers like every other human in this fallen world will suffer: “We are afflicted in every way, but not crushed; perplexed, but not driven to despair; persecuted, but not forsaken; struck down, but not destroyed.”

Maybe Piñeiro, who evidently loves Jesus and desires that all would come to know and love Him, wanted to take this opportunity to share some really good news—news about Christ. Maybe Piñeiro wants atheists and agnostics to one day see the kingdom of Heaven. Is that wish a taunt or an expression of love for the lost?

While Zorn may know a thing or two about writing, he’s as bad at theology as is his ideologue-in-arms Rex Huppke, so here’s a primer in theology (trigger warning for Zorn who may find Jesus’ belief “in the superiority of his theological outlook” off-putting):

Zorn’s beef is really with God.