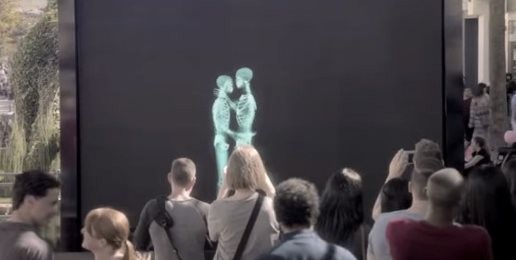 A viral video titled “Diversity & Inclusion–Love Has No Labels” provides clear evidence to disprove theories of social evolution. The public (dis)service video is an emotionally compelling, intellectually specious, and morally destructive piece of propaganda from the Ad Council:

The ad shows a throng of people at an outdoor mall watching a series of people dancing, hugging, caressing, and/or kissing behind an x-ray screen. Initially, the bewildered viewers can see only skeletons with accompanying text that says “love has no gender,” “love has no race,” “love has no disability,” “love has no age,” or “love has no religion.” Then the fleshy owners of the skeletons emerge revealing different types of relationships. The skeleton image is a visual metaphor for the cliché notion that love is more than skin deep.

By initially obscuring the types of relationships depicted, the ad’s creators cunningly lead viewers to feel that all forms of love are indistinguishable. By adding simplistic captions about gender, race, disability, age, and religion, the video conflates different ontological categories. The ad thereby reinforces both the notion that all forms of love are identical, and that homosexuality is by nature analogous to race, disability, age, and religion. So many falsehoods promoted through captivating images and music with nary a tidbit of intellectual justification.

The ad’s creators assert only one proposition, which they don’t even attempt to prove. They assert in the video’s title that “love has no labels”—which is patently false. Without defining love or proving that “love has no labels,” the ad’s creators knowingly or ignorantly confuse types of love with human conditions. While they claim that love has no labels, they really mean that the categories of gender, race, disability, age, and religion have no relevance to love. They treat all types of human conditions as if they’re irrelevant to an evaluation of the moral legitimacy of a nebulous, undefined thing called l♥ve.

The intellectual and moral incoherence of this mess of a video is revealed if you follow the logic of its “argument” to its icky end.

If amorphous love is all there is—just one big gooey puddle of love—then why not have two caressing, kissing skeletons emerge from behind the universalizing screen in all their fleshly glory to reveal themselves as an adult man and teenage boy?

Queen Latifah, long-rumored to be a lesbian, officiated at the “weddings” of 33 couples, many of whom were same-sex couples, while accompanied by the preachy, feckless song “Same Love” by Macklemore….It was a sorry, sick, non-serious ceremony that looked like something from the garish dystopian world of the Hunger Games, replete with a cheering sycophantic audience, faux-stained glass windows, a faux-choir, [and] a homosexual faux-pastorette….It was a non-wedding festooned with all the indulgent gimcrackery of Satan’s most alluring playground: Hollywood.

This new ad is a pernicious yet likely effective cultural tool for a soma-doping nation. In Amusing Ourselves to Death, Neil Postman warns:

It’s both a tragedy and a travesty that fools now control most of our cultural institutions. For some of these culture-makers, “fools” is too generous. It would be more accurate to describe them as broods of vipers who are hell-bent on destruction.

We cannot stress the importance of your monthly support.