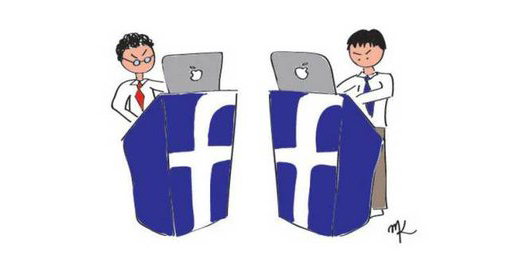 Race-based hostility has intensified over the past ten years, hostility that is exacerbated by political policies that harm the black community, political rhetoric that seeks to maintain racial division, and government schools that embrace and promote Critical Race Theory. Over the weekend, racial hostility popped up in a most unlikely place: the comments section of Illinois Family Institute’s Facebook page under a short article about a homosexuality-celebrating float in an Independence Day parade and a tranny-training camp for children called “Camp Drag” being held this summer at the Ames, Iowa public library.

Here are the comments left by “Trevor Thompson” followed by my responses:

Higgins: Who is “y’all”? Surely, you’re not suggesting that all white men (or only white men) commenting on this thread are responsible for the homosexuality that corrupts our parades, poisons childhood in America, and harms individuals and the public good.

Higgins: Yeah, as a colorless woman who has never owned slaves, raped women, sodomized men, or thought that colorful people were of lesser value than colorless people, the shoe definitely does not fit.

If you think it’s justifiable to say to white men that “y’all raped and sodomized black slaves,” we’ll never make any headway in erasing the racial divide.

“Trevor Thompson”: I’m a black man. That Jesus ain’t done nothing for me or my people. Gtfoh!!!

[For those unfamiliar with texting argot, GTFOH, which stands for “get the f*** out of here,” is an expression of disbelief.]

Higgins: I think you may misunderstand who is responsible for the pernicious evil visited upon blacks during slavery and after. It wasn’t Jesus who caused that evil. It was fallen humans.

That said, God does alleviate all manner of suffering from illnesses, accidents, and injustice. It happens every day, all around us. The fact that you are not enslaved today is testament to God’s goodness.

But this world will continue to suffer until Christ’s return. At that point all of us will be judged once and for all for our sins. And those white people throughout history who killed, enslaved, brutalized, and treated with contempt those whom they viewed as inferior will receive the just judgment of God. So, too will the people of color–including blacks–who have killed, enslaved, brutalized and treated with contempt other fellow humans.  Whites do not have a monopoly on the sin of slavery, racial prejudice, or the brutalization of others.

Matters related to race are complicated and emotionally fraught. The incomprehensible institution of slavery and its evil aftermath continue to wreak pain and havoc. The effects lurch on, down dark, twisting, thorn-encrusted paths gouging barely healed skin. Small or gaping wounds bleed.

Words can be thorns that gouge and wound or a balm that soothes and heals. And there is another path, straight but narrow, that will lead to perfect healing.