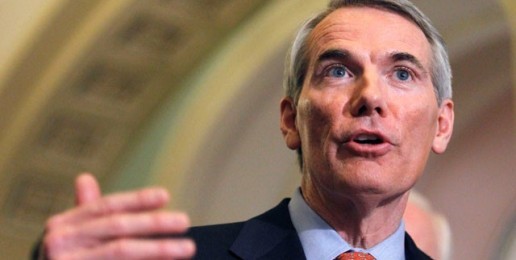 Ohio Republican U.S. Senator Rob Portman’s political and theological views on marriage have evolved (or devolved depending on one’s perspective on truth). He has concluded not only that marriage has no inherent connection to sexual complementarity, reproductive potential, or the rights of children, but also that it is appropriate to impose his political and theological views on the entire country through the legalization of “same-sex” marriage. (Isn’t “imposing” what “progressives” claim conservatives are doing when they seek to retain sexual complementarity in the legal definition of marriage?)

And what precipitated this radical shift in Portman’s political and theological views?  His son is homosexual.

So, you have a loved one who’s homosexual and presto change-o marriage becomes a genderless institution wholly unrelated to reproductive potential and children’s inherent rights. Got it.

Portman explained that he wants all of his children to have happy lives with the people they love. News to Portman, homosexuals are free to live with the people they love and to commit to remain faithful to them for life. Portman seems to have adopted the foolish and pernicious notion that the government’s reason for being involved in marriage is to affirm love.

He also implies that loving, living with, and committing to one’s sexual partner for life are insufficient for attaining happiness. Nope, what’s necessary for happiness in Portman’s political and theological universe is for the government to affirm love.  That, my friends, epitomizes big government liberal dogma.

According to the Associated Press, “[Portman’s] previous views on marriage were rooted in his Methodist faith. ‘Ultimately, for me, it came down to the Bible’s overarching themes of love and compassion and my belief that we are all children of God,’ [Portman] wrote.”

Apparently, Portman now rejects God’s overarching plan for marriage and holy sexuality for his children because his son wants to marry and have sex with a man. What if Portman’s son had announced he was bisexual or polyamorous? Would Portman then seek to have the government recognize plural unions as marriages?

Imagine if we all did exegesis like Portman. Imagine if everyone decided that the “Bible’s overarching themes of love and compassion” and the “belief that we’re all children of God” compel us to affirm all the feelings, beliefs, and life choices of our loved ones. Scary. The truth is, it is entirely possible to deeply love people while finding their feelings, beliefs, and life choices disordered or false.  In this wildly diverse world, most of us do it all the time.

As a Methodist, Portman would do well to think deeply about what John Wesley, founder of the Methodist movement, had to say about sin:

. . . [T]he First use of [the law] without question is, to convince the world of sin. This is, indeed, the peculiar work of the Holy Ghost; who can work it without any means at all, or by whatever means it pleaseth him. . . . But it is the ordinary method of the Spirit of God to convict sinners by the law. It is this which, being set home on the conscience, generally breaketh the rocks in pieces. It is more especially this part of the word of God which is . . . quick and powerful, full of life and energy, “and sharper than any two edged sword.” This, in the hand of God and of those whom he hath sent, pierces through all the folds of a deceitful heart, and “divides asunder even the soul and the spirit;” yea, as it were, the very “joints and marrow.” By this is the sinner discovered to himself. All his fig-leaves are torn away, and he sees that he is “wretched, and poor, and miserable, and blind, and naked.” The law flashes conviction on every side. He feels himself a mere sinner. He has nothing to pay. His “mouth is stopped,” and he stands “guilty before God.”

To slay the sinner is, then, the First use of the law; to destroy the life and strength wherein he trusts, and convince him that he is dead while he liveth; not only under the sentence of death, but actually dead unto God, void of all spiritual life, “dead in trespasses and sins.” The Second use of it is, to bring him unto life, unto Christ, that he may live. It is true, in performing both these offices, it acts the part of a severe school-master. It drives us by force, rather than draws us by love. And yet love is the spring of all. It is the spirit of love which, by this painful means, tears away our confidence in the flesh, which leaves us no broken reed whereon to trust, and so constrains the sinner, stripped of all, to cry out in the bitterness of his soul, or groan in the depth of his heart,

And to “progressives”: In light of Portman’s (and Obama’s) religious justifications for their support for the legalization of “same-sex marriage,” please stop caterwauling that those who want the government to retain sexual complementarity in its legal definition of marriage are engaging in some sort of unconstitutional violation of the separation of church and state.