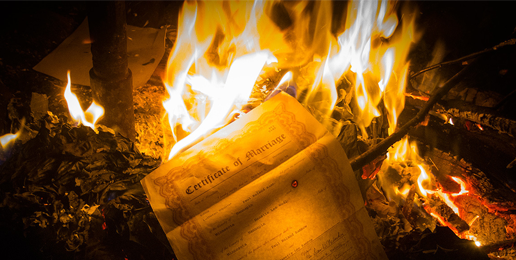 “I also think… that it is a no-brainer that the institution of marriage should not exist.”
~ lesbian activist Masha Gessen

Let’s try a little thought experiment. Let’s imagine that now, after legally recognizing intrinsically non-marital same-sex unions as “marriages,” we notice that there remains a unique type of relationship that is identified by the following features: it is composed of two people of major age who are not closely related by blood, are of opposite sexes, and engage in the only kind of sexual act that is naturally procreative. We decide that as language-users there must be a term to identify this particular, commonplace, and cross-cultural type of relationship. Let’s call it “huwelijk.”

I suspect that homosexuals would not accept such a linguistic distinction. They would not accept it even if they enjoyed all the practical benefits society historically accorded to sexually complementary couples and even if their unions were legally recognized as marriages.

Homosexuals would not tolerate such a legal distinction because their tyrannical quest for universal approval of homoerotic relationships cannot be achieved unless they obliterate all distinctions—including linguistic distinctions—between homosexual unions and heterosexual unions. Homosexuals—whose unions are naturally sterile—would not tolerate any term that signifies the naturally procreative union between one man and one woman.

In the novel 1984, George Orwell named the process in which homosexuals (as well as the “trans” cult) regularly engage: Newspeak. Here is how Orwell explained Newspeak:

[W]ords which had once borne a heretical meaning were sometimes retained for the sake of convenience, but only with the undesirable meanings purged out of them. (emphasis added)

Homosexuals and their allies seek to redefine words in the service of their ideology and would surely oppose any word that would signal a distinction between heterosexual unions and homosexual unions. A new term that pointed to the reality that homosexual and heterosexual unions are not identical would carry the risk that positive connotations would accrete to the term “huwelijk.”

There exists in such a case a certain institution or law; let us say for the sake of simplicity, a fence or gate erected across a road. The more modern type of reformer goes gaily up to it and says, “I don’t see the use of this; let us clear it away.” To which the more intelligent type of reformer will do well to answer: “If you don’t see the use of it, I certainly won’t let you clear it away. Go away and think. Then, when you can come back and tell me that you do see the use of it, I may allow you to destroy it.” This paradox rests on the most elementary common sense. The gate or fence did not grow there. It was not set up by somnambulists who built it in their sleep. It is highly improbable that it was put there by escaped lunatics who were for some reason loose in the street. Some person had some reason for thinking it would be a good thing for somebody. And until we know what the reason was, we really cannot judge whether the reason was reasonable. It is extremely probable that we have overlooked some whole aspect of the question, if something set up by human beings like ourselves seems to be entirely meaningless and mysterious. There are reformers who get over this difficulty by assuming that all their fathers were fools; but if that be so, we can only say that folly appears to be a hereditary disease. But the truth is that nobody has any business to destroy a social institution until he has really seen it as an historical institution.

Marriage is in tatters, but Leftists want those tatters torched. Next up from “progressive” pyros: “eliminating the binary”—of marriage. Polyamorists are on the move. “Progressives” just love the smell of napalm all day long.

The Mind of Godless Man is Both Silly and Dangerous

The Way Back to Religious Liberty
b
a
x
r