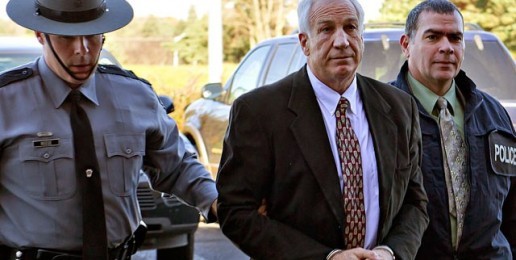 What would "civil libertarians" and feminist writer Judith Levine say about the Penn State scandal in which football coach Jerry Sandusky is accused of years of child sexual abuse?
The Postmodern Pedophile
12.20.11
PRINT

Meet the academics who try to redefine pedophilia as “intergenerational intimacy.”

The anger and disgust that most of us experienced when we learned of the allegations of sexual abuse of boys in the sports programs at Penn State and Syracuse University suggest that our cultural norms about the sexual abuse of minors are intact. Yet it was only a decade ago that a parallel movement had begun on some college campuses to redefine pedophilia as the more innocuous “intergenerational sexual intimacy.”

The publication of Harmful to Minors: The Perils of Protecting Children from Sex promised readers a “radical, refreshing, and long overdue reassessment of how we think and act about children’s and teens’ sexuality.” The book was published by University of Minnesota Press in 2003 (with a foreword by Joycelyn Elders, who had been the U.S. Surgeon General in the Clinton administration), after which the author, Judith Levine, posted an interview on the university’s website decrying the fact that “there are people pushing a conservative religious agenda that would deny minors access to sexual expression,” and adding that “we do have to protect children from real dangers … but that doesn’t mean protecting some fantasy of their sexual innocence.”

This redefinition of childhood innocence as “fantasy” is key to the defining down of the deviance of pedophilia that permeated college campuses and beyond. Drawing upon the language of postmodern theory, those working to redefine pedophilia are first redefining childhood by claiming that “childhood” is not a biological given. Rather, it is socially constructed — an historically produced social object. Such deconstruction has resulted from the efforts of a powerful advocacy community supported by university — affiliated scholars and a large number of writers, researchers, and publishers who were willing to question what most of us view as taboo behavior.

Postmodern theorists are primarily interested in writing that evokes the fragmentary nature of experience and the complexity of language. One of the most cited sources for this is the book Male Intergenerational Intimacy: Historical, Socio-Psychological and Legal Perspectives. This collection of writings by scholars, mostly European but some with U.S. university affiliations, provides a powerful argument for what they now call “intergenerational intimacy.” Ken Plummer, one of the contributors, writes that “we can no longer assume that childhood is a time of innocence simply because of the chronological age of the child.” In fact, “a child of seven may have built an elaborate set of sexual understandings and codes which would baffle many adults.”

Claiming to draw upon the theoretical work of the social historians, the socialist-feminists, the Foucauldians, and the constructionist sociologists, Plummer promised to build a “new and fruitful approach to sexuality and children.” Within this perspective there is no assumption of linear sexual development and no real childhood, only an externally imposed definition.

Decrying “essentialist views of sexuality,” these writers attempt to remove the essentialist barriers of childhood. This opens the door for the postmodern pedophile to see such behavior as part of the politics of transgression. No longer deviants, they are simply postmodern “border crossers.”

In 1990, the Journal of Homosexuality published a double issue devoted to adult-child sex titled “Inter-generational Intimacy.” David Thorstad, former president of New York’s Gay Activists Alliance and a founding member of the North American Man/Boy Love Association (NAMBLA), writes that “boy love occurs in every neighborhood today.” The movement continues but has gone underground since NAMBLA found itself embroiled in a $200 million wrongful death and civil rights lawsuit filed in U.S. District Court in Boston. The suit claims that the writings on NAMBLA’s website caused NAMBLA member Charles Jaynes to torture, rape, and murder a 10-year-old Boston boy.

Not so long ago, the postmodern pedophiles had help in defining down their deviance from the American Psychological Association. In 1998, the association published an article in its Psychological Bulletin that concluded that child sexual abuse does not cause harm. The authors recommended that pedophilia should instead be given a value-neutral term like “adult child sex.” NAMBLA quickly posted the “good news” on its website, stating that “the current war on boy-lovers has no basis in science.”

It appears that a number of postmodern pedophiles have taken the advice to heart. For a while, we lived in a culture in which man-boy sex was not only tolerated, it was celebrated. And while the furor over the allegations at Penn State and Syracuse reveals that male pedophilia remains contested terrain for most, women-girl sex, because of the power of the women’s movement, scarcely registers on the cultural radar screen.

“The Vagina Monologues,” for example, is still part of the standard dramatic repertory in student productions on college campuses –including Penn State and Syracuse. The original play explores a young girl’s “coming of age,” beginning with a 13-year-old girl enjoying a sexual liaison with a 24-year-old woman. Later published versions of the play changed the age of the young girl from 13 to 16 years old, and the play continues to be performed. Last year’s February production at Syracuse was enhanced by inviting an “all-faculty” cast to perform the play on campus.

While the anger over the recent sex abuse allegations would suggest that the deviant label will remain for pedophilia, the reality remains that powerful advocates with access to university presses will continue their semantic and ideological campaign to define down this form of deviance.

Anne Hendershott is Distinguished Visiting Professor at The King’s College, New York, NY. She is the author of The Politics of Deviance (Encounter Books).