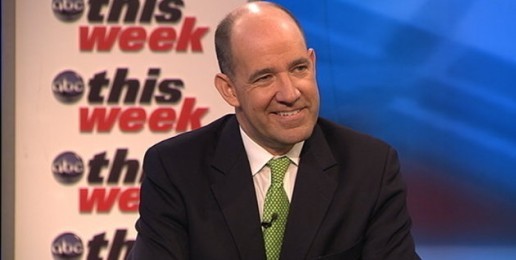 I hope anyone who listens to Sunday morning news program pundits does so with a critical ear.

As almost everyone knows, late last week U.S. Senator Rob Portman (R-Ohio) announced that he now favors the legalization of same-sex marriage. Portman is motivated to eliminate sexual complementarity from the legal definition of marriage because his son is homosexual.

Portman has received some criticism—justifiably in my view—from both the left and right for the self-serving and emotional justifications for his position reversal. (Read more HERE.)

This past Sunday on This Week with George Stephanopoulos, the Matthew Dowd had this to say about Portman’s embrace of “same-sex marriage”:

Rob Portman I know well….And the people that I think that have criticized him and said, “oh, by the way, he only did it was a personal thing that affected him personally, he wasn’t going to do it otherwise.” To me, why do we criticize people for that? The person that started MADD, it was a personal thing. The people that—many—people who have come out against gun control have been personally affected by it. If somebody’s path to the truth, or somebody’s path to a place where we actually think they’re open and compassionate is a personal decision, God be with them.

Dowd fails to make any distinctions among the different ways personal experience can shape political actions. The mother who started Mothers Against Drunk Driving did not switch her position from supporting drunk-driving to opposing drunk-driving because her daughter was killed by a drunk driver. Rather her daughter’s death made her acutely aware of a problem that required greater public awareness and public policy changes.  That’s a wholly different kind of shift than Portman’s.

It is entirely possible for a personal experience to lead one to analyze and evaluate prior positions in light of new information. One would hope such analysis would not lean heavily on subjective feelings, which are woefully inadequate arbiters of truth, but would rely instead on an objective analysis of reasons and presuppositions. Sometimes we have to set aside our feelings in order to think rightly on issues of great cultural import.

There is scant evidence that Portman has thought deeply about the following critical fundamental questions, and the public has no idea how he would answer them:

Dowd stated that support for the legalization of same-sex marriage is the only compassionate response. Thankfully, Carly Fiorina, gracefully and with a humility Dowd lacks, challenged his presumptuous and self-righteous claim:

I think we have to be careful, because John Boehner’s views, which are different from Rob Portman’s views, are equally sincere. And I think we get into trouble on this debate when we assume that people who support gay marriage are open and compassion and people who don’t are not.

Both Dowd and George Will rejoiced in the apparent inevitability of the jackbooted march toward gender-irrelevant faux-marriage. Will started the unilluminating discussion with this:

[Portman] will not be the last [Republican to support same-sex marriage], because the demographic tide here is large, powerful and inexorable. I have said on this program before, opposition to gay marriage is literally dying, it’s an older demographic. And if you raise the question among young people, they’re not interested. And I dare say this is one of the good things about CPAC. As you saw at CPAC, this was another division and again, a healthy one. It’s largely young people attend CPAC. And this is not at the top of their agenda. It’s not even on their agenda.

I think that there’s been an amazing — and George is right, there has been amazing — in the last ten years, I think there’s been almost a 20-point change in people’s perception of gay marriage in this country. I think Rob Portman is another domino in this whole effect. I think Republicans, any Republicans that stand in the way of this, are standing in the way of march of history on this.

They may be right, but we’ve learned from the shifting battle over the rights of the unborn that what once seemed inevitable may not be permanent. Truth (in conjunction with tenacity) has miraculous resurrection powers.

What Dowd and Will fail to address is why our youth are so awash in ignorance. Is the issue of marriage off the agenda of our youth because some sort of organic evolution toward truth has captured not just their malleable hearts, but their minds as well?

Or are there more pernicious reasons for this strange embrace of marriage as an inherently sterile, gender-irrelevant institution?

To paraphrase Richard Weaver, ideas and images have consequences.

I don’t feel quite as certain about the uniformity of views among young conservatives as Will and Dowd do. I know some very smart young men and women who understand what marriage is and will defend it. Unfortunately, the cowardice of those  who are “literally dying” will make it that much harder for our children when they step forward to defend truth.

Help us continue the fight for pro-life, pro-marriage and pro-family values in Illinois by donating $15, $25, $50 or $100 or more today. With your support we can continue our vital work!  Click HERE to support the work and ministry of Illinois Family Institute.