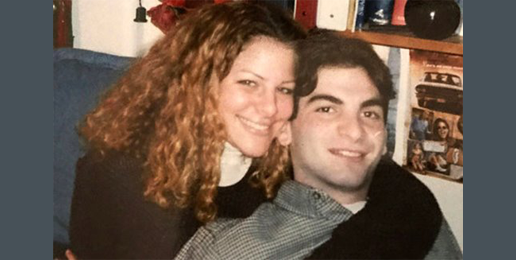 The parenting blogger “Scary Mommy” and her husband—who have three young children—are divorcing. The proximate cause of their divorce is his homoerotic desire. The ultimate cause is rebellion against God.

Scary Mommy, Jill Smokler, and her husband Jeff have been married for 17 years. In a recent interview Jeff describes his love for Jill:

Jill and I are soul mates, and I knew that very early on.…She just completed me….[O]ver the years, my sexuality became much more a part of who I was….What’s amazing to me is how in love a gay man could be with a woman….I was in love with Jill as much as anybody could be in love with anybody. And for the first seven years of our relationship, that was enough, it truly was….We want to show folks that you can do divorce in a way that not just puts your children first, but can come from a place of love. And in our case, there has never been a shortage of love.

Blog commenters defending this decision argue that the husband didn’t choose to experience homoerotic desire, that homoeroticism has always existed, and that the times they are a-changin’.

First, the fact that a person experiences powerful, seemingly persistent, and unchosen feelings does not mean that activity impelled by such feelings is intrinsically moral activity. Do we really want to defend the proposition that it is morally legitimate to act on every powerful, persistent, unchosen feeling? Yikes.

Second, divorce-defenders are right: There is nothing new under the sun. But what do people mean with such a statement? Consensual adult incest has always existed. Does the fact that it has always existed confer on it the status of a moral good?

Third, these divorce-defenders seem to suggest that the arc of morality bends ineluctably toward greater moral truth. They seem to be arguing that shifts in moral beliefs over time are always good (How they would explain the shift over time from approval of homosexuality to disapproval and back again to approval would be fascinating to hear). The inconvenient truth is that there exist objective, transcendent moral truths that do not change with the vagaries of cultural. In his book, Ideas Have Consequences, Richard Weaver wrote this:

Here’s a moral truth: Wedding vows are oaths—commitments proclaimed before God and man that a man and woman will remain united as husband and wife through the good and bad until death parts them. And such oaths entail self-denial. All lifelong married couples experience self-denial and that self-denial or self-sacrifice is not “fairly” or equally distributed.

Here’s another moral truth: Children need and deserve to have parents who are willing to sacrifice their desires for the good of their children—children for whom most parents claim they would lay down their lives. I guess setting aside homoerotic attraction is a bridge too far.

Scary Mommy’s soon to be ex-hubby (aka Selfish Daddy) told his young sons that “Mommy and Daddy are going to be happy now and happier people make better parents.”

What a self-serving, pop-psychology crock.