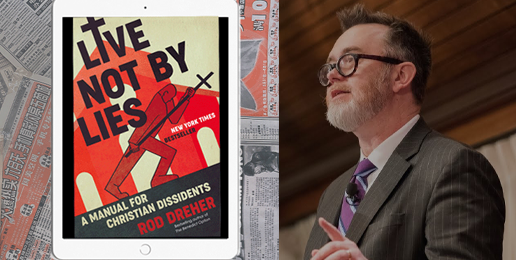 In his important new book Live Not by Lies, Rod Dreher explores the reasons so few Americans are willing to resist the pervasive and growing “soft totalitarianism” for which the left is responsible. Citing political philosopher and Holocaust survivor Hannah Arendt, Dreher establishes that all forms of totalitarianism share in common the goal of imposing an ideology, which entails supplanting or eradicating the influence of competing beliefs:

‘A totalitarian society is one in which an ideology seeks to displace all prior traditions and institutions, with the goal of bringing all aspects of society under control of that ideology. A totalitarian state is one that aspires to nothing less than defining and controlling reality. Truth is whatever the rulers say it is.’

Dreher provides evidence that this totalitarian effort to impose an ideology that redefines reality is well underway here in America:

In our time, we do not have an all-powerful state forcing this [ideology] on us. This dictatorship is far more subtle. Under soft totalitarianism, the media, academia, corporate America, and other institutions are practicing Newspeak and compelling the rest of us to engage in doublethink every day. Men have periods. The woman standing in front of you is to be called “he.” Diversity and inclusion mean excluding those who object to ideological uniformity. Equity means treating persons unequally, regardless of their skills and achievements, to achieve an ideologically correct result.

It’s not establishing itself through “hard” means like armed revolution or enforcing itself with gulags. Rather, it exercises control, at least initially, in soft forms. This totalitarianism is therapeutic. It masks its hatred of dissenters from its utopian ideology in the guise of helping and healing.

Dreher outlines some of the sociological factors that make societies vulnerable to soft totalitarianism, all of which are present in America today:

2.) “Loss of faith in hierarchies and institutions,” including “political, media, religious, legal, medical, [and] corporate” institutions

3.) The desire to transgress and destroy, with a particular preoccupation with “transgressive sexuality as a social good”

4.) “Propaganda and the willingness to believe useful lies” even when those lies advance—not truth—but a cause

5.) “A mania for ideology” that leads totalitarians to push their “ideology ever deeper into the personal realm”

6.) “A society that values loyalty more than expertise” as seen today when leftists demand “loyalty to the group or tribe,” which is “at the root of ‘cancel culture’”

7.) “Intellectuals are the revolutionary class,” which is why, Dreher argues, it is “critically important to keep an eye on intellectual discourse. Dismissing this “determined and skillful minority” as merely ‘snowflakes and social justice warriors’ is a serious mistake.”

Through interviews with Christian dissidents who lived under communist rule, Dreher offers a way to inoculate ourselves from the scourge of soft totalitarianism: We must be “willing to suffer for truth, to live not by lies,” to “reject doublethink and fight for free speech,” even if that costs us our business, a salary increase, the ability to travel, loss of reputation, or our kids’ ability to get into college.

Every decision we make comes with costs. Rationalizing conformity to lies may result in temporal ease but it comes at the cost of even greater oppression for our children and grandchildren and spiritual death. Dreher warns,

[I]f we latter-day believers are not able and willing to be faithful in the relatively small trials we face now, there is no reason to think we will have what it takes to endure serious persecution in the future.

“Without being willing to suffer, even die for Christ, it’s just hypocrisy. It’s just a search for comfort,” says Yuri Sipko, the Russian Baptist pastor. “When I meet with brothers in faith, especially young people, I ask them: name three values as Christians that you’re ready to die for. This is where you see the border between those who are serious about their faith and those who aren’t.”

When he thinks of the communist past, about Christians who were sent to prison camps and never returned, of those who were ridiculed in the world, who lost their jobs, who even in some cases had their children taken from them because of their faith, Sipko knows what gave them the strength to endure. Their ability to suffer all of this for the sake of Christ is what testified to the reality of their unseen God.

Most Christians would privately say they believe in Satan, but how many would share that belief with their unbelieving friends, neighbors, and colleagues? How many would speak to non-believers about the principalities and powers that we see daily spreading lies that damage children, adults, marriages, churches, and schools?

Most Christians would say privately they believe humans in the womb are created in the image and likeness of God and deserve not to be dismembered. How many would say or do anything publicly to stop human slaughter?

Most Christians say the chemical and surgical mutilation of biologically and anatomically healthy children, the sexual integration of private spaces and sports, and the indoctrination of children with leftist lies about “gender identity” in public schools are evil acts. How many continue to send their children to public schools where evil is promoted as truth even when they have the means to do otherwise?

Most Christians claim they believe homosexuality is not biochemically determined. But how many allow their children to be exposed to “LGBTQ”- affirming ideas and images in school and in so doing act as if ideas and images will have no effect on their children’s imagination, beliefs, and feelings about sexuality?

Most Christians claim children should not be exposed to obscene literature and perverse sexuality education. How many of those will, however, tolerate such exposure, thereby revealing their stronger conviction that obscene material is not all that bad?

Most Christians claim that marriage is by nature a sexually differentiated union. Of those, how many will attend same sex faux-marriage ceremonies and the parties that celebrate them, thereby publicly communicating respect and affirmation for such evil?

Most Christians will assert that reputation and the approval of the world does not matter to them. How many of those through their self-censorship and their eagerness to spend money that is a gift from God to send their children to colleges and universities—including Ivy League schools—that love evil and hate truth, thereby revealing that worldly success is a foremost goal.

Dreher concludes with this exhortation:

The kind of Christians we will be in the time of testing depends on the kind of Christians we are today. … To recognize the value in suffering is to rediscover a core teaching of historical Christians, and to see clearly the pilgrim path walked by every generation of Christians since the Twelve Apostles. There is nothing more important than this when building up Christian resistance to the coming totalitarianism. It is also to declare oneself a kind of savage in today’s culture—even within the culture of the church. It requires standing foursquare against much of popular Christianity, which has become a shallow self-help cult whose chief aim is not cultivating discipleship but rooting out personal anxieties. But to refuse to see suffering as a means of sanctification is to surrender, in Huxley’s withering phrase, to “Christianity without tears.”

Christianity without tears, persecution, sacrifice, and suffering is not what Christ promises those who choose to follow him on the narrow pilgrim’s path.