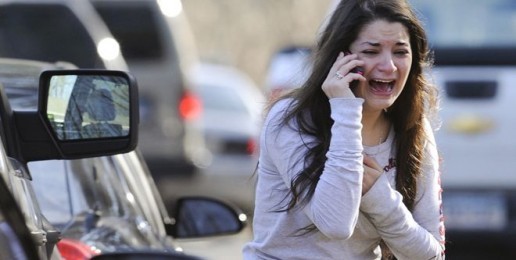 Thus says the LORD:  “A voice is heard in Ramah, lamentation and bitter weeping. Rachel is weeping for her children; she refuses to be comforted for her children, because they are no more.”[Jeremiah 31:15]

It has happened again. This time tragedy came to Connecticut, where a lone gunman entered two classrooms at Sandy Hook Elementary School in Newtown and opened fire, killing at least twenty children and six adults, before turning his weapons of death upon himself. The young victims, still to be officially identified, ranged in age from five to ten years. The murderer was himself young, reported to be twenty years old. According to press reports, he murdered his mother, a teacher at Sandy Hook, in her home before the rampage at the school.

Apparently, matricide preceded mass murder. Some of the children were in kindergarten, not even able to tie their own shoes. The word kindergarten comes from the German, meaning a garden for children. Sandy Hook Elementary School was no garden today. It was a place of murder, mayhem, and undisguised evil.

The calculated and premeditated nature of this crime, combined with the horror of at least twenty murdered children, makes the news almost unspeakable and unbearable. The grief of parents and loved ones in Newtown is beyond words. Yet, even in the face of such a tragedy, Christians must speak. We will have to speak in public about this evil, and we will have to speak in private about this horrible crime. How should Christians think and pray in the aftermath of such a colossal crime?

We Affirm the Sinfulness of Sin, and the Full Reality of Human Evil

First, we must recognize that this tragedy is just as evil, horrible, and ugly as it appears. Christianity does not deny the reality and power of evil, but instead calls evil by its necessary names — murder, massacre, killing, homicide, slaughter. The closer we look at this tragedy, the more it will appear unfathomable and more grotesque than the human imagination can take in.

What else can we say about the murder of children and their teachers? How can we understand the evil of killing little children one by one, forcing them to watch their little friends die and realizing that they were to be next? How can we bear this?

Resisting our instinct toward a coping mechanism, we cannot accept the inevitable claims that this young murderer is to be understood as merely sick. His heinous acts will be dismissed and minimized by some as the result of psychiatric or psychological causation, or mitigated by cultural, economic, political, or emotional factors. His crimes were sick beyond words, and he was undoubtedly unbalanced, but he pulled off a cold, calculated, and premeditated crime, monstrous in its design and accomplishment.

Christians know that this is the result of sin and the horrifying effects of The Fall. Every answer for this evil must affirm the reality and power of sin. The sinfulness of sin is never more clearly revealed than when we look into the heart of a crime like this and see the hatred toward God that precedes the murderous hatred he poured out on his little victims.

The twentieth century forced us to see the ovens of the Nazi death camps, the killing fields of Cambodia, the inhumanity of the Soviet gulags, and the failure of the world to stop such atrocities before they happened. We cannot talk of our times without reference to Adolf Hitler and Josef Stalin, Pol Pot and Charles Manson, Idi Amin and Ted Bundy. More recently, we see evil in the impassive faces of Osama bin Laden and Anders Behring Brevik. We will now add yet another name to the roll call of mass murderers. His will not be the last.

The prophet Jeremiah knew the wickedness and deceit of the sinful human heart and asked the right question — who can understand it?

Beyond this, the Christian must affirm the grace of moral restraint, knowing that the real question is not why some isolated persons commit such crimes, but why such massacres are not more common. We must be thankful for the restraint of the law, operating on the human conscience. Such a crime serves to warn us that putting a curve in the law will inevitably produce a curve in the conscience. We must be thankful for the restraining grace of God that limits human evil and, rightly understood, keeps us all from killing each other.

Christians call evil what it is, never deny its horror and power, and remain ever thankful that evil will not have its full sway, or the last word.

There is one and only one reason that evil does not have the last word, and that is the fact that evil, sin, death, and the devil were defeated at the cross of the Lord Jesus Christ. There they were defeated conclusively, comprehensively, and publicly.

On the cross, Christ bore our sins, dying in our place, offering himself freely as the perfect sacrifice for sin. The devil delighted in Christ’s agony and death on the cross, realizing too late that Christ’s substitutionary atonement spelled the devil’s own defeat and utter destruction.

Christ’s victory over sin, evil, and death was declared by the Father in raising Jesus from the dead. The resurrection of Christ is the ground of our hope and the assurance of the final and total victory of Christ over all powers, principalities, and perpetrators.

A tragedy like this cannot be answered with superficial and sentimental Christian emotivism, nor with glib dismissals of the enormity and transience of this crime. Such a tragedy calls for the most Gospel-centered Christian thinking, for the substance of biblical theology, and the solace that only the full wealth of Christian conviction can provide.

In the face of such horror, we are driven again and again to the cross and resurrection of Christ, knowing that the reconciling power of God in Christ is the only adequate answer to such a depraved and diabolical power.

We Acknowledge the Necessity of Justice, Knowing that Perfect Justice Awaits the Day of the Lord

Charles Manson sits in a California prison, even now — decades after his murderous crimes were committed. Ted Bundy was executed by the State of Florida for multiple murders, but escaped both conviction and punishment for others he is suspected of having committed. Anders Behring Brevik shot and killed scores of young people in Norway, but he was sentenced to less than thirty years in prison. Adolf Hitler took his own life, robbing human courts of their justice, and Vladimir Lenin died of natural causes.

The young murderer in Connecticut took his own life after murdering almost thirty people, most of them children. He will never face a human court, never have to face a human accuser, never stand convicted of his crimes, and never know the justice of a human sentence.

But, even as human society was robbed of the satisfaction of that justice, it would never be enough. Even if executed for his crimes, he could die only once. Even if sentenced to scores of life sentences to prison, he could forfeit only one human lifespan.

Human justice is necessary, but it is woefully incomplete. No human court can hand down an adequate sentence for such a crime, and no human judge can restore life to those who were murdered.

Crimes such as these remind us that we just yearn for the total satisfaction that will come only on the Day of the Lord, when all flesh will be judged by the only Judge who will rule with perfect righteousness and justice. On that day, the only escape will be refuge in Christ, for those who knew and confessed him as Savior and Lord. On that day, those who are in Christ will know the promise that full justice and restoration will mean that every eye is dry and tears are nevermore.

We Grieve with Those Who Grieve

For now, even as we yearn for the Day of the Lord, we grieve with those who grieve. We sit with them and pray for them and acknowledge that their loss is truly unspeakable and that their tears are unspeakably true. We pray and look for openings for grace and the hope of the gospel. We do our best to speak words of truth, love, grace, and comfort.

What of the eternal destiny of these sweet children? There is no specific text of Scripture that gives us a clear and direct answer. We must affirm with the Bible that we are conceived in sin and, as sons and daughters of Adam, will face eternal damnation unless we are found in Christ. So many of these little victims died before reaching any real knowledge of their own sinfulness and need for Christ. They, like those who die in infancy and those who suffer severe mental incapacitation, never really have the opportunity to know their need as sinners and the provision of Christ as Savior.

They are in a categorically different position than that of the person of adult consciousness who never responds in faith to the message of the Gospel. In the book of Deuteronomy, God tells the adults among the Children of Israel that, due to their sin and rebellion, they would not enter the land of promise. But the Lord then said this:

“And as for your little ones, who you said would become a prey, and your children, who today have no knowledge of good or evil, they shall go in there. And to them I will give it, and they shall possess it.” [Deuteronomy 1:39]

Many, if not all, of the little children who died in Newtown were so young that they certainly would be included among those who, like the little Israelites, “have no knowledge of good or evil.” God is sovereign, and he was not surprised that these little ones died so soon. There is biblical precedent for believing that the Lord made provision for them in the atonement accomplished by Christ, and that they are safe with Jesus.

Rachel Weeping for Her Children

The prophet Jeremiah’s reference to Rachel and her lost children is heart-breaking. “Thus says the LORD:  ‘A voice is heard in Ramah, lamentation and bitter weeping. Rachel is weeping for her children; she refuses to be comforted for her children, because they are no more.’” Like Rachel, many parents, grandparents, and loved ones are weeping inconsolably even now, refusing to be comforted for their children, because they are no more.

This tragedy is compounded in emotional force by the fact that it comes in such close proximity to Christmas, but let us never forget that there was the mass murder of children in the Christmas story as well. King Herod’s murderous decree that all baby boys under two years of age should be killed prompted Matthew to cite this very verse from Jeremiah. Rachel again was weeping for her children.

But this is not where either Jeremiah or Matthew leaves us. By God’s mercy, there is hope and the promise of full restoration in Christ.

The Lord continued to speak through Jeremiah:

God, not the murderer, has the last word. For those in Christ, there is the promise of full restoration. Even in the face of such unmitigated horror, there is hope.“There is hope for your future, declares the Lord, and your children shall come back to your own country.”