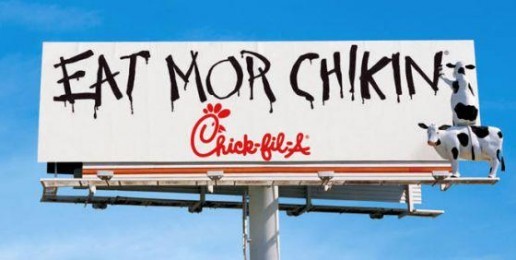 The Jim Henson Company (yes, the Muppet creators) has decided to stop working with Chick-fil-A and to donate the money it received from its work with Chick-fil-A to the Gay and Lesbian Alliance Against Defamation. This is what “progressives” truly think: Anyone who expresses the view that marriage is the union of one man and one woman is guilty of defamatory and hateful acts.

Some homosexual activists know no bounds when it comes to their arrogant demand that all of society accept their unproven, non-factual moral views. Some have organized the “National Same-Sex Kiss Day at Chick-Fil-A” for August 3. It’s offensive enough that a National Same-Sex Kiss Day exists at all, but for homosexual activists to urge homosexuals to go to a family restaurant that they know is patronized by conservative Christian families and kiss is an arrogant outrage. This exposes the lie that they are a poor, pitiful, powerless minority group.

This campaign reveals the truth that many homosexual activists are guilty of the same sins of which the rest of us mere mortals are guilty: They are often intolerant, uncivil, manipulative, ignorant, obscene, and hateful.

One thing that homosexual activists are consistently guilty of is misrepresenting the beliefs, feelings, and claims of conservatives, screeching “hater” at anyone who expresses moral and ontological views on volitional homosexual acts with which they disagree.

And why do they screech “hater”? They do because it works. It effectively silences dissent by creating fear and embarrassment in those who have not taken the time to study the issue and who don’t trust the God they claim to serve.

I received a troubling email from a very bright, well-educated, compassionate friend of my son regarding the abandonment of sound biblical doctrine on homosexuality by his evangelical Christian peers, many of whom have earned advanced degrees from prestigious conservative theology programs. This young man has a B.A. in Philosophy and Theology, an M.A. in Systematic and Historical Theology, and is working on his M.Div.

I’m pretty sure I have told you before, but I’m very thankful for the work you are doing. I’ve been greatly saddened recently as it seems more and more of my _______ grad friends are posting things on Facebook suggesting that promoting gay marriage is a justice issue Christians should be fighting for, and that people like Obama are heroic for coming out in support of it. I despise the fact that a warmed over secular liberalism is now passing for Christian compassion in the minds of many I graduated from ______ with. I’ve seen and experienced the apathy and cowardice that you’ve mentioned, and I don’t ever want to fall into the same.

Thanks very much for your expression of appreciation. I do what little I can but so much of the burden to convey truth will soon fall to your generation, which has been shaped by cultural institutions in thrall to deception.

I hear in the mainstream press that many in the culture—including Christians and conservatives—are becoming supporters of civil unions, “same-sex marriage,” and the normalization of homosexuality. And yet there’s rarely any discussion of the reasons for such a cultural transformation. The issue is treated as if it’s just a logical, ineluctable evolutionary progression. But might the de facto censorship of conservative ideas in the arts, academia, and mainstream press have something to do with this shift?

I’m regularly interviewed by high school and college journalism students, including from two of the top journalism schools in the country (i.e., Medill and the University of Missouri). I’m continually amazed at the embarrassing ignorance and superficial thinking of bright college students. They’ve put almost no critical thought into “progressive” presuppositions. And they’ve never read the work of or even heard the names of conservative scholars who are writing on the issue. Such is the commitment of academia to critical thinking and diversity.

Now, due to the apathy, ignorance, and cowardice of my generation, including lay Christians; pastors; professors in all manner of disciplines, including theology; and politicians, we will bequeath to you a culture of greater ignorance, diminished liberty, and greater persecution. I hope and pray that God will raise up some Davids to courageously speak truth even in the face of hatred or (God forbid) imprisonment.

And I wish Christians would start acting as if they believed their beliefs were objectively true instead expressing them timorously, awkwardly, defensively, or self-consciously. Through acts of imagination and will, we need to remember that though affirming same-sex attraction may—and I emphasize may—facilitate temporal pleasure, it will most assuredly result in eternal damnation. It boggles the mind that Christians can be complicit in that affirmation and call it love or justice.

The most serious problem is the abandonment by Christians of the clear teaching of the Bible on homosexuality and marriage. Another problem, however, is that few Christian young people could effectively identify the weaknesses in virtually every proposition—religious and secular—used to normalize homosexuality. I would recommend that churches and Christian colleges start preparing their students to understand and refute the specious arguments they encounter daily in conversations with friends and family, in the films and television programs they watch, and in academia and the mainstream press. As it stands now, few of them could argue their way out of a paper bag.

And while you’re waiting for your children to be educated, feed them at Chick-fil-A.