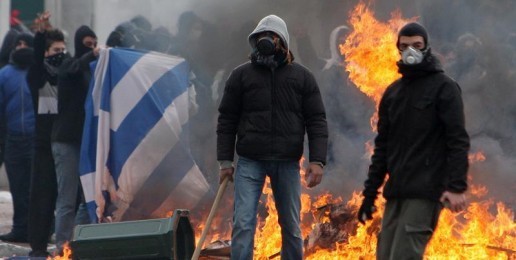 The suicide of a Greek pharmacist has triggered reaction around the world, and has focused attention on the economic crisis in Greece and the European Union.  However, it appears that many will take the wrong lesson from it.  There will be calls for increased taxes and spending to “protect” citizens from such an end.  That would be most foolish.

Dimitris Christoulas’ suicide in Athens this past Wednesday was both tragic and portentous, as many nations, including the United States, are following Greece down the same pathway toward insolvency.  Mr. Christoulas sadly believed himself to be between a rock and a hard place and decided it was quite literally impossible to survive in a dignified fashion.  He declared that he would not lower himself to pick food out of the garbage.

While there are many lessons which may be drawn from his tragic situation and choice, it seems that one all of us ought to learn is that it is dangerous to become dependent upon politicians to provide one’s daily sustenance and dignity.  It is an understatement of the highest order to say that politicians and governments are notoriously unreliable to meet such obligations.  Those of us in Illinois and especially Chicago ought to need no further instruction in such things.  If you are at all attuned to events in this state,  you are aware that numerous pension funds are grossly underfunded.  Why?  Because politicians spent the money elsewhere.  Why are Medicare and Medicaid underfunded?  Because politicians spent the money on other things.  Why is Social Security going under?  Because politicians opened the “lock-box” and spent the money on other things.  Do you get the picture?  If you are a teacher or police officer, are there rumblings about the security of your retirement?  Enough said.

It is imperative that we understand how these things came about, and what we as individual citizens must do to protect ourselves.  It is a first truth that government is incapable of protecting our personal needs.  No one else has nearly as much interest in our futures and our children’s futures as we do.  Politicians, many of whom may be very well intentioned, will not and cannot have the same interest and concern for us as we do.  And politicians know they can buy power and influence with the wealth they confiscate from us as taxes.  Do not be fooled, that will never change.

There will be those who will call for higher taxes.  Demands for the wealthy to “pay their fair share” will multiply.  But we must come to terms with reality: There simply is not enough money to cover the promises our politicians have made.  If you confiscate all the wealth of the rich it is not enough.  And then, having done that, what will you do next year?  If you double the taxes on the rich, it will not come close to covering these obligations.  There is simply no painless way out of the mess these elected officials have created.

If you gave your child five dollars for school lunch, but found he was daily spending it on candy, would you keep giving him the five dollars?  If you gave your teen $20 for admission to an activity but found he spent it on drugs, would you give him another $20?  If your neighbor, in a crisis, asked you for $400 to keep him from losing his house, but you discovered he gambled it away in Las Vegas, would you give him $500 next month?  Why, after years of watching our elected officials misspend and waste multiplied billions of dollars, would you even consider reelecting officials who are demanding increased taxes from us?  They have proven repeatedly that they are incapable of wisely using our tax dollars!

It is also important that we, as voters, accept our responsibility in this.  The blame for the economic debacle we find ourselves in does not lie solely at the feet of elected officials, but equally at the feet of many Chicago and Cook County voters.  Any objective observer of Chicago land political affairs would have to ask the obvious question: Why are these corrupt and inept officials returned to office year after year and decade after decade?  The answer of course is simple.  Multitudes of voters have made themselves dependent upon these corrupt politicians for their jobs.  The voter’s livelihood depends upon keeping certain politicians in office.  And, so we all suffer, and down the road many here may face the same horrendous dilemma Mr. Christoulas faced.

So, what’s to be done?  First and foremost, we must take responsibility for our own lives and those of our families.  We must seek to rebuild the only institution that has through the centuries proven itself able to care for individuals, and that is the natural family.  We must resist every effort to undermine it.

Second, we must invest in our own and our children’s futures.  There is no room for apathy and laziness here.  The current events in Europe, especially in Greece should be sufficient to convince us of the necessity of taking personal control of things such as our retirements.  There must be no misunderstanding in this.  When the government money runs out, you simply cannot create it from thin air.  Do not think that the government printing more money can fix this.  The inflation such printing creates robs from everyone, especially the poor.  If you really care for those who are most vulnerable, you cannot condone a government inflating its way out of insolvency.

When the Huns invaded other nations, they would on occasion find themselves in need of nourishment.  If other sources failed, they would drink the blood of their powerful war horses;  However, this could only be done in moderation or they would undermine their war effort.  Even those great horses could only survive so much blood-letting.  We must understand that taxing the wealthy also has limits.  Just as a powerful horse could be crippled by over-bleeding it, so, an economy will be damaged by over-taxation.

In the end, envy of the rich, and seeking to hurt those who create wealth by their entrepreneurial spirit will come back to haunt all of us.  It is far wiser to take responsibility for our own well-being, learn the habits of hard work, thrift, frugality and integrity, and depend far less upon the promises and platitudes of those who seek our votes.

As President Ronald Reagan noted, “I’m from the government and I’m here to help” are still rather frightening words.