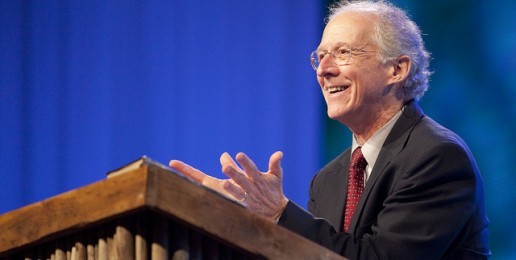 An article  in the Star Tribune titled “Key Minnesota Pastors Opt Out of Marriage Fight” grossly misrepresents  how Pastor John Piper is addressing the November vote on a proposed marriage amendment to the Minnesota Constitution.

Two key conservative evangelical leaders in Minnesota are not endorsing the marriage amendment or directing followers to vote for it, marking the first time during debate over the measure that major faith leaders have not encouraged members to take a stand on the issue.

Influential preacher and theologian the Rev. John Piper came out against gay marriage during a sermon Sunday but did not explicitly urge members of his Minneapolis church to vote for the amendment.

It’s clear that Piper did, indeed, direct his church members to vote for the proposed marriage amendment. He did so by explaining how to think through this critical cultural issue biblically and logically, rather than merely telling them what to do in the voting booth.

Below are some excerpts from Piper’s recent sermon (which everyone should listen to) on the marriage amendment, from which French conveniently did not quote:

Today’s message is…designed to give a biblical vision of marriage in relation to homosexuality, and in relation to the proposed Marriage Amendment in Minnesota. I asked that Hebrews 13:1–6 be read not because I will give an exposition of it, but to highlight that one phrase in verse 4: “Let marriage be held in honor among all.”

There is no such thing as so-called same-sex marriage, and it would be wise not to call it that.

The point here is not only that so-called same-sex marriage shouldn’t exist, but that it doesn’t and it can’t. Those who believe that God has spoken to us truthfully in the Bible should not concede that the committed, life-long partnership and sexual relations of two men or two women is marriage. It isn’t. God has created and defined marriage. And what he has joined together in that creation and that definition, cannot be separated, and still called marriage in God’s eyes.

[I]t would contradict love and contradict the gospel of Jesus to approve homosexual practice, whether by silence, or by endorsing so-called same-sex marriage, or by affirming the Christian ordination of practicing homosexuals.

We must not be intimidated here. The world is going to say the opposite of what is true here. They are going to say that warning people who practice homosexuality about final judgment is hateful. It is not hateful. Hate does not want people to be saved. Hate does not want people to join the family. Hate wants to destroy. And sin does destroy. If homosexual practice (and greed and idolatry and reviling and drunkenness) leads to exclusion from the kingdom of God — as the word of God says it does — then love warns. Love pleads. Love comes alongside and does all it can to help a person live — forever.

Deciding what actions will be made legal or illegal through civil law is a moral activity aiming at the public good and informed by the worldview of each participant.

How should Christian citizens decide which of their views they should seek to put into law? Which moral convictions should Christians seek to pass as legal requirements? Christians believe it is immoral to covet and to steal. But we seek to pass laws against stealing, not against coveting. One of the principles at work here seems to be: the line connecting coveting with damage to the public good is not clear enough. No doubt there is such a connection. God can see it and the public good would, we believe, be greatly enhanced if covetousness were overcome. But finite humans can’t see it clearly enough to regulate coveting with laws and penalties. This is why we have to leave hundreds of immoral acts for Jesus to sort out when he comes.

Laws exist to preserve and enhance the public good. Which means that all laws are based on some conception of what is good for us. Which means that all legislation and all voting is a moral activity. It is based on choices about what is good for the public. And those choices are always informed by a world view. And in that worldview — whether conscious or not — there are views of ultimate reality that determine what a person thinks the public good is.

Which means that all legislation is the legislation of morality. Someone’s view of what is good — what is moral — wins the minds of the majority and carries the day. The question is: Which actions hurt the common good or enhance the common good so much that the one should be prohibited by law and the other should be required by law?

Here are a few thoughts to help you with that question.

To summarize, Piper said, among other things, the following:

French must not have listened to or read Piper’s wise and compassionate sermon because no thinking person could hear or read his words and conclude that Piper has opted out of the fight for marriage. In unequivocal language, Piper provided clear guidance to Christians on the issue of amending constitutions to protect marriage.

Piper concluded by saying, “If the whole counsel of God is preached with power week in and week out, Christians who are citizens of heaven and citizens of this democratic order will be energized as they ought to speak and act for the common good.” If this is what “opting out of the marriage fight” looks like, let’s hope and pray that countless pastors across the country opt out as John Piper has done.

Were the Capitol Rioters Christ-Followers?