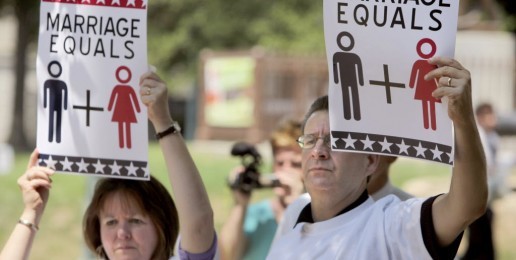 The New Jersey State Senate chose to defend natural marriage last Thursday when a vote was taken on a bill to legalize homosexual so-called “marriage.” The 20-14 vote defeating the measure continues a growing string of victories in defense of traditional marriage, including the defeat of a similar bill in New York and the veto by the people of a homosexual so-called “marriage” bill in Maine last November. Same-sex “marriage” activists plan to take their fight to the courts where they hope to find an activist judge. Unfortunately, this route has been the most successful for them.

Meanwhile, the fate of the successful Proposition 8 in California is now before the federal court system. Unwilling to accept the fact that a majority of voters in California have said marriage is between a man and woman, radical liberal activists will try and overturn the law. Alliance Defense Fund (ADF) attorneys are serving as defense counsel and the Family Research Council (FRC) has filed a friend of the court brief on behalf of the voter-approved law.

On Monday, the trial before U.S. District Judge Vaughn Walker in San Francisco began, and will not only determine the fate of Proposition 8, but could force every state to allow homosexual so-called “marriage.” The case is likely to end up before the U.S. Supreme Court and determine the constitutionality of laws and constitutional amendments in all states protecting the traditional definition of marriage.

Click HERE to read a detailed account of the first day of testimony from Andy Pugno, general counsel of ProtectMarriage.com, the group that sponsored Prop 8.

A Look Ahead
Perry – already dubbed the Roe v. Wade of the marriage issue, is expected to last for several weeks. And once a decision is handed down by Judge Walker, it is expected to be appealed and ultimately decided by the United States Supreme Court.