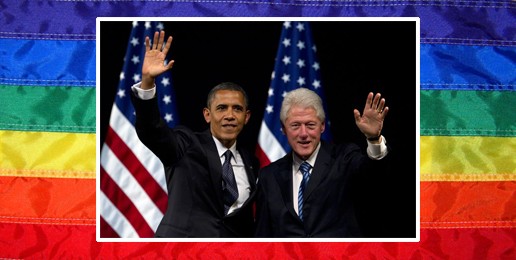 Retiring open homosexual U.S Congressman Barney Frank (D-MA), has told the Washington Blade that the 15-member panel of the Democratic Party platform committee unanimously approved language calling for the unraveling of marriage via support for same-sex marriage. This is an historic policy shift that is in disagreement with the views of many Democrats.

Ironically, the platform will be voted upon during the party’s convention later this summer in North Carolina, the 32nd state adopt a marriage protection amendment that seeks to give the next generation the best shot at having both a mom and a dad.   Many observers believe that President Obama’s admission that he supports the undefining of marriage, and now this liberal platform plank, will cost him that state this fall.   Democrat support of homosexual marriage will hand those electoral delegates to Mitt Romney who understands that men and women are different and therefore both are vital, irreplaceable components of the family.

This position is also causing enthusiasm problems for the President among African-Americans who for decades have seen the devaluing of marriage and its negative implications throughout their communities.   Other segments of Democrat voters, particularly those with a faith basis or heritage, may also have problems with this move against traditional family values.

The Obama administration is clearly taking a gamble that this platform move will generate more campaign money from homosexual activists and campaign enthusiasm among liberals.   The risk is that it will alienate too many marginal Democrat voters and independents.