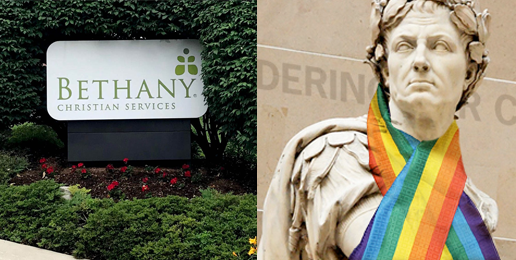 It should come as a surprise to no one that the formally Christian childcare agency Bethany Christian Services has fully capitulated to homosexual activists and Big Brother—also known by Jesus as Caesar—in deciding to place children in the homes of homosexuals for fostering and adoption in all 32 states where it operates.

It should come as no surprise because the 77-year-old Bethany Christian Services, “the largest Protestant adoption and foster agency in the United States,” began capitulating several years ago when homosexuals began demanding children from Bethany, first in Philadelphia and then in Michigan.

What might surprise Christians is the sophistry Bethany now employs to rationalize their decision that will inarguably harm children temporally and likely eternally.

Faith in Jesus is at the core of our mission. But we are not claiming a position on the various doctrinal issues about which Christians of mutual good faith may disagree. … We acknowledge that discussions about doctrine are important, but our sole job is to determine if a family can provide a safe, stable environment for children.

Word to Bult, faith in Jesus should never be separated from the work of Christians. It should inform every decision they make, especially in the kind of work Bethany does. Faith in Jesus requires accepting God’s Word as unalterable, objective, transcendent, eternal truth and includes everything the Bible says about homosexuality, marriage, and raising children.

We learn in God’s holy Word that God destroyed two cities, centrally because of rampant homosexuality. We learn how serious a sin God views homosexuality because he includes it in verses about two other serious sins: bestiality and incest. We learn from Jesus himself that marriage is the union of one man and one woman. We learn that those who engage in homosexuality will not see the kingdom of heaven. And we are commanded to train up our children in the way they should go.

Two men or two women who believe marriage has no intrinsic nature central to which is sexual differentiation and who believe homosexual acts are moral acts cannot possibly raise up a child in the way they should go. In reality, they will raise up children to believe that evil is good. They will teach children the lie that “love is love”—a lie that if affirmed as good and true may cost children their eternal lives.

Doctrinal issues regarding the ontology and teleology of marriage and the morality of homoerotic acts are not issues about which “Christians of mutual good faith” may disagree. They are foundational issues, and those who disagree with theologically orthodox views are apostates or heretics.

Marriage is a picture of Christ—the bridegroom—and the church—his bride. A homoerotic union composed of two people of the same sex suggests that there is no difference in nature or function between Christ and the church, which is a heretical notion.

But no worries to Bethany leaders. They get to keep Caesar’s money if they render unto Caesar what is God’s.

The New York Times reports that Bethany president Chris Palusky claims that Bethany’s decision to place infants and children in the homes of men and women who affirm acts that God detests is consonant with remaining “steadfast” in its “Christian faith” and “furthers” its mission to provide “safe homes” to vulnerable children.

Interesting side note about Palusky: He held a senior leadership position with World Vision in 2014 when World Vision announced its controversial decision to hire employees in homosexual relationships. The decision was so controversial, World Vision reversed it in two days. Four years later, in 2018, Palusky unfortunately landed at Bethany Christian Services.

Bethany passed an “inclusivity” policy this past January that omits this position statement in place since 2007:

God’s design for the family is a covenant and lifelong marriage of one man and one woman.

Would an organization that remains steadfast in its Christian faith and whose faith in Jesus remains at it core remove Jesus’ definition of marriage and replace it with a policy that permits children to be placed in the homes of unrepentant homosexuals?

In making its decision to render unto Caesar God’s children and, in practice, to embrace heretical doctrinal positions, did Bethany consult Scripture? Nope. Bethany hired the Barna Group to poll 667 “self-identified” Christians:

Barna found 55% of Christians said either that sexual preference should not determine who can foster or adopt, or that it was better for children to be in an LGBTQ home than in foster care. The survey also found that 76% of self-identified Christians agree, at least somewhat, that it would be better for Christian agencies to comply with government requirements pertaining to the LGBTQ community rather than shut down.

Well, there you have it: a childcare organization at the core of which is purportedly Jesus uses a poll to help determine whether it should place children in the homes of men and women who affirm sin as good.

A false dichotomy appears to be implicit in the questions posed to the 667 self-identified Christians. The choices available to Bethany are not limited either to capitulating to homosexuals and Caesar or shutting down.

There is a third option available to organizations for whom steadfast faith in and obedience to Jesus Christ is truly central to their mission: They can disengage from Caesar. Bethany could refuse government money and all its attached un-sanctifying, damning strings dangling so temptingly before them.

Enquiring minds want to know if Bethany—fully committed to Christ and his kingdom as it is—will soon place children in the homes of men who pretend to be women? What about in the homes of homosexual “throuples” like the one from San Diego (whose book Amazon is not banning)? This particular “throuple”—three men who fought successfully to have all three of their names listed on their children’s birth certificates—didn’t need to adopt. Instead, they purchased genetic material and rented wombs. But other “throuples,” “quadrouples,” or “septouples” may not have the resources for purchasing genetic material. Will Bethany one day place vulnerable children with such families? If not, why not? 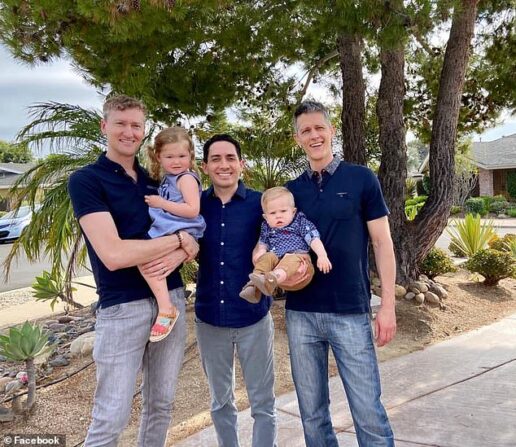 While a Barna poll may show over half of self-identifying Christians currently oppose such placements, just wait awhile and poll them again.

It makes a difference!